After remaining shut for over five months due to the COVID-19 pandemic, metro train services resumed in most of the cities on Monday on a cautious note amid a slew of measures for the safety of passengers and staff. 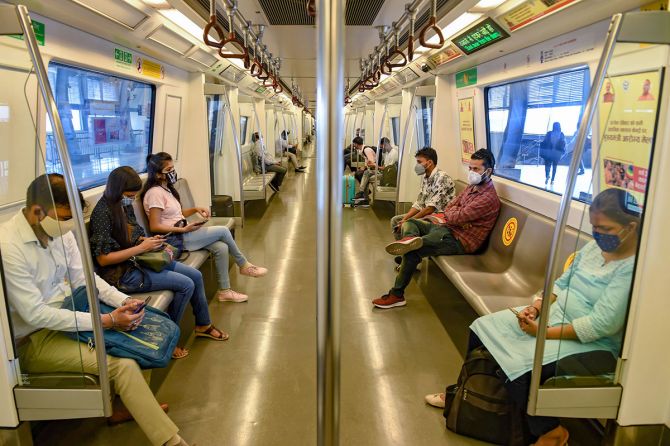 With the Centre issuing guidelines for their resumption under Unlock 4, the rapid transit networks started operations in a graded manner in Delhi-NCR, Lucknow, Kochi, Chennai, Hyderabad, Bengaluru and Ahmedabad, but were still closed in Mumbai, Nagpur, Kolkata and Jaipur.

Passenger traffic was thin on the first day as many commuters said that they were still not sure if taking public transport was safe due to the risk of infection.

Stickers and markings were seen both in trains and on platforms so that passengers maintain social distancing.

Around 15,500 commuters travelled on the Delhi Metro, which had an average daily ridership of over 26 lakh before COVID-19. Around 6,000 people boarded Lucknow metro trains, as against over 70,000 in pre-lockdown days.

Metro authorities said that they were encouraging commuters to go for cashless/online ticket transactions.

In Delhi and Bengaluru, all passengers were asked to use smart cards as no tokens were being sold.

On the station premises, passengers were permitted to enter the concourse only after temperature checks with thermal guns and sanitisation of hands. 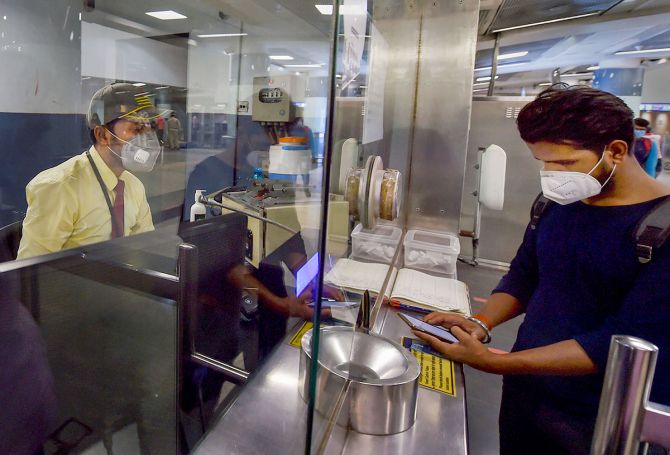 Tamil Nadu Industries Minister M C Sampath was among those who boarded the first Chennai metro train that departed from the airport to Washermenpet at 7 am. He travelled up to Nandanam station.

Train stoppage time at stations has been increased from 20 seconds to 50 seconds to facilitate passengers to de-board and board by maintaining social distancing and also to ensure fresh air circulation, officials said.

Authorities had already announced that services will be open till 8 pm and there will be no inter-corridor movement between Central Metro and Airport stations requesting passengers to plan their journeys accordingly. 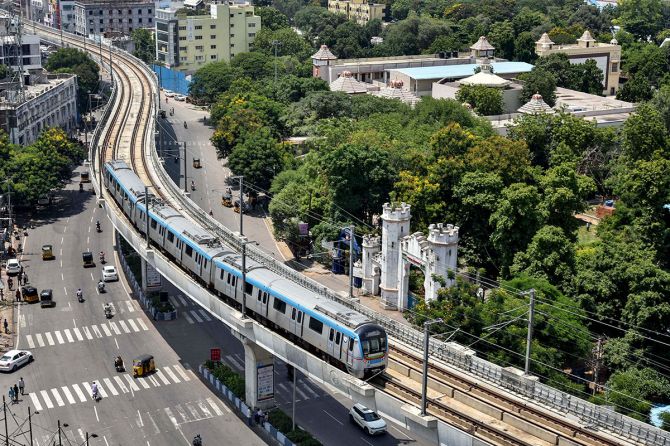 In the national capital, platforms and hub stations, including Rajiv Chowk, wore a deserted look.

'A few happy faces from our first journey after more than 5 months. #MetroBackOnTrack,' the Delhi Metro Rail Corporation (DMRC) said in a tweet and posted pictures. 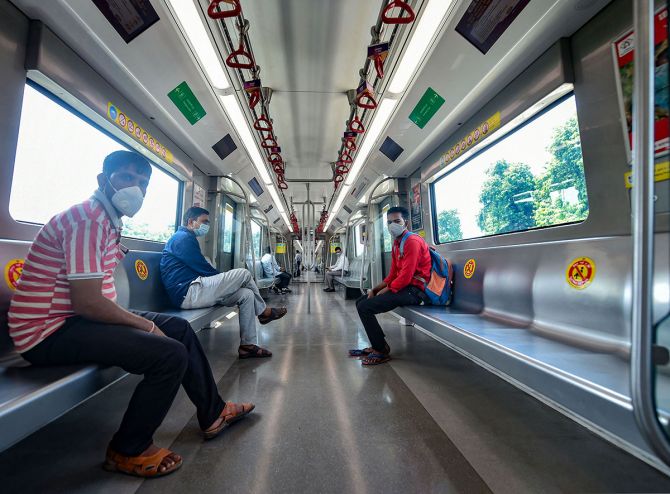 Several announcements about dos and dont's during COVID-19 were being made.

Trains will operate in batches from 7-11 am in the morning and 4-8 pm in the evening, officials said. 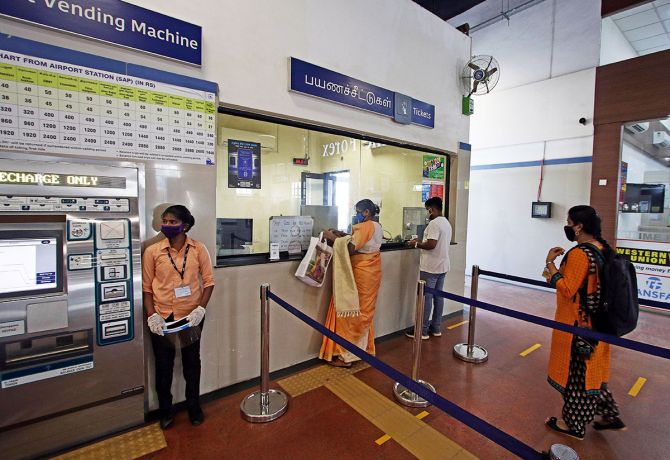 IMAGE: Commuters stand in a queue to recharge their metro card as the Chennai Metro Rail Limited (CMRL) resumes its operations in a graded manner after relaxation in COVID-19 lockdown, on Monday. Photograph: Anantha Krishnan/ANI Photo

"Of course, I was quite sceptical but we will have to eventually take metro. How long can we avoid it? I hardly saw less than 10 passengers in my compartment but it was smooth," said Sumitra Devi, 45, a government employee who works at Connaught Place adjoining the Rajiv Chowk metro station.

She said ever since the lockdown was lifted, she faced a lot of difficulties while commuting to work. Devi said the metro ride was 'definitely different but safe'.

Many commuters said the closure of several entry-exit gates caused delays and inconvenience. 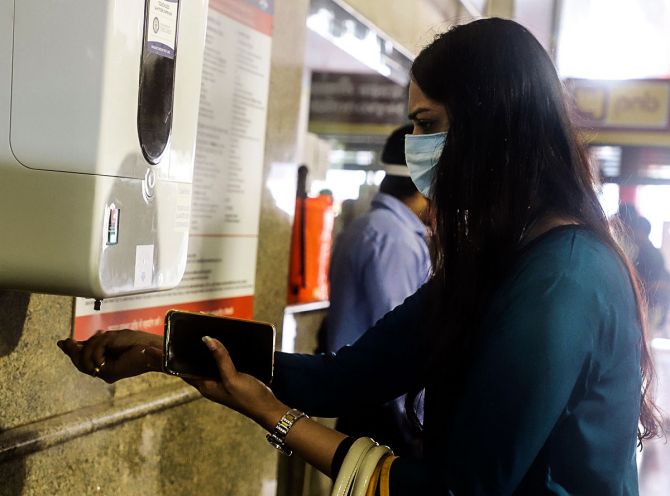 IMAGE: A passenger sanitises her hands before entering a metro station, in Gurugram, on Monday. Photograph: Manoj Kumar/ANI photo

The Lucknow Metro resumed services at 6 AM at all 16 stations with a thin crowd but the number of passengers increased later in the day, Uttar Pradesh Metro Rail Corporation PRO Panchanan Mishra told PTI.

The Lucknow Metro became the first metro service in the country to use ultraviolet (UV) technology for token sanitisation to ensure the safety of passengers, he said.

Passengers can buy tickets online with a GoSmart card, he said. A GoSmart user has a contactless trip right from entering the metro station, boarding the train to exiting the premises. 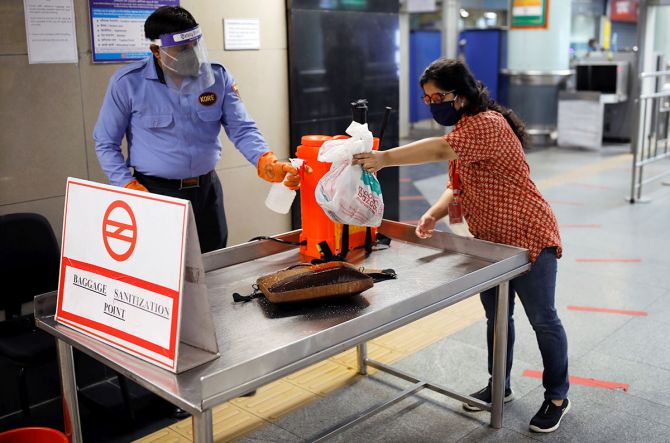 As part of Unlock 4.0, Metro Rail services in Bengaluru started operations on the Purple Line from Byappanahalli station at 8 am towards Mysuru Road and vice versa.

Karnataka Health Minister B Sriramulu also travelled in a metro train to review the preparedness.

"The six-coach train from Byappanahalli had 12 passengers whereas 15 to 16 passengers boarded the train at the Nayandahalli station on Mysuru Road," a Bengaluru Metro Rail Corporation Limited (BMRCL) official told PTI.

The official said people appear to be very cautious. 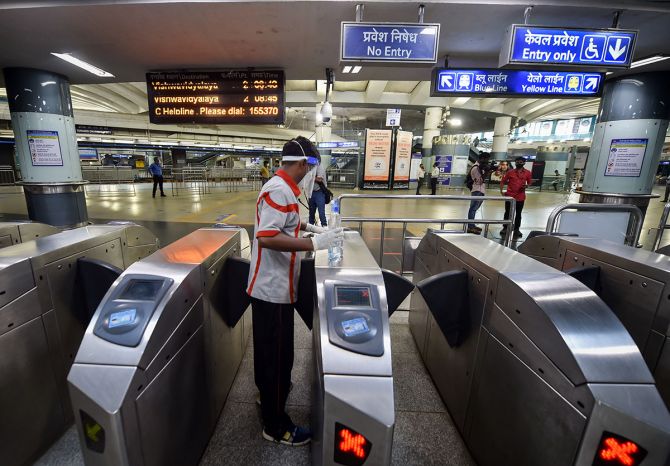 He was, however, optimistic that things would gradually improve in the coming days.

Services on the Metro Green Line from Yelachenahalli to Nagasandra will start from Wednesday.

From September 11 onwards, the trains will ply on both the lines from 7 am to 9 pm.

"The number of commuters allowed in each train is limited to 400 passengers to ensure social distancing norms," a BMRCL official said. 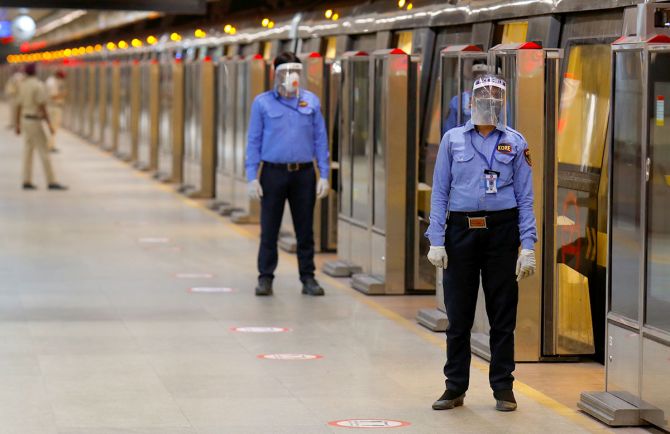 IMAGE: Security guards wearing face masks and shields stand on a Delhi metro train platform on the first day of the restart of their operations. Photograph: Adnan Abidi/Reuters

The Metro Rail also made it clear that all passengers will have to use smart cards as it will not sell tokens. No card recharge will be done at the stations.

Instead, the passengers will have to top up their cards using the BMRCL's mobile application.

In Hyderabad, metro train services between Corridor 1 (Miyapur to LB Nagar) started while operations will be resumed in a graded manner on other routes.

Ordinary people were facing a lot of problems in reaching their places of work or destination in the absence of public transport, Hyderabad Metro Rail Limited (HMRL) Managing Director NVS Reddy said. 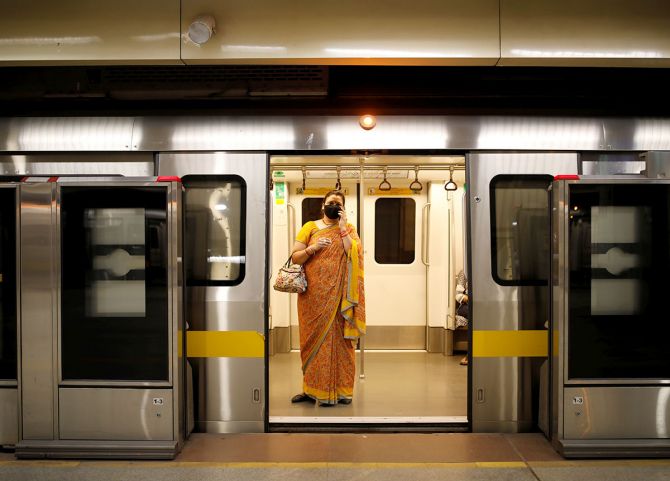 Services are being operated from 7 am to noon and 4 pm to 9 pm, he said.

Metro Rail here has made arrangements for the supply of masks on a payment basis to people arriving without a mask. 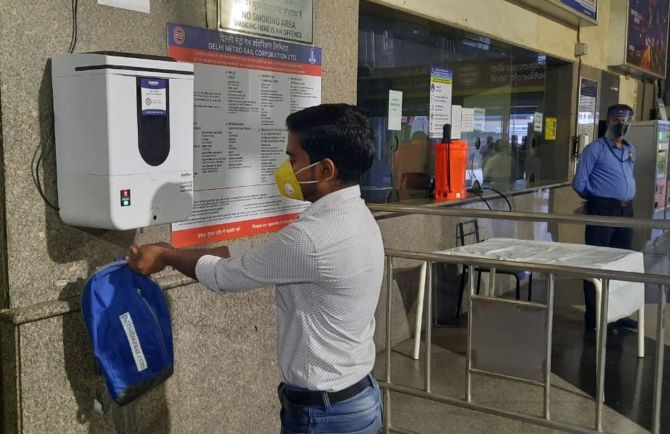 IMAGE: A commuter sanitises his hand at from a sanitiser dispensers. Photograph: @OfficialDMRC/Twitter

A Kochi Metro spokesman said trains will run from 7 am to 9 pm with a 10- minute breaks.

"There is no rush. The services are being carried out adhering to the restrictions to prevent the spread of coronavirus," a Kochi Metro official said.

Kolkata Metro, the country's first rapid transit system, is yet to resume service. A colour-coded e-pass system using a mobile phone has been developed by a technology solutions company for ensuring that a maximum of 400 passengers can board a Kolkata metro train.

The West Bengal government had written to the Railway Board seeking resumption of Metro and suburban train services in a limited manner maintaining the norms of physical distancing and health and hygiene protocols.

The Maharashtra government had on September 1 decided against the immediate resumption of metro and local train services.

No decision has been taken on restarting metro services in Jaipur, Rajasthan officials said. 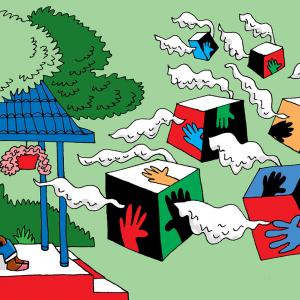