Parts of Kolkata and adjoining Howrah resembled a battle zone on Thursday as Bharatiya Janata Party workers and supporters clashed with police, hurling stones and blocking roads with burning tyres, to protest a string of killings of saffron party workers. 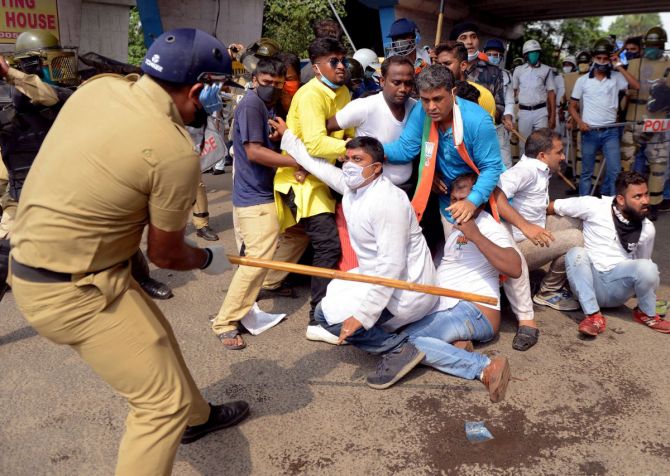 Clashes erupted at several places during the march called by Bhartiya Janata Yuva Morcha, the youth wing of the BJP, to Nabanna, the state secretariat, when they tore down barricades, officials said.

Police personnel in riot gear burst teargas shells, beat up agitators and used water cannons to break up the protests which are still raging in the two cities.

Several BJP activists, including some senior leaders, were injured.

It was still not known whether police personnel were also injured. 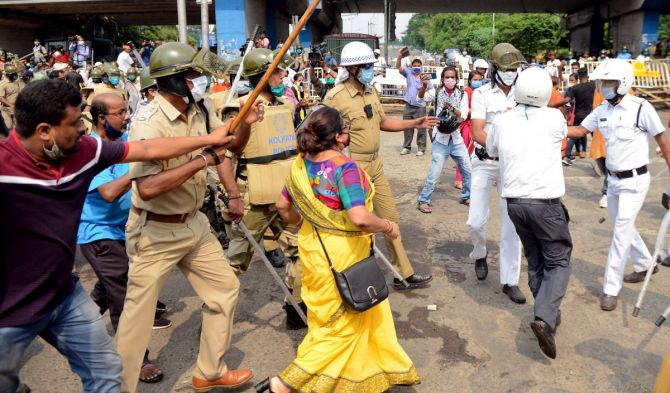 Thick plumes of smoke from discarded tyres that the protesters set on fire to block traffic blackened the sky and streets were littered with stones. Shops and other business establishments hurriedly downed their shutters during the skirmishes.

Thousands of slogan-shouting BJP workers from Kolkata and Howrah began marching towards Nabanna around 12.30 pm.

Parts of Howrah district witnessed much of the violence where BJYM national president and Bengaluru South MP Tejaswi Surya along with state president Soumitra Khan led a march from Howrah Maidan.

They were stopped at the Mallick Gate, prompting angry BJP supporters to attack police with stones. When the protesters tried to pull down the barricades, police burst teargas shells.

Failing to quell the rampaging crowds of BJP workers, personnel of Rapid Action Force baton-charged them, resulting in injuries to some of the protesters.

An unspecified number of agitators were detained.

Police claimed they recovered a loaded pistol from one of the protesters. It also alleged BJP workers lobbed crude bombs at police, an accusation rejected by the saffron party as false.

Police used teargas, water cannons and batons to break up the protest at Santragachi which was led by the party's state secretary Sayantan Basu.

During the clashes, Raju Banerjee and MP Jyotirmoy Singh Mahato were injured. Banerjee was shifted to a hospital. 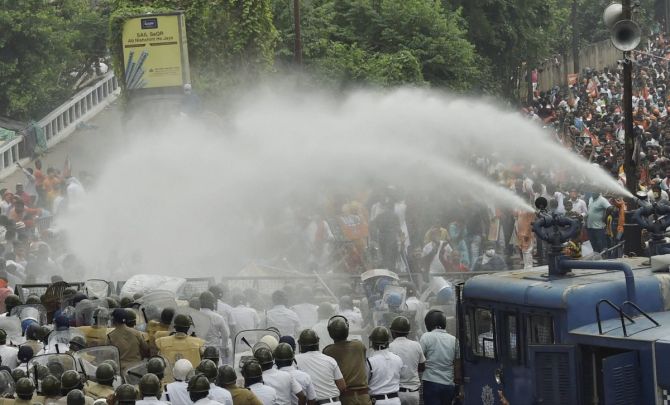 After BJP workers fought pitched battles with police, Vijayvargiya and Roy bagan a sit-in at the Hastings crossing.

"We were holding a peaceful march but police action turned it into a violent agitation. The police and Trinamool Congress goons attacked us. It's all happening because of the dictatorial attitude of Mamata Banerjee," Vijayvargiya told reporters. 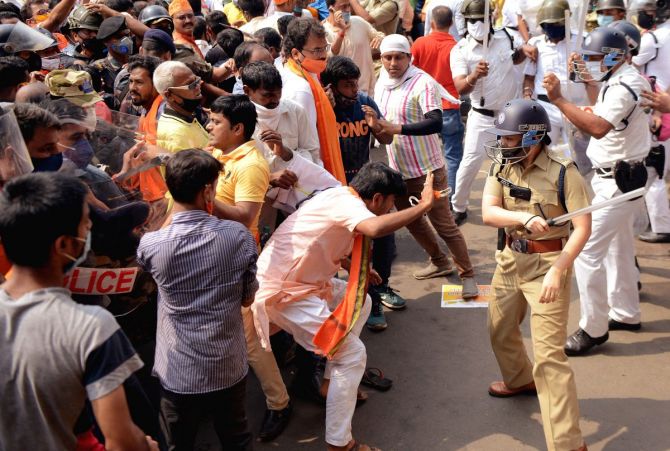 Similar chaotic scenes unfolded at the bustling Burrabazar in Kolkata where BJP state president Dilip Ghosh was leading the march. BJP national secretary Arvind Menon was injured during the scuffle.

Nearly 5,000 police and RAF personnel have been deployed in the disturbed areas.

West Bengal has seen a string of political killings in the last few months, including those of BJP workers. A local BJP leader Manish Shukla was killed at Titagarh in North 24 Parganas district a few days ago, triggering protests in several parts of the state. He was considered close to BJP strongman and Barrackpore MP Arjun Singh.

Shukla's killing was the immediate trigger for Thursday's protest which was called against the alleged worsening law and order situation.

The TMC government had on Wednesday declined permission for the protest march citing the Pandemic Act. It had also declared the state secretariat closed for two days from October 8 for "sanitisation". 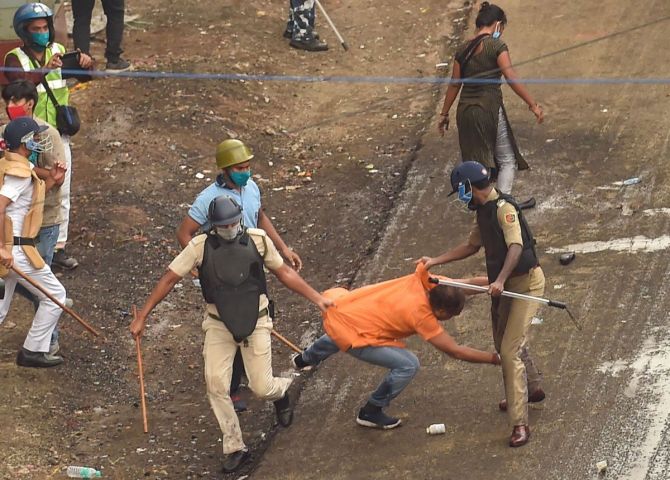 Bharatiya Janata Yuva Morcha national president Tejasvi Surya on Thursday came down heavily on the West Bengal government over the "brutal attack" on Bharatiya Janata Party activists, during their march to the state secretariat, and said it was a "black day as rule of law were murdered" in the state of West Bengal.

Surya, the BJP MP from Bengaluru South, also sought an inquiry by the Union home ministry into the blue chemical-laced water that was sprayed on party activists during the rally and termed it a "gross violation of human rights".

"Today was a black day... The TMC government murdered rule of law in the state. The way our cadres and leaders were attacked and beaten up mercilessly by the police is unprecedented. Don't we have the right to conduct a peaceful rally in the state?" he said during a press meet.

The parliamentarian further asserted that he would continue to visit Bengal and conduct democratic protests to ensure that the Trinamool Congress gets defeated in the next assembly polls. 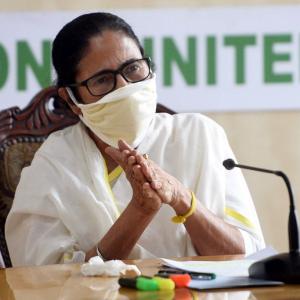 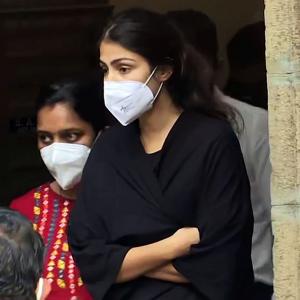