'The Shaheen Bagh model of bullets and biryani won’t work. The RSS looked at a template that would play to Bengali pride and harp on the state’s development. Mamata’s slogan to defeat the Left Front was 'Bengal awake and arise'. She promised to check the flight of capital from Bengal to far-flung states and usher in a renaissance. The RSS wants the BJP to pitch this line because it feels Mamata hasn’t delivered on her promises.' 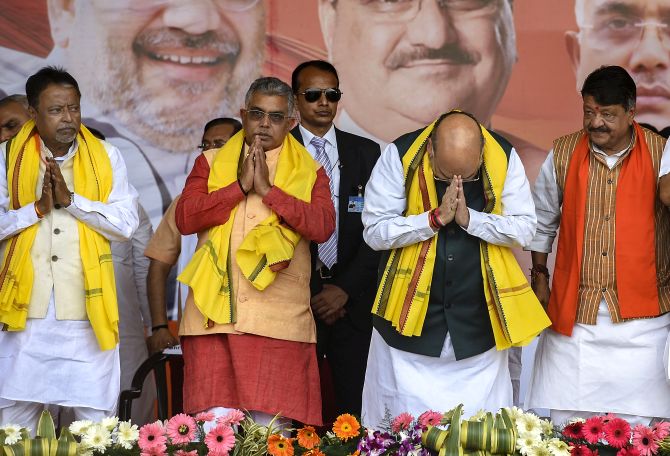 With a little over a year before West Bengal votes to elect its next government, the Bharatiya Janata Party is in the throes of a debate framed on three aspects: Core ideology contra governance, national issues as opposed to regional/local matters, and whether to project a chief ministerial candidate.

These deliberations assumed significance after the BJP's debacle in the Delhi assembly polls.

The rout was ascribed by some national strategists and thinkers, also involved with West Bengal, to the lack of an optimum blend between ideology and credible governance agenda, the need for local units to be alive and kicking on the streets, and the absence of a CM face.

While a dominant section of the BJP's West Bengal unit, swayed by its state president Dilip Ghosh, a former Rashtriya Swayamsevak Sangh 'pracharak', demanded to accord precedence to ideology over governance, Delhi influencers advocated giving equal priority to “positive governance” without undermining the centrality of the citizenship package in the discourse.

Detailing the thread running through the ongoing discussions, a source said: “As far as the CAA (Citizenship Amendment Act) is concerned, it is a local issue in West Bengal and not an abstruse ideological intervention. The larger issue, which I feel is relevant, is that when you’re trying to upstage a sitting government, you have to go a little beyond negativism, into positive governance.”

The source cited the examples of Narendra Modi’s campaigns in the run-up to the 2007 and the 2012 Gujarat elections, which he led as chief minister.

“In both cases, the last phases were marked by vitriol but the main reason for Modi’s victories was he could sell his ideas and a good record of governance.”

Adducing a comparable argument for West Bengal, the source said: “The BJP has done Mamata Banerjee’s (the chief minister) critique up to a point. Her law and order management or the lack of it, her partiality towards Muslims, and so on. But where are the attacks on health and education? A well-rounded poll campaign must take into account these sectors.”

“The BJP is a national party, so naturally national issues will be punched together with local ones. We have to think of what alternative model we will offer if we come to power.” Ghosh, the Medinipur MP who is regarded as an inflexible ideologue, indicated he could be pragmatic when it came to fighting a poll.

He said: “The BJP rests on an ideology that inspires and motivates our workers. But we also need different strategies, one for winning an election and the other for governance.”

However, a West Bengal BJP watcher emphasised that in advocating Hindutva and nationalism, the party's approach would have to be nuanced.

“The Shaheen Bagh model of bullets and biryani won’t work. The RSS looked at a template that would play to Bengali pride and harp on the state’s development. Mamata’s slogan to defeat the Left Front was Bengal awake and arise. She promised to check the flight of capital from Bengal to far-flung states and usher in a renaissance. The RSS wants the BJP to pitch this line because it feels Mamata hasn’t delivered on her promises."

But another school of thought roots for the eye-for-an-eye attitude.

Bengal is politically violent, the Trinamool Congress’s goons have attacked and killed BJP cadre. So many in the local BJP unit believe Gandhigiri is not the answer. The language and reprisals will have to be "equally aggressive,” they said.

The problem is the BJP’s “bhadralok (the urban elite)”, small as the following is but nonetheless persuasive, squirmed at the brutish brand of politics.

In the 2019 elections, the BJP won its 18 (of 42) parliamentary seats in the rural and quasi rural belt, but could not penetrate the city swath.

A state leader said: “We have not been able to communicate with the thinking Bengali Hindu. The BJP has the image of a Hindi bhashi (speaking) party. Some leaders speak Bangla with a Hindi accent as though they are probashi (expats). Bengalis are sensitive about these things.”

Chandra Kumar Bose, the grandnephew of Subhas Chandra Bose, said: “The BJP should talk of governance and corruption instead of Ram temple and the abrogation of Article 370.”

Bose, who in 2019 lost the South Calcutta seat to the Trinamool Congress by a big margin, pushed for a CAA “without the religious tag”.

“If you’re following Mahatma Gandhi, remember he said all persecuted persons from the neighbouring country (then East and West Pakistan) should be considered for citizenship,” Bose said.

As for projecting a CM candidate, opinions were just as partite.

“When you’re taking on a powerful person like Mamata, it will help to have a prominent face like Uma Bharti, who was pitted against Digvijaya Singh (in Madhya Pradesh in 2003), or Vasundhara Raje, who took on Ashok Gehlot (in Rajasthan). It’s a question of who’s the best,” he said.

Ghosh rejected the idea, saying: “It’s a national policy that wherever we are fighting to win, there will be no CM nominee.” 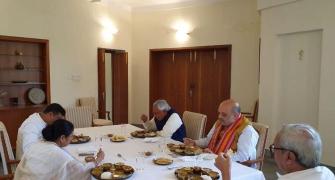