Flood-hit Nepal has appealed to the international agencies for help to prevent the possible water-borne diseases and to ensure proper health services to the tens of thousand of people affected by the incessant rains that has claimed at least 67 lives, according to media reports. 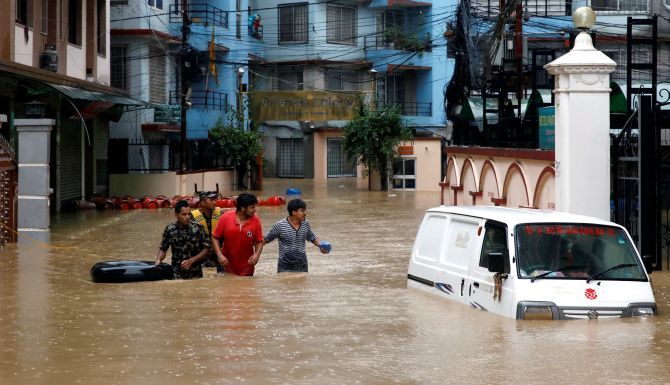 Nepal has been hit by heavy rainfall since Thursday. More than 25 districts and 10,385 households have been affected.

32 people are reported to be missing in the rain-related incidents that have thrown normal life out of gear in central and eastern parts of the country. 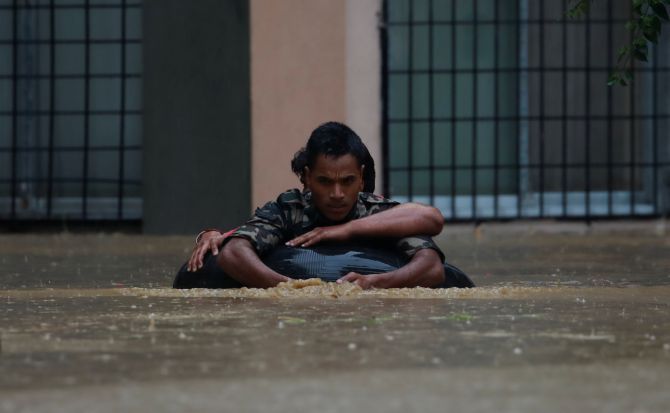 Many parts of Kathmandu, including Kalanki, Kupondole, Kuleshwor and Balkhu were submerged under water on Friday.

Those killed include three from Kathmandu, six from Makawanpur, five each from Lalitpur, Rautahat and Bhojpur, four each from Dhanusha, Khotang and Kavre districts, authorities said.

Similarly, three each from Khotang, Dhanusha, Kavre, two each killed from Jhapa, Udaypur, Bara, Parsa, Mohattari, Dhading and Dolpa, and one each killed from Ilam, Panchthar, Morang, Sunsari, Ramechhap, Chitawan, Palpa and Dang, they added. 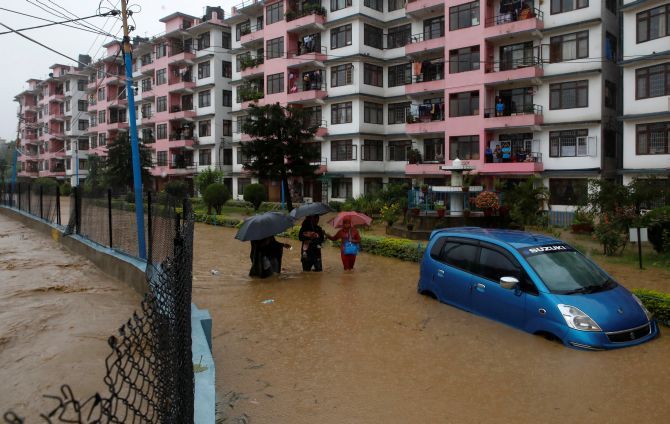 Nepal Police said they have rescued 1,445 stranded people from different parts of the country, including Kathmandu, Lalitpur, Dhading, Rautahat, Chitawan and Siraha.

An emergency meeting was called on Sunday to take stock of the damage caused by the rains. 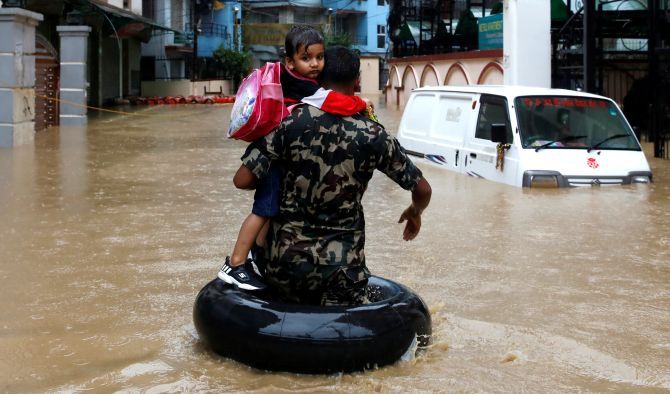 The Health Emergency Operation Centre, set up by the Ministry of Health and Population, has asked international partner agencies to help and mobilise their mechanisms in the districts hit by flood and landslide.

During the meeting at the health ministry on Sunday, the centre informed representatives of the agencies about the possible risk of disease outbreaks in the districts. 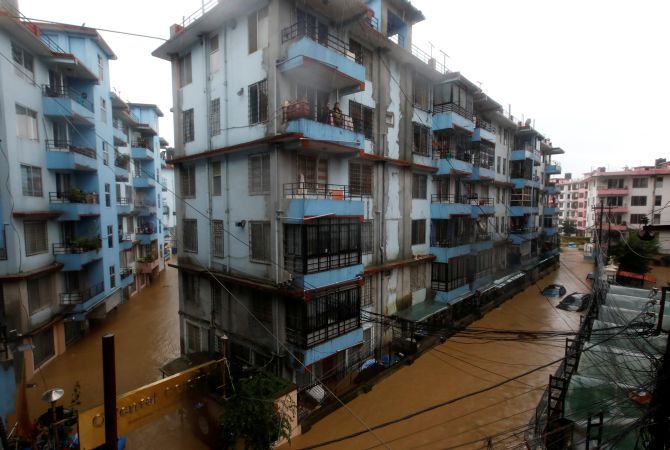 "We have also requested them to mobilise their local channels in the areas of need. All our international partner agencies are ready to provide all kinds of help," Chudamani Bhandari, chief of the centre, told the Post.

The health ministry has also directed all the central-level hospitals and medical colleges to prepare emergency teams of doctors to be mobilised in the disaster-hit areas, Bhandari said. 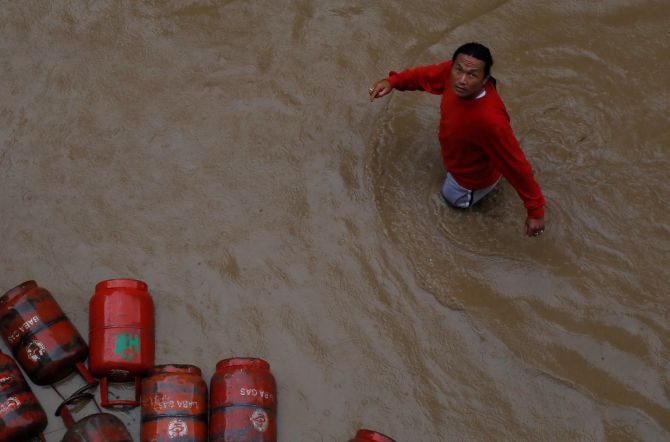 Three teams of doctors from the Health Ministry would be deployed on Monday to Pathlaiya of Bara district, Lahan of Siraha district and Bardibas of Mahottari district of Province 2, one of the provinces worst hit by the floods, he said.

Those teams would coordinate with the provincial and local governments to ensure health services to the needy people.

Health experts have warned of possible outbreaks of waterborne diseases -- diarrhoea, dysentery, typhoid, Hepatitis A, Hepatitis E in the flood-hit areas of the Tarai region, as most of the water resources have been contaminated by floodwaters, the report said. 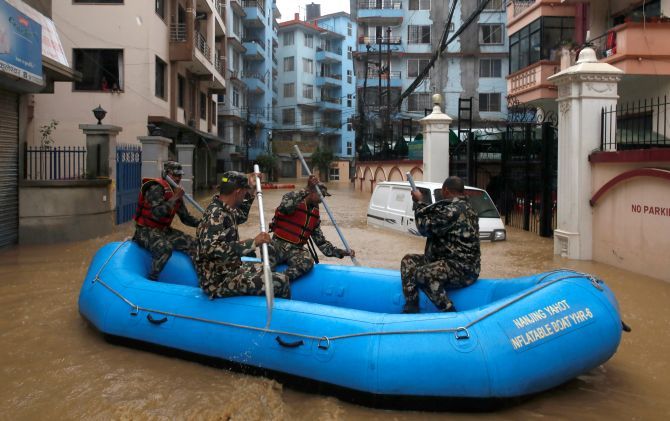 "Cases of malaria, dengue, kalajar could go up and people in the affected areas are vulnerable to snake bites as well," said Dr Sameer Kumar Adhikari, an official at the Epidemiology and Disease Control Division.

The division has also urged all provincial governments to not allow health workers to take leave during the monsoon, which is considered an epidemic season. 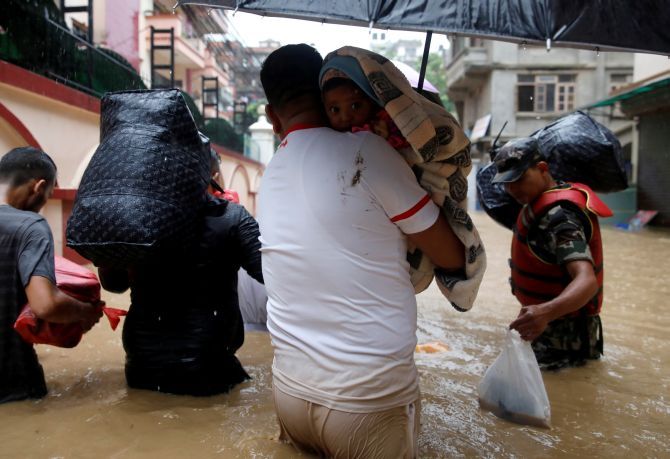 Provinces 1, 2 and 3 are the worst hit, with Lalitpur, Bhojpur and Rautahat witnessing the highest death toll, The Himalayan Times reported.

Provincial governments have decided to provide relief for flood and landslide victims. They will also provide free medical treatment to the 38 people who have been injured so far.

According to the Flood Forecasting Section on Sunday, water level in the major rivers is coming down. 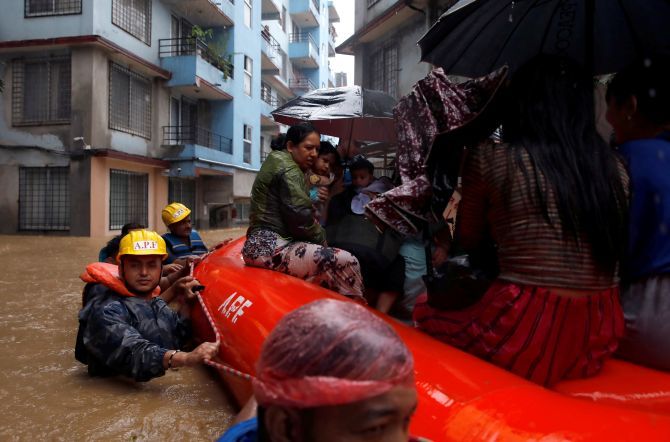 The section, however, has warned people to remain alert, as risk of landslides has increased due to continuous rainfall for the last four days, it said.

The Meteorological Forecasting Division (MFD) warned the public to remain on high alert and said that air and road traffic could be affected due to low visibility.
Heavy rainfall has led the water level in the rivers to rise.

Shirish B Pradhan
Source: PTI© Copyright 2023 PTI. All rights reserved. Republication or redistribution of PTI content, including by framing or similar means, is expressly prohibited without the prior written consent.
Print this article