Ready for ops on both fronts, say IAF pilots near PoK-China border

At a time when it is suspected that both China and Pakistan may come together against India, the Indian Air Force on Friday said it was ready for undertaking operations simultaneously on both the fronts. 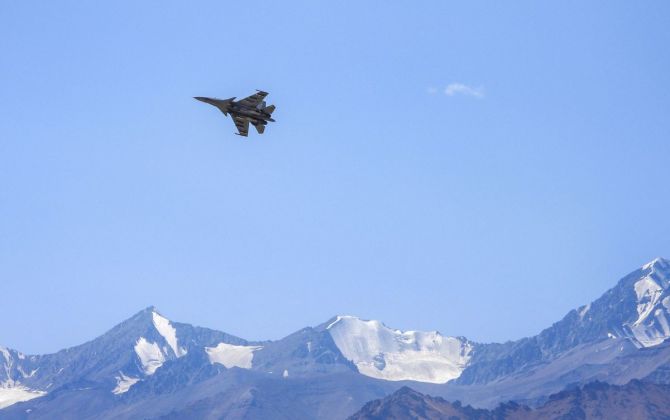 The forward airbase near the PoK-China border, which from where Pakistan is around 50 kilometres and the strategic Daulat Beg Oldi is around 80 kilometres, the activity of fighter, transport aircraft and helicopters is going on during both day and night.

Team ANI reached the strategically located airbase moving through the Khardungla pass along the Shyok river to witness the operations of fighter aircraft including the Su-30MKI and the transport planes including the C-130J Super Hercules, Ilyushin-76 and the Anton-32.

In view of the ongoing conflict with China, the fighter aircraft are operating during both day and night, the transport aircraft are continuously flying in and out of the airbase with troops, rations and ammunition to the troops located in bases on the Line of Actual Control in DBO and other areas in Eastern Ladakh.

Asked about the threat from Pakistan's Skardu airbase and the possibility of China-Pakistan coming together there, an Indian Air Force pilot of Flight Lieutenant-rank said, "Owing to the modern platform, the IAF is fully trained and is ready to undertake any operations on both the fronts.

"We are fully trained and highly motivated. We live by the IAF's motto --Touch the Sky with Glory."

Speaking about the IAF's capability to undertake night operations in these tough terrains, a fighter pilot said, "Today, our warfare capabilities have grown, so much so that we are able to undertake all types of missions even at nights from the forward base."

Earlier, the Pakistani airbases in occupied Kashmir came under watch after a Chinese refueller aircraft landed in Skardu, Gilgit-Baltistan region, in June.

The strategic airbase located on the banks of the Shyok river has been upgraded for day and night operations.

The Galwan river, which saw a violent face-off between India and China and the death of several soldiers from both sides, also merges into the Shyok River which flows from Eastern Ladakh to Western Ladakh before crossing over into Pakistan.