Paswan's daughter, son-in-law not allowed to receive his body, protest

Former Union minister Ramvilas Paswan's daughter from his first wife and her husband staged a protest at Patna Airport on Friday after they were not allowed entry inside to receive the body of the departed leader. Paswan's daughter Asha Devi and her husband Anil Sadhu protested in front of the car of Deputy Chief Minister Sushil Kumar Modi when he had come to receive the body of the Lok Janshakti Party founder.

"Why politics is being played on such a sad occasion? Why his daughter and family members are not allowed entry inside the airport?" Paswan's son-in-law told reporters.

Asha Devi also fumed at the district administration for preventing her from going inside the airport.

Chief Minister Nitish Kumar has also come to the airport to receive the body of the veteran leader.

Officials said that only selected people are permitted to go inside the airport in view of security considerations.

Asha Devi is the daughter of Paswan from his first wife Raj Kumari Devi, who still lives in their native Saharbanni village in Khagaria district of Bihar.

Besides Asha Devi, Usha Devi is another daughter of the departed leader from his first wife.

In 2014, he disclosed that he had divorced her in 1981, after his Lok Sabha nomination papers were challenged.

In 1983, he had married Reena Sharma, an air hostess and a Punjabi Hindu from Amritsar. They have a son and a daughter. His son Chirag Paswan is heading the LJP at present.

From the Jay Prakash Narayan Airport, his body will be taken to the Bihar Legislative Assembly premises where legislators and others will pay respect to him.

From there, his mortal remains will be taken to the LJP headquarters in the state capital where it will be kept in the night, party sources said.

He will be cremated on the bank of the river Ganga at Digha ghat with full state honours on Saturday.

Ram Vilas Paswan was born to Late Shri Jamun Paswan and Late Siya Devi in a Dalit family in Shaharbanni village on July 5, 1946.

Paswan, who held a Bachelor of Laws and a Master of Arts degrees, started his innings in electoral politics with a win from Alauli Assembly seat in 1969 on Samyukta Socialist Party ticket.

The leader had hit the national headlines after winning the 1977 Lok Sabha election from Hajipur seat with a record margin of votes on Janata Party ticket.

Since then, he represented Hajipur seat for eight times. 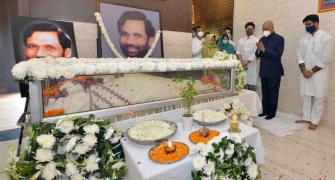