The Delimitation Commission, mandated to redraw the assembly constituencies of Jammu and Kashmir, is set to submit its report to the government next week, sources said on Thursday. The panel would also make public its "award" detailing the number of constituencies and their size by bringing out a gazette notification after the report is submitted to the government, the sources said.

While the report will be a much detailed document, the award will deal with basic details such as number of constituencies and their size, they pointed out.

The commission has proposed increasing the number of seats in the Union territory from 83 to 90. Besides, there are 24 seats in Pakistan Occupied Kashmir which continue to remain vacant.

For the first time, nine seats have been proposed for Scheduled Tribes.

The panel has also proposed six additional seats for Jammu and one for Kashmir. As of now, the Kashmir division has 46 seats and Jammu division 37.

The last delimitation panel took seven years to give its award in 1995 while this commission took a little over two years to complete its task despite the coronavirus pandemic, a functionary pointed out.

Formed in March 2020, the panel was granted a one-year extension last year.

Headed by former Supreme Court judge Ranjana Prakash Desai, it has Chief Election Commissioner Sushil Chandra and the state election commissioner of Jammu and Kashmir as its ex-officio members.

In February, it was given a two-month extension to complete its task. Its term was to otherwise end on March 6. 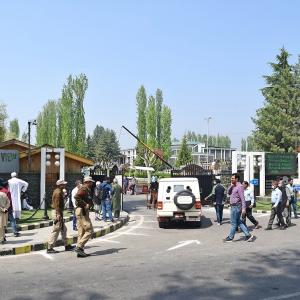