'Did we ask anybody's religion or caste when our government gave LPG cylinders to eight crore families? We never asked people's religion when giving homes to the poor during the last five years.'
'I want to ask from the Congress, its allies and others who are dividing the country over the issue as to why they are resorting to such lies.... They have conspired to push not only Delhi but also other parts of the country into chaos and fear'. 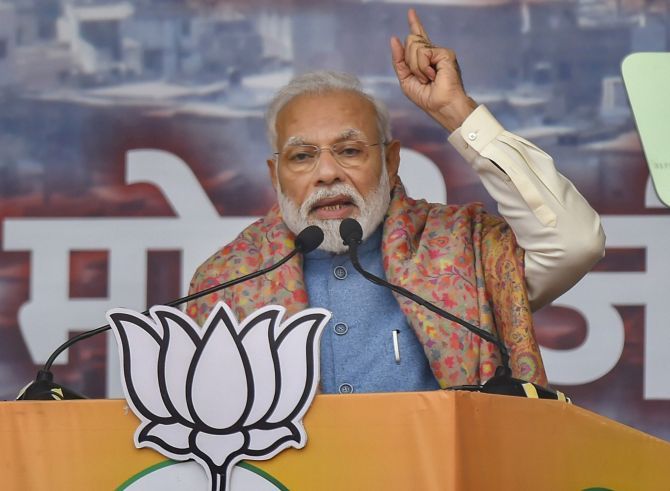 Accusing the Opposition of pursuing 'divide and rule politics' and stoking violence over the amended citizenship law, Prime Minister Narendra Modi asserted on Sunday that the legislation and the National Register of Citizens have nothing to do with Indian Muslims as he sought to assuage their concerns amid widespread protests.

Strongly defending the contentious law, he said at a rally in New Delhi that it is about giving rights to persecuted minorities from neighbouring countries and does not snatch anybody's rights, as he made an appeal for peace.

"The citizenship law or the NRC has nothing to do with Indian Muslims. They have nothing to worry," he said, accusing the Congress, its allies and 'Urban Naxals' of spreading rumour that Muslims will be sent to detention centres.

The law has, in fact, nothing to do with Indian citizens, he said and asked people to stand up to pay tribute to Parliament and lawmakers for its passage.

Modi used the big rally, held to 'thank him' for the Centre's decision to give ownership rights to residents of unauthorised colonies in poll-bound Delhi, to counter criticism over the Citizenship Amendment Act as he condemned incidents of violence during the protests, lauded the police and slammed Pakistan for discrimination against minorities.

In a relentless attack on the opposition during his nearly 100-minute speech, he said it was still reeling from the shock of his return to power in June and is resorting to divide and rule politics to target him. 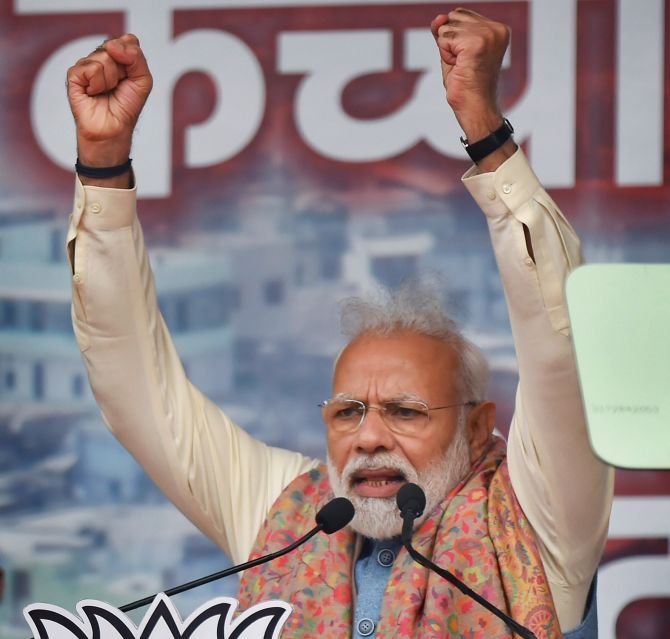 He cited his development schemes like giving LPG cylinders to the poor and health insurance scheme to assert that it has never mattered to his government whether people go to temple or mosque.

"The citizenship law or the NRC have nothing to do with Indian Muslims. They have nothing to worry," he said, accusing the Congress, its allies and 'Urban Naxals' of spreading the rumour that Muslims will be sent to detention centres.

The citizenship law, he added, has in fact nothing to do Indian citizens.

In a clear justification of having a nationwide National Register of Citizens, he said infiltrators never 'reveal' themselves unlike refugees who never 'hide' their identities.

He dared his rivals to find anything discriminatory in his work and alleged that they have resorted to dividing the country through their 'vote bank politics, lies and rumours' after being unable to challenge him politically. 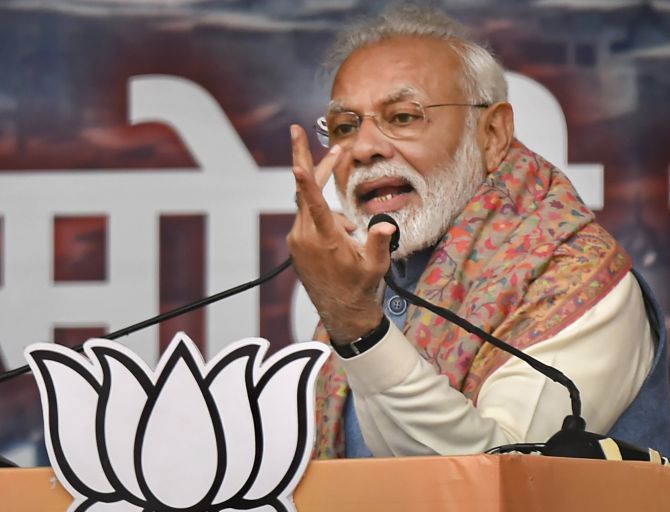 Targeting the Congress, the Aam Aadmi Party, the Trinamool Congress and the Left, he said India had an opportunity to expose Pakistan's discrimination against minorities but it was lost due to their politics and accused these parties of working to 'defame' India globally.

Starting his speech with the slogan of 'vividhta me ekta, Bharat ki visheshta (Unity in diversity is India's speciality)', he said his government never considered whether beneficiaries of its schemes went to temple or mosque.

He asked Muslims to look at his 'track record' and not listen to 'tape record' of his rivals.

"Did we ask anybody's religion or caste when our government gave LPG cylinders to eight crore families? We never asked people's religion when giving homes to the poor during the last five years.

"I want to ask from the Congress, its allies and others who are dividing the country over the issue as to why they are resorting to such lies.... They have conspired to push not only Delhi but also other parts of the country into chaos and fear," he said, asking youths to read the law's provisions.

He also hit out at the chief ministers who have claimed that they will not implement the amended citizenship law in their states, saying they should have first consulted their legal officers. 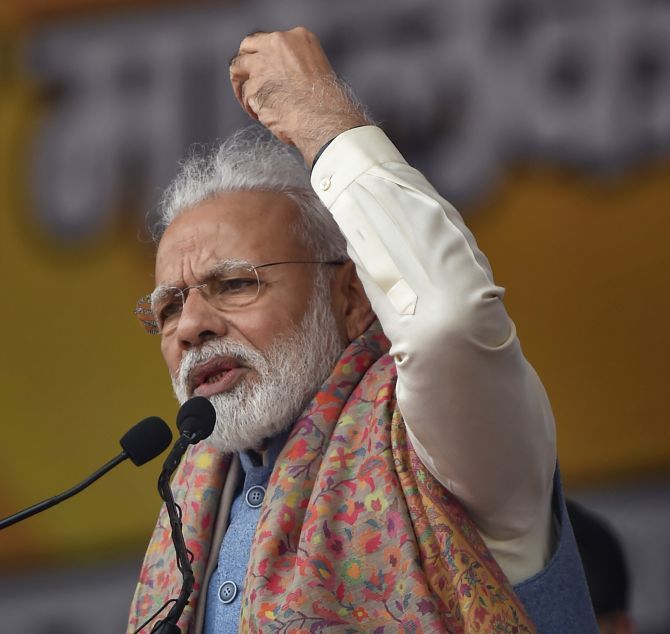 The central government has maintained that the Constitution makes it binding on states to implement the law passed by Parliament.

In a clear justification of having a nationwide National Register of Citizens, Modi said infiltrators never 'reveal' themselves unlike refugees who never 'hide' their identities.

Modi, however, made it clear that the contentious issue has not been discussed by his government in either Cabinet or Parliament, and noted that it has been carried out only in Assam so far following the apex court's order.

The prime minister said lies were being spread about the NRC.

Speaking against violence during the recent anti-CAA protests, he accused the opposition of not making any appeal for peace and said their 'silence' showed their indirect support to vandalism targeting school buses and trains.

Praising the police, which has faced criticism from some quarters for allegedly using excessive force against protestors, the prime minister said they have always helped people and noted that over 33,000 of them have sacrificed their lives in duty since independence. 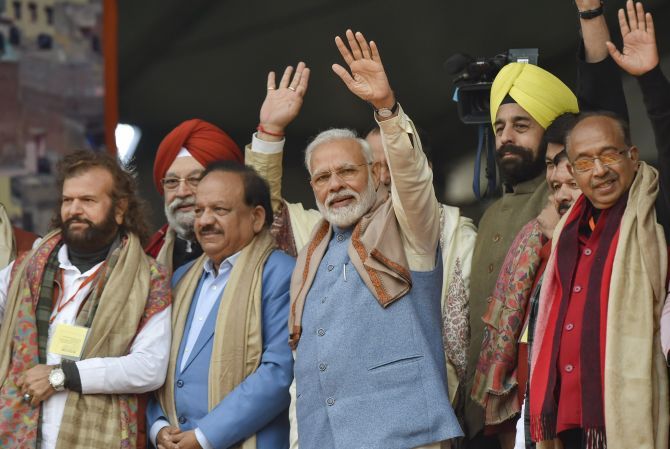 Police did not rescue people from Anaj Mandi fire by asking their religion, he said.

Several protesters in states like Uttar Pradesh, Karnataka and Assam have died in alleged police firing.

Modi said his rivals can burn his effigy and thrash it with shoes if they wish so, but they should not target the assets of the poor.

He also quoted comments of former prime minister Manmohan Singh and Rajasthan Chief Minister Ashok Gehlot in support of giving citizenship rights to these persecuted minorities and said the Congress changed its stand due to vote bank politics.

Quoting Mahatma Gandhi as saying that India should give shelter to persecuted Hindus and Sikhs from Pakistan, the prime minister said the law is in line with his sentiments .

Those who try to benefit from 'Gandhi' surname should read what he had said, Modi said in a clear dig at the ruling family of the Congress.

Opposition parties do not want to distinguish between infiltrators and those who took refuge in India due to persecution, he said.

Modi spoke about the 'support' he had received from Muslim countries and the highest civilian honour bestowed on him by many of them to assert that it has 'scared' the Congress and its friends. 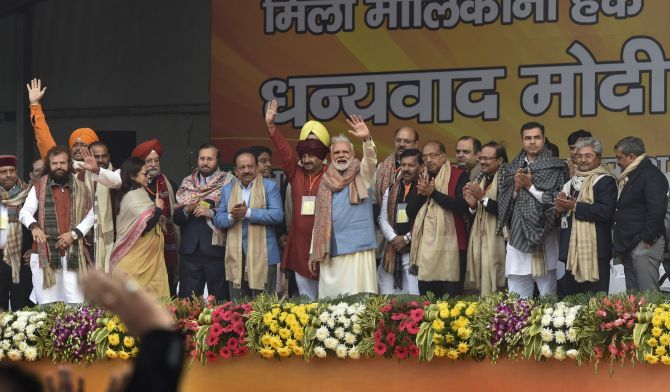 "They are worried if Muslims across the world support me so much, then how long they can frighten Indian Muslims (against me)," he said.

India's relations with Bangladesh had deepened under his government, Modi said.

The Bangladesh foreign minister had recently cancelled a visit to India, citing his busy schedule.

Modi said everything is being done to remove him by his rivals, adding that efforts have been made for over 20 years to target him but these never succeeded.

He said most beneficiaries of the amended law were Dalits and took a jibe at Dalit leader Chandra Shekhar Aazad over his participation in a protest rally in the old Delhi. Aazad was later arrested.

Referring to the protests, Modi said he was pained when he saw stones in hands of protesters but was also comforted when he saw some of them holding the tricolour.

"Now that they are carrying the tricolour, they will also speak against those carrying guns or speaking in support of Pakistan-sponsored terrorism," he said. 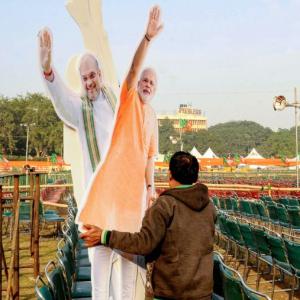