'How does relief in the form of citizenship to a persecuted Hindu in Bangladesh put the citizenship of an Indian Muslim in danger?', asks Dr Sudhir Bisht. 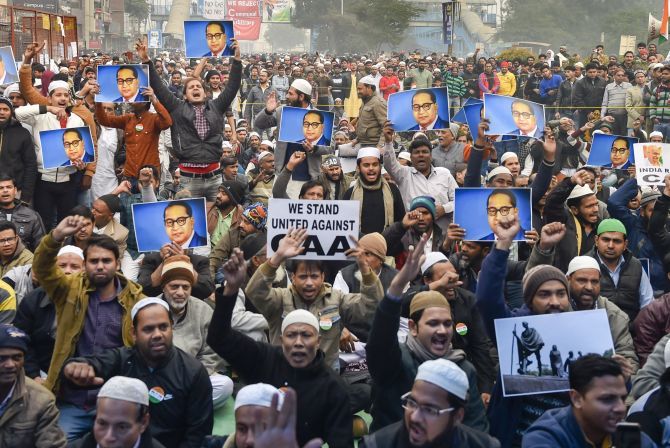 India is separated by Turkey by nearly 4,500 kilometres.

If someone in 1919 were to get on horseback or in a jeep in New Delhi, he would have needed to pass through almost the entire length of Iran before entering Turkey.

In 1914, present-day Pakistan was an integral part of Hindustan, hence I am stating that to reach Turkey from India one only had to pass through Iran.

And if one were to board a ship at the port of Bombay, he would have needed to sail over the Arabian Sea, the Gulf of Aden, the Red Sea, the Suez Canal, the river Nile, the Mediterranean Sea and at least nine more seas/canals/rivers before reaching the port of Istanbul in Turkey.

The moot point I am making here that India in 1919 had very little to do with Turkey in 1919. There was almost zero people-to-people contact between the people of India and the people of Turkey.

The latter was part of the Ottoman empire that was led by a caliph.

The Ottoman empire had fought alongside the central powers (Germany, Austria-Hungary, Bulgaria) in World War I and were comprehensively defeated by the Allied forces (comprising mainly Britain, France, Russia, Japan and Italy and a few associates like the USA).

The defeat led to the decline of the caliphs and the Ottoman empire territory began to get diminished. A treaty was signed in 1920 that would eventually lead to the creation of independent nations like Turkey, Palestine, Syria, Lebanon etc.

The events in faraway Turkey should not have been a cause for unrest among the people of India, but a man named Maulana Muhammad Ali Johar created a movement against the British for trying to cripple the caliphate in Turkey.

The Khilafat movement, involving Muslims against the British empire's activities in Turkey, was launched in Lucknow in 1919. Thousands of Muslims joined the stir.

The movement was so powerful that Gandhiji saw an opportunity to create a coalition with it. He supported the movement and the Khilafat leaders promised to support Gandhiji's struggle for Swaraj.

If the Muslims led by Ali Johar and his Muslim followers all over India had joined Gandhiji's movement against the British because the Muslims in India were an equal stakeholder in the aspiration of a liberated India, I would have no qualms with that.

But the fact is that Muslims under Muhammad Ali Johar joined hands with Swaraj as a quid pro quo.

That Hindus and Muslims fought for independence in equal measure is never in doubt, but the Khilafat movement stands out in one sense.

That the Muslims of India in 1919 felt violated when the caliphate was pulled down in faraway Turkey is astounding to say the least.

It builds an image of parochialism based upon religion instead of unity based upon nationalism and patriotism.

It is this sense of Khilafat that is seeing a huge turnout of Muslim men and women in Old Delhi and in Lucknow and in Aligarh against the Citizens Amendment Act 2020.

Firstly, the government erred, and very badly at that, in explicitly mentioning Hindus, Sikhs, Jains, Buddhists, Christians and Zoroastrianism as minorities living in Pakistan, Bangladesh and Afghanistan, that India wanted to help by giving them citizenship if there exists a case of their being persecuted in their respective homelands.

The Act should have just mentioned 'religious minorities' in the three countries named in the Act.

By way of excluding Muslims conspicuously, the Act has forced the community to feel that they belong to a religion that India doesn't want to be associated with.

This is, of course, not true.

India's largest religious majority, the Hindus, accept Muslims as their own kith and kin.

If Hindus were unloving of Muslims, then they wouldn't idolise Muslim ghazal singers, hockey players, cricketers and Presidents who have ruled the hearts of Hindus.

But Muslims suffer from this persecution complex and the government should have anticipated that it could lead to an eruption.

The Muslims as it is think that the Hindu nationalist party has annulled their triple talaq right and is also threatening to enforce a uniform civil code across the country.

It is perhaps not unnatural that Muslims felt they are deliberately at the receiving end of shame and humiliation.

The Act could thus have been a bit less direct and a lot more discreet.

Secondly, the Muslim community in India has nothing to lose if the Muslims of three neighbouring countries aren't given any chance to be treated as persecuted community.

History tells us that a minuscule group of Muslims is able to hijack the entire community by aligning itself with any Muslim cause that may have little bearing on India.

The Khilafat movement was one such unnecessary event.

The moot question that the agitating Muslims must ask themselves is this: How long will the community allow itself to be used as a pawn in the hands of political forces that have led it to greater depths of poverty and depression since 1947?

How does relief in the form of citizenship to a persecuted Hindu in Bangladesh put the citizenship of an Indian Muslim in danger? Muslims aren't persecuted in Pakistan, Bangladesh and Afghanistan on religious grounds.

And that is the reason why they don't find a mention in the CAA.

The leaders of Muslims in India have spread the canard that the CAA will deny rights to Indian Muslims.

This is far from the truth.

The CAA seeks to provide succor to persecuted minorities in three Muslim-majority countries.

It doesn't aim at heaping insult at Indian Muslims.

What will the government gain by insulting its own citizens? Only ignominy, infamy and ill-will.

I quote from The Times of India, 'There is a perception that has gathered steam that the CAA will deny rights to Indian Muslims. The truth is that the Act can't do so even if anyone tries to.'

'This perception is due to the connection made between the CAA and proposed nationwide NRC (National Register of Citizens).'

'While the CAA will make it easier for the non-Muslim immigrants from India's three Muslim- majority neighbours -- Pakistan, Bangladesh and Afghanistan -- to become citizens of India, it cannot take away citizens of Indian Muslims.'

'Even a pan-India NRC can only detect illegal immigrants and detain them, who can be from any faith.'

'Moreover the nationwide NRC is still at a proposal stage./

I call upon all agitating Muslims and those non-Muslims to stop the anti-CAA agitation.

The Act has earned its legitimacy because it has been passed in the Lok Sabha and Rajya Sabha.

Our elected representatives passed the Citizen Amendment Bill after much discussions, debates and deliberations.

The matter is now in the Supreme Court and those who are against the Act should fight it out in the highest temple of justice.

Dr Sudhir Bisht, author and columnist, is a frequent contributor to Rediff.com.