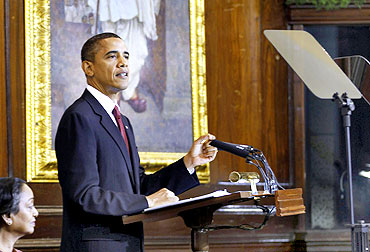 He gave an outstanding speech to Parliament on Monday. His address to lawmakers and the people of India was balanced and profound.

He moved hearts when he said, "My confidence in our shared future is grounded in my respect for India's treasured past -- a civilisation that has been shaping the world for thousands of years. Indians unlocked the intricacies of the human body and the vastness of our universe. And it is no exaggeration to say that our information age is rooted in Indian innovations -- including the number zero."

A truly touching moment was when he said, "And I am mindful that I might not be standing before you today, as President of the United States had it not been for Gandhi and the message he shared with America and the world."

All right, this was not Obama's best delivery or speech, but this was surely a very important and historic speech.

For a moment let us forget diplomacy and politics and the issues bugging our lives. His tribute to Gandhiji should make every Indian proud. That was the Obama moment that deserves an Indian salute.

After all, which other Indian makes us more proud than Gandhiji in the 20th century?

Obama also told Indians that Gandhiji is relevant in the 21st century where a guest comes and bows to his values.

His speech had enough political stuff, too.

It seems the students whom he listened to in a Mumbai college influenced him. He came forward, as a friend of India, to respond to young people's emotions. He gave evidence that he understands India's hurt due to the 26/11 terror attacks.

"We will continue to insist to Pakistan's leaders that terrorist safe havens within their borders are unacceptable, and that the terrorists behind the Mumbai attacks be brought to justice," he said. "We must also recognise that all of us have an interest in both an Afghanistan and a Pakistan that are stable, prosperous and democratic -- and none more so than India."

B Raman, the well-known terrorism expert, says, "I think his speech was very positive. He has taken note of the disappointment created after his comments in Mumbai. He has sought to correct the impression that he is not sensitive to India's concerns."

Obama said in his speech, "Indeed, a just and sustainable international order that America seeks includes a United Nations that is efficient, effective, credible and legitimate. That is why I can say today -- in the years ahead, I look forward to a reformed UN Security Council that includes India as a permanent member."

That means that now amongst the five permanent members of the UN Security Council, only China has not been supportive of India's bid.

Kanwal Sibal, the former foreign secretary, thinks Obama's support for India's a Security Council seat is a highly qualified one. When he says he is 'looking forward to,' it means that only in the years ahead will the US extend its support. It also means that in the short or medium term it won't happen.

But a diplomat, well-versed with UN matters, says amongst the G-4 countries (Japan, India, Brazil and Germany) in the running for a seat in the Security Council, India got a kick-start by the US today. Japan has got US backing but after the Iraq war, Germany has differences with the US over the issue.

Also, if Obama's words are compared with President George W Bush's words on the issue, one would like to draw the conclusion that the matter has moved a little forward.

On March 2, 2006, I had asked President Bush in New Delhi why the oldest democracy is reluctant to allow the largest democracy a permanent seat in the Security Council.

"So our position is to make sure that reform overall move forward -- as we think that is the best way to reform the Security Council. The United Nations is a very important international body and it is one that does require better accountability, and accountability on how we spend money, accountability on getting results."

"You know one such area as an example is the Human Rights Commission. That needs to be reformed in a way that actually is able to achieve significant results on behalf of the world. So we are open minded and we are listening, but what we don't want to do is to have a Security Council reform measure that causes the other reforms not to go forward."

Of course, Obama, if he really wished, could have said it with much more vigour, but on this India visit, he has not deviated from the script even once. America's agenda in a new global world order and its national interest in Af-Pak allows its President this much and nothing more.

Obama indirectly hinted how and when America can give wholehearted support to India.

If India speaks in one voice with America on issues like Iran's nuclear ambitions and Myanmar's undemocratic regime then America's desired support would come India's way. His comments on Iran and Myanmar were controversial to say the least and many would like to believe that it was a little misplaced in the historic speech.

Obama, while reminding India of its responsibility, said, "Now, let me suggest that with increased power comes increased responsibility. The United Nations exists to fulfill its founding ideals of preserving peace and security, promoting global cooperation, and advancing human rights. These are the responsibilities of all nations, but especially those that seek to lead in the 21st century."

"And so we look forward to working with India -- and other nations that aspire to Security Council membership -- to ensure that the Security Council is effective; that resolutions are implemented and sanctions enforced; and that we strengthen the international norms which recognise the rights and responsibilities of all nations and individuals."

He spoke a lot about India's importance and his seriousness for bilateral relations. He spoke in detail about various sectors where both countries are cooperating.

Obama did not forget to pitch for his favourite theme -- nuclear non-proliferation. He said, "We have put preventing nuclear proliferation and nuclear terrorism at the top of our nuclear agenda, and strengthened the cornerstone of the global non-proliferation regime -- the Nuclear Non Proliferation Treaty."

At this point he mentioned Iran, with whom India has an age-old connection.

"We can make it clear that even as every nation has the right to peaceful nuclear energy, every nation must also meet its international obligations -- and that includes the Islamic Republic of Iran. And together, we can pursue a vision that Indian leaders have espoused since Independence -- a world without nuclear weapons."

Interestingly, his statements on a joint endeavour between India and the US in spreading the idea of open government may raise eyebrows in China and the details will come under scrutiny.

"Now, in a new collaboration on open government," Obama said, "our two countries are going to share our experience, identify what works, and develop the next generation tools to empower citizens."

"We're going to show that democracy, more than any other form of government, delivers for the common man and woman."

"I want every Indian citizen to know: The United States of America will not simply be cheering you on from the sidelines. We will be right there with you, shoulder to shoulder -- because we believe in the promise of India. And we believe that the future is what we make it."

"We believe that no matter who you are or where you come from, every person can fulfill their God-given potential, just as a Dalit like Dr Ambedkar could lift himself up and pen the words of the Constitution that protects the rights of all Indians."

He also quoted the philosophy of the Panchtantra. "It's a simple lesson contained in that collection of stories which has guided Indians for centuries -- the Panchtantra. And it's the spirit of the inscription seen by all who enter this great hall: 'That one is mine and the other a stranger is the concept of little minds. But to the large-hearted, the world itself is their family."

Also read: Rediff.com scooped the Obama-UN story on Oct 15!
The critical points Obama made in Parliament
Obama in India: The best coverage, only on Rediff.com