The US is learnt to have asked Israel to sever ties with China, especially in areas with security risks. 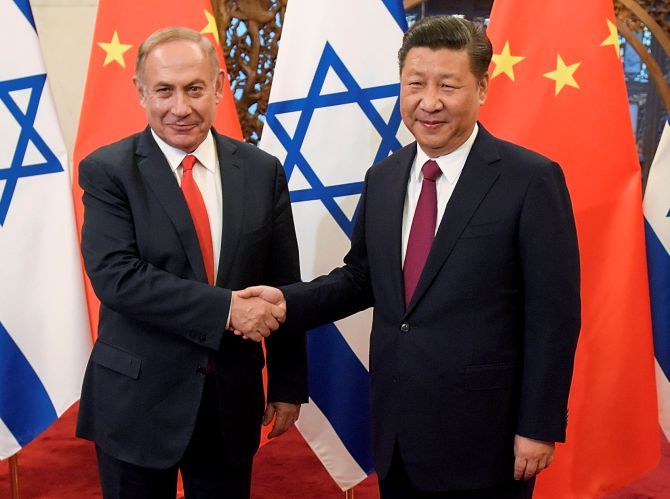 China's onetime cosy relations with Israel are now in steep decline and in line with a pattern which is emerging from Japan to India where China appears to be on an unexplained path of aggression.

The Jerusalem Post, quoting a United States official with knowledge of talks on the matter, said in a report that Washington, DC had last week asked Israel to sever ties with China, especially in areas with security risks.

Even during his trip to Israel on May 13, US Secretary of State Mike Pompeo had asked Tel Aviv to reconsider some of its joint projects with Beijing.

The recent pressure from US marks an escalation of the heightened feud between Washington, DC and Beijing over the outbreak of coronavirus pandemic.

It also focuses on the establishment of a more robust review process for foreign investments that could pose risks, and a reduction of reliance on China for emergency equipment in light of the pandemic, jeopardizing ties between Jerusalem and Beijing.

Chinese companies are operating in Israel today in deals reaching more than $20 billion and more is on the way.

Jerusalem has gone so far as to even allow Chinese companies that do business in Iran to compete for major infrastructure projects in the State of Israel.

As per media reports, the US request is based on two motivations.

The first seems to be a desire to punish China for hiding news of the original outbreak of the novel coronavirus from the world and then not doing enough to stop it from reaching US shores.

US President Donald Trump, for example, has long called COVID-19 a 'Chinese virus', going so far as to accuse President Xi Jinping for standing behind a 'disinformation and propaganda attack on the United States and Europe'.

'It all comes from the top,' Trump tweeted last week.

'They could have easily stopped the plague, but they didn't!' Earlier this month, Pompeo told ABC's This Week that there is 'enormous evidence' that the virus came from a Chinese lab in Wuhan, the original site of the outbreak,' he added.

The US is upset with China and wants it to pay a price.

The best way to do that is to hurt its pocket and to get American allies like Israel to reconsider their trade and joint infrastructure projects with China.

The second motivation is the fear from Chinese espionage.

Back in 2000, after the cancellation of the planned sale of the Phalcon AWACS China, Israel made a decision not to sell Beijing any military equipment. It was a decision based on an ultimatum that if Israel continued selling weaponry to China it would lose American support.

The US and Israel share some of the most sensitive intelligence with one another. In addition, American defense contractors sell Israel some of the most classified military hardware and weapons in the US like the F-35 fifth-generation stealth fighter jet.

The US is concerned that with China building most of Israel's infrastructure -- roads, trains, tunnels, ports and more -- it will eventually gain access to the lines of communication through which Israel and the US communicate intelligence with one another.

That is something that Washington, DC will not tolerate.

"I don't think polite deflection will cut it anymore," he stated.

"This is a high priority for the US," a senior State Department official was quoted as saying by the Post.

"China is an important trade partner for Israel and we hope it will remain that way but clearer lines need to be drawn and there is no better time to do so than the present," the official added.