Have faith in me: PM assures Assam on citizenship bill

Allaying fears of the people of the northeast over the Citizenship (Amendment) Bill, Prime Minister Narendra Modi on Thursday asserted his government would safeguard their language, culture and identity "under all circumstances". 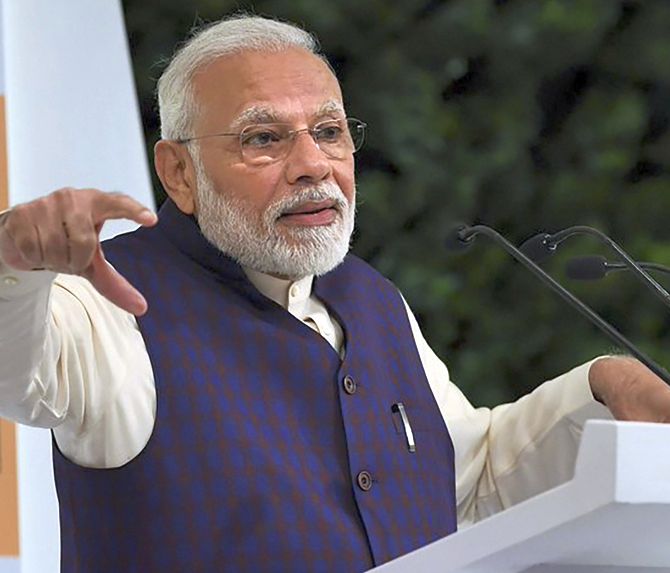 Addressing a poll rally in Jharkhand's Dhanbad, he charged the Congress with spreading misinformation in the region over the legislation, which has been passed by Parliament.

"I want to assure every state, every tribal society in the northeast and the eastern part of the country including Assam that preserving their culture is our priority. Today, I appeal to my brothers and sisters of Assam to have faith in Modi. No harm will come to them and their tradition, culture and way of living," he asserted.

Protests have erupted across northeast, especially Assam and Tripura, over the Citizenship (Amendment) Bill, with several civil society groups, students' unions and political parties seeking immediate withdrawal of the legislation, contending that it would threaten the interests of indigenous people.

According to the bill, non-Muslim minorities, who fled religious persecution in Pakistan, Bangladesh and Afghanistan and moved to the country before December 31, 2014, will be accorded Indian citizenship.

The legislation has, however, exempted from its purview tribal areas of Assam, Meghalaya, Mizoram or Tripura as included in the Sixth Schedule to the Constitution and areas covered under The Inner Line, notified under Bengal Eastern Frontier Regulation, 1873.

The PM asserted that the bill would have no impact on the country's citizens and those saying otherwise are lying to mislead common people.

"When Taliban attacks were on the rise in Afghanistan, dozens of Christian families came to India, fearing for their lives. But the Congress government did not support them.

"Today, when the BJP is trying to bring a law to grant citizenship to millions of such oppressed and exploited, Dalit, Sikh, Christian families, the Congress is opposing the move," he said.

"If the Congress and its allies gave anything to Dhanbad, Deoghar and Jharkhand, it is dust, smoke and deception. People were deprived of basic facilities," he said.

The prime minister contended that he never cared about vote bank politics and always believed in working for the welfare of people.

"The Congress had deliberately kept the Ram Janmabhoomi dispute hanging for decades. Matters of national interest are secondary for them.

"They had also kept the issue of Jharkhand's creation pending for five decades. It was the Atal Bihari Vajpayee-led government that created Jharkhand," he noted.

Modi said his government believed in taking strong decisions, and once it had resolved to do anything it would go to any extent to do it.

"We had said in our manifesto that Article 370 will be repealed. We did it, and today the Indian Constitution is applicable to whole of Kashmir. We promised Ram Janmabhoomi tangle will be resolved peacefully and we did it," he asserted.

Modi said the Congress did not take a strong decision on instant triple talaq for fear of losing its vote bank.

He said outlawing the practice will not only safeguard the interests of Muslim women but also benefit Muslim men.

Listing out the achievements of the BJP-led governments at the Centre and the state, he said the Jal- Jeevan mission, launched earlier this year, will end the water crisis faced by people.

"The Congress, JMM and their allies lack resolve and the power to think. They fanned naxalism, neglected development, and looted the state by dispatching coal to other areas. They created a bizarre political situation in the country, forcing people to lose confidence in them.

"The BJP government, on the other hand, has consistently worked for people's welfare. By 2022, nobody has to live in slums. Pucca dwellings will be built for them. The BJP government has launched health schemes, set up medical colleges for people here," he said.

The prime minister contended that he was committed to fulfilling people's dream and aspirations.

"I don't run after material wealth or affluence. I don't get to sleep peacefully at night. I will continue working to fulfil the dreams of people, even if that comes at the cost of my well-being," he added.

Polling will be held in Dhanbad on December 16 in the fourth phase of Jharkhand polls.

Earlier, in a series of tweets, in both Assamese and English, the prime minister said he personally and the Central government are "totally committed to constitutionally safeguard the political, linguistic, cultural and land rights of the Assamese people as per the spirit of Clause 6."

"I want to assure my brothers and sisters of Assam that they have nothing to worry after the passing of #CAB (sic)," PM Modi wrote on the microblogging site.