Ahead of the Bihar assembly polls, Rashtriya Janata Dal leader Tejashwi Yadav on Friday hit out at Bihar chief minister Nitish Kumar over unemployment, education and health infrastructure, stating that the Janata Dal-United chief was tired and cannot handle the state. "Bihar chief minister Nitish Kumar is tired and can not handle the state. He does not want to talk about development, unemployment, education, health infrastructure and poverty. He says Bihar is a landlocked state hence industries can not be set up resulting in no job creation," Yadav told media reporters in Patna.

On Wednesday, the RJD leader filed his nomination from Raghopur constituency to contest the upcoming Bihar polls.

Soon after filing nomination from Raghopur constituency on October 16, he said: "We will fulfill our promises. We will form the government. We are hopeful that the people of Bihar will elect us."

The Congress, the Communist Party of India-Marxist and the CPI are part of RJD-led "Mahagathbandhan" (grand alliance).

Bihar with 243 assembly seats will go to polls in three phases: October 28, November 3 and November 7.

The results will be declared on November 10. 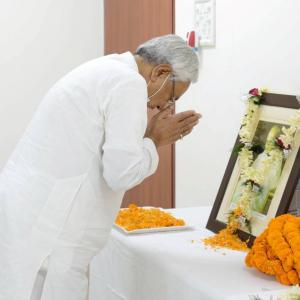