'Maybe the BJP believes, in the post-poll scenario, it will have the might to foist, anybody endorsed by the RSS, upon Bihar,' observes Mohammad Sajjad. Every election carries some unique features. Bihar 2020 is no exception.

Essentially speaking, cutting across the social groups and political formations, there is almost a consensus that the incumbent Nitish Kumar does not have a matching rival for the chief ministerial post.

Ironically, this is the case even when his performance in every respect (governance, development, delivery of welfare schemes to the public) has dissipated considerably.

Despite this dissipation, even his ally, the Bharaiya Janata Party, is trying to locate a replacement.

While the BJP announced Nitish Kumar as the National Democratic Alliance's candidate for chief minister, it also asked another NDA ally, the Lok Janshakti Party, to checkmate Nitish's Janata Dal-United.

There are many who believe that the BJP is less interested in Bihar, and more interested in West Bengal 2021, where it will engage in a direct contest with the incumbent Trinamool Congress.

The BJP, because it does not have a credible and promising chief ministerial face, possibly does not want to discredit itself in Bihar before going to West Bengal.

Or maybe the BJP believes, in the post-poll scenario, it will have the might to foist, anybody endorsed by the RSS, upon Bihar, and that will be acceptable to its people.

It has done so in Haryana (Manoharlal Khattar) and Jharkhand (Raghubar Das, an OBC from Chhattisgarh).

Be that as it may, there is yet another interesting feature of Bihar 2020 -- that the Hindu upper castes this time are more keen to have the BJP as the hegemonic political force in Bihar.

Given this situation, Bihar needs to introspect on yet another aspect of its many-sided deficit: An unprecedented leadership crisis.

The desperation of the upper castes has been there in Uttar Pradesh as well since 1989-1990.

With Ajay Mohan Bisht's appointment as UP chief minister in March 2017, the upper castes have staged a comeback in the state and it remains to be seen if the stories of horrific persecution of the women of the subjugated castes (mostly Dalits), will really result in a regime change in UP or if it will it have any impact in the Bihar election?

In Bihar, the dominant Dalit caste, Paswan, under Ram Vilas Paswan's leadership, has consistently demonstrated that they go quite solidly with their leader.

This has been the LJP's strength.

But the Paswans of Bihar feel leaderless after Ramvilas Paswan and his younger brother Ramchandra Paswan passed away.

There is a possibility that this will create some sympathy and even if Chirag Paswan does not have an effective connect with the Paswans in Bihar, he may succeed in retaining or strengthening his base among his caste as well as in getting the votes transferred to its ally, the BJP.

Such a scenario may be more helpful for the BJP, and thereby more damaging for the JD-U.

Nitish may have to worry on this count.

It is a foregone conclusion that the post-poll eventuality of the BJP's effort at replacing Nitish Kumar will have greater success in obtaining support from smaller allies like Jitan Ram Manjhi and Mukesh Sahni. As of now, the BJP has the least to worry about spoilers (vote-katwas).

That worry is greater for the Rashtriya Janata Dal-led Mahagathbandhan. Here are the reasons:

Pappu Yadav, through his Jan Adhikar Party, has been doing a lot to invest in populism and in reaching out to people across Bihar.

His most recent populist interventions were helping stranded migrant Biharis during the lockdown.

His foray is mostly among the Yadavs and Muslims, an essential RJD core base.

Add to it the fact that almost 40% of Yadavs have been voting for the BJP.

Under the leadership of Narendra Damodardas Modi and Amit Anilchandra Shah, the Muslim communities, even for the 'secular' parties, have become politically untouchables.

On lynching and other kinds of oppression and victimisation (including disenfranchisement through new citizenship laws) that Muslims have been suffering in recent years, the regional, caste-based, dynasty-perpetuating parties have hardly spoken out for the Muslims.

Such battles have been equally lonely in Bihar where all regional and sub-regional forces have been getting Muslim votes in varying proportions.

The greatest beneficiary of Muslim votes -- the RJD and the Congress -- have disappointed Muslims as much as any other formation.

This is testified by the fact that while announcing the seat-sharing arrangements to the media, the Mahagathbandhan did not have a single Muslim leader on the dais.

With this kind of isolation and peripheralisation, sections of Muslim communities have added reason to harbour sympathy for a leader like Asaduddin Owaisi.

Owaisi has been working hard in the Muslim concentration regions of Bihar: Kishanganj and the adjoining districts called Seemanchal.

This region is also contiguous with the four northern districts of West Bengal having a substantial Muslim population.

While Owaisi may win some seats in Seemanchal, his candidates could cut into Muslim votes for the Mahagathbandhan in many seats in and outside Seemanchal.

Given the degree of majoritarianism, beyond Seemanchal, fewer Muslim candidates have secured Mahagathbandhan tickets.

The seats with 20% or more Muslim votes, and with a history of having been represented by a Muslim legislator, are witnessing strong and strident disenchantment. 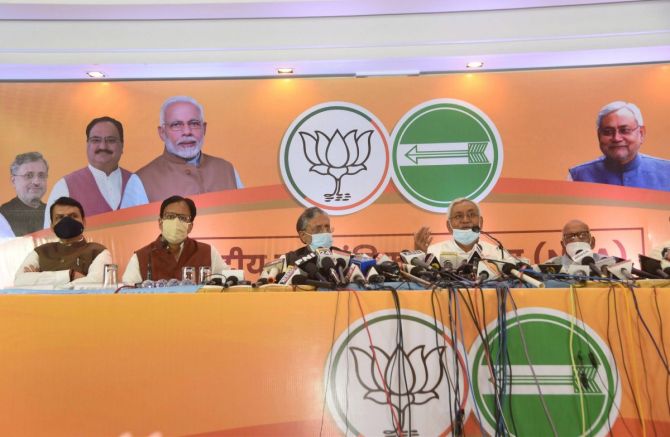 Constituencies where Muslims number below 20% and don't have Muslim candidates have just one concern -- that the BJP should not be able to raise its tally in the Bihar assembly.

The Muslim desperation, particularly in such seats, is so great so that even their strong grievances against Nitish Kumar may become a lesser concern in certain seats where the JD-U candidate has some credentials of being not so much explicitly anti-Muslim.

Some sections of Muslims rationalise this, saying just as the Congress has de-saffronised the Shiv Sena in Maharashtra at least for the time being, the JD-U has in a way checkmated the BJP in becoming a brute power hegemon in Bihar.

Also, some Pasmanda Muslims have obtained state favours in terms of representation and clientelism via Nitish's JD-U; in addition to that, proximity of some Muslim ulema with Nitish is also a factor.

There is a very small section within the Muslims who wish to propose that on an experimental basis, Muslims should withdraw from the process of electioneering. Let the Hindus decide among themselves, and that the Muslims should only cast their votes quite silently and uneventfully. Of course, there are not many subscribers for this proposal.

The RJD has its own problems.

It has not been trying to expand its support base among the lower OBCs (Ati Pichhrha) and MahaDalits in any sincere manner.

It has doggedly refused to project leaders from these social constituencies as future deputy chief ministers.

Given the deficit in age, education, political experience and ability to reach out to and forge a deep connect with the masses, RJD leader Tejashwi Yadav is hardly acceptable as chief minister beyond his Yadav community.

The RJD has tried to dent the BJP's upper caste vote base via its alliance with the Congress and among the economically weaker upper and dominant castes through the traditional Left.

At the same time, through the CPI-ML (Liberation), the RJD has tried to reach out to the historically oppressed castes.

There is no denying that such alliance could be expected to help the Mahagathbandan significantly. IMAGE: Migrant, Bihari workers board a tempo in Patna during the nartional lockdown to reach their villages. Photograph: PTI Photo

Tejashwi, while attacking his Nitish chacha, more through social media and less on the streets (even in the pre-lockdown era), has not been able to enforce strident campaigns against the failings of Nitish's governance: The rise in crime.

Neither the RJD-Congress nor the Left, nor even the still un-saffronised media, have exposed the rise of organised crime more particularly since 2016, through bootlegging.

Gangsterism has risen in rural areas and small towns with the local police allegedly complicit in the racketeering.

Even in the Muzaffarpur shelter home horror, the RJD reacted rather belatedly and with visible restraint.

This may be one reason why the JD-U has no qualms in fielding an accused as a candidate.

Likewise, on the Srijan scam as well as on the issues of stranded Bihari labourers during the pandemic, and on flood issues too, the RJD has hardly been strident on the streets.

Tejashwi has been missing in action as much as the ruling dispensation.

Perhaps because the RJD carries such heavy baggage of non-performance on governance and development, it never feels confident enough to hit the streets pursuing such politics against the Bihar government.

Or, maybe, majoritarianism is so deep that nothing is going to really help the Opposition!