Israeli Prime Minister Benjamin Netanyahu and his close advisers have been placed under quarantine after an aide on parliament affairs tested positive for coronavirus, his office said on Monday. The step was a precaution and is being taken even before the epidemiological investigation has been concluded, according to a statement issued by the prime minister's office.

"In accordance with the findings, the health ministry and the personal physician of the prime minister will set a day to end the isolation," it added.

Earlier, his office said "the move was unnecessary" as the premier had not been in the same room as the concerned adviser, Rivka Paluch, during the last two weeks.

"The initial assessment is that there is no need for the prime minister to be in quarantine since he was not in close contact with the patient and did not meet with her," the PMO earlier said.

"Likewise, from an initial check, the two were not together in the same room for the past fortnight. The epidemiological investigation is ongoing," it stressed.

The statement had also emphasised that the prime minister and those around him have been strictly adhering to the health ministry guidelines during the past few weeks, under the watch of his personal physician, and that most discussions Netanyahu holds are via video-link from his residence.

Hebrew language media, however, contradicted these claims, saying Netanyahu had in fact met with Paluch, along with a reported confirmation from his office.

Paluch, Netanyahu's adviser on ultra-Orthodox affairs, tested positive hours after her husband was hospitalised with COVID-19.

She met with several lawmakers on Thursday amid negotiations with Blue and White leader, Benny Gantz, over the formation of a coalition government, according to Channel 12.

The prime minister's office had reportedly confirmed on Sunday that Paluch did meet with Netanyahu on Thursday but said that 'the appropriate distance was kept'.

"The rules for keeping distance from the prime minister and those near him were maintained in accordance with the instructions of the health ministry, even before the family member was found positive," sources close to Paluch told the chanel on Sunday.

Netanyahu was previously tested negative for the virus two weeks ago.

According to Channel 12, the prime minister will likely need to undergo another test for the virus on Monday.

There was no immediate word on the adviser's condition.

Israel is under total lockdown with people not allowed to even walk beyond 100 metres from their homes and have been generally advised to go out only to stock up food.

So far, 4,347 Israelis have tested positive for the coronavirus, with the vast majority of cases mild and 134 recoveries. Sixteen patients have died and 95 are in serious condition. One Israeli tourist died in Italy. 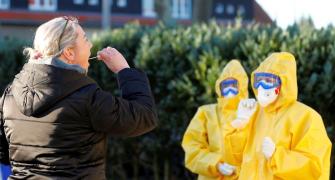