India will receive normal monsoon this season, country's meteorological department said on Wednesday in its forecast for the Southwest monsoon that covers 75 per cent of the country, and thereby may bring much-needed respite to the economy, which is reeling under the catastrophic effect of the Covid-19 pandemic. 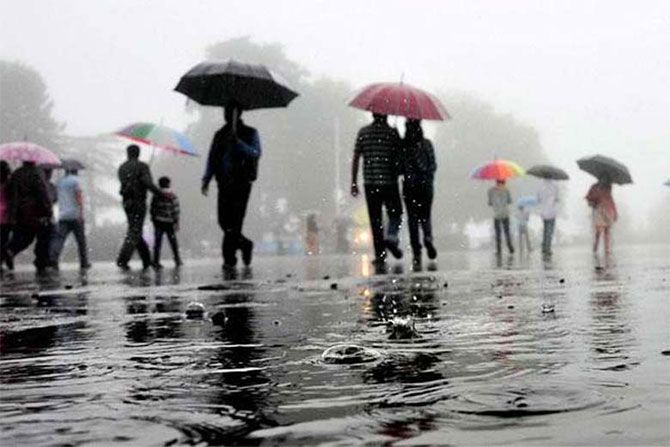 Addressing an online briefing, IMD Director General M Mohapatra said quantitatively, the rainfall is likely to be 100 per cent of the Long Period Average (LPA) in the monsoon season (June-September) with a model error of 5 per cent.

"In these difficult times of coronavirus, the good news is that the country will receive normal rainfall during June to September. This will help our agriculture sector and better crop yield. It will definitely help in economic growth of the country," said M Rajeevan, secretary, ministry of earth sciences.

"The country will receive normal rainfall this season," Mohapatra said.

The IMD defines 'average' or 'normal' rainfall as between 96 per cent and 104 per cent, and the LPA of the seasonal rainfall across the country for the period 1961-2010 is 88 centimetres.

The country receives 75 per cent of its rainfall from the southwest monsoon during June to September. It is not only crucial for farming in the country, but also for replenishing the reservoirs, and more importantly to the economy which is still largely dependent on agriculture.

Northeast monsoon is another phenomenon that brings rainfall to the Tamil Nadu, Puducherry, parts of Kerala and Andhra Pradesh during October to December.

However, the onset date for monsoon over Kerala, which is June 1, remains unchanged, Rajeevan said.

For the national capital, the new normal onset date for monsoon has been revised from June 23 to June 27 -- a delay of four days. Similarly, dates have been revised for Mumbai and Kolkata from June 10 to 11, and for Chennai from June 1 to 4. 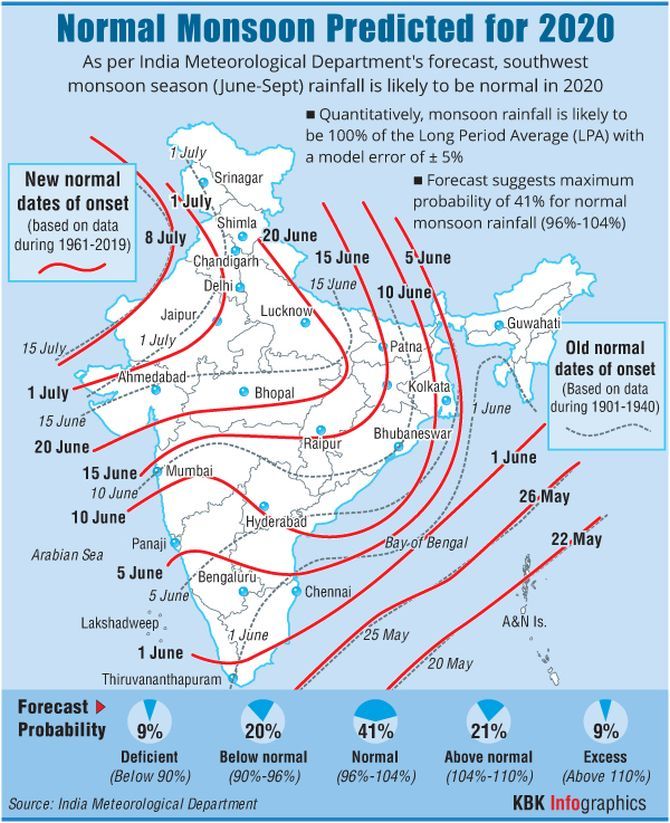 However, over extreme northwest India, the monsoon will arrive a little earlier, on July 8, as compared to the existing date of July 15. The new date for monsoon withdrawal from south India is October 15.

The IMD, the weather forecaster of the country, attributed the forecast of normal monsoon to a neutral atmospheric changes 'El Nino' and a possible 'La Nina' during the second part of the four-month rainfall season from June to September.

Forecast models suggest that there is a 41 per cent chance of the season receiving normal rainfall and only 9 per cent possibility of a deficient monsoon.

"However, a few other global climate models indicate the possibility of development of weak La Nina conditions over the Pacific Ocean during the second half of the season,” Rajeevan said.

"La Nina, or cooler-than-usual sea surface temperatures in the east-central Pacific Ocean, is typically associated with better monsoon rains and colder winters in India while El Nino is associated with below-normal rainfall in the country,” Rajeevan said.