Karnataka and Kerala are battling floods as rivers flowing through the states have swelled up after heavy downpour in the region. 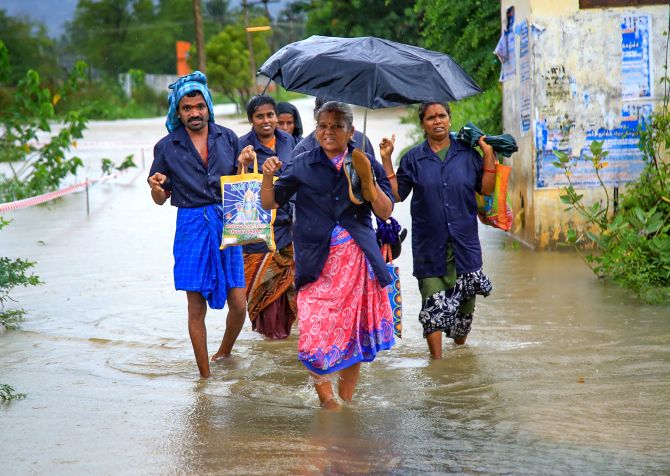 The IMD has predicted heavy rainfall over Karnataka and Kerala for the next few days.

The fishermen have been warned not to go out to sea as squally weather with wind speed reaching 45-55 kmph is likely to prevail over the Kerala coast.

For the past few days, torrential rains in north interior Karnataka has wrecked havoc as many rivers, rivulets and small streams are in spate, reminiscent of the floods in August this year, official sources said.

The affected districts are Dharwad, Belagavi, Kalaburagi, Gadag, Vijayapura, Bagalkote, Shivamogga and Chikkamagaluru, where water has gushed into houses and government buildings, including schools and banks in low-lying areas.

Belagavi, yet to recover from the flood-fury two months ago, once again bore the brunt of the heavy downpour. 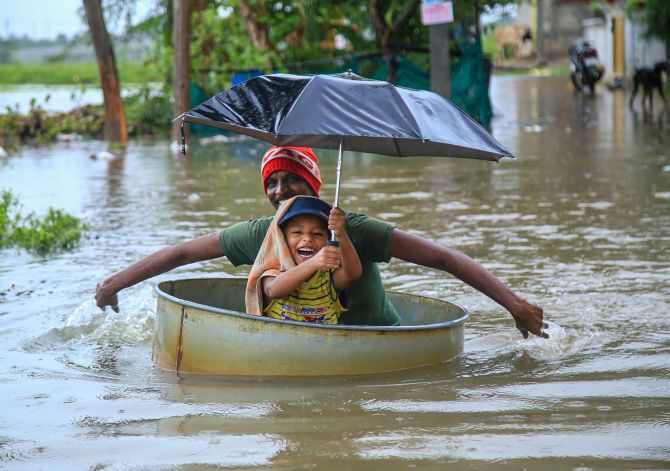 IMAGE: A man and a child use a container to move through a flooded locality after heavy rains. Photograph: PTI Photo

Rain water gushed into many houses in low-lying areas in Chikkodi and some other places, forcing people to take shelter on roof-tops.

Three houses collapsed in Shahpur, a suburb of Belagavi city.

Many inter-village connectivity roads were inundated, causing stoppage of traffic.

The Belagavi-Goa route was also affected near Jamboti due to a landslide, which swept away many parked vehicles, the sources said. 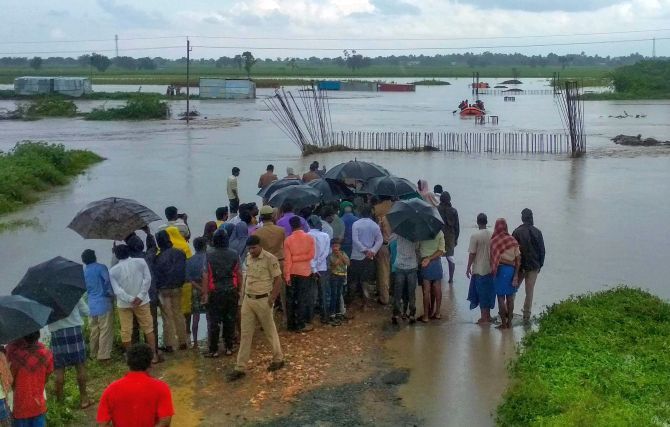 IMAGE: A view of a flooded area in Hubballi district of Karnataka. Photograph: PTI Photo

In Belagavi district's Gokak town, water from the Ghataprabha river inundated many areas, creating panic among the residents.

Ernakulam district in Kerala has been affected badly due to heavey downpour.

The MeT department has forecast heavy rains for many parts of the state, forcing the authorities to sound orange alerts in many districts.

The state government said NDRF teams -- one to Kollam, one to Alappuzha, one at Ernakulam and one at Pathanamthitta -- have been deployed to deal with the station. 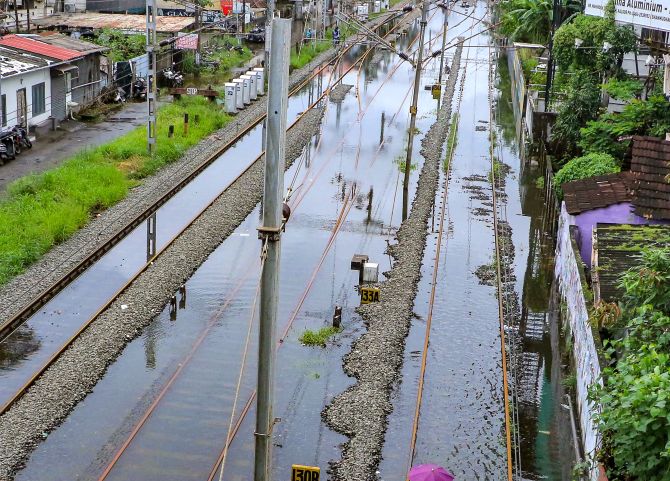 Many areas in Kochi including Ernakulam South, Panambilli Nagar and Ayyappankavu were waterlogged.

Heavy rains also affected the bypolls to the five assembly constituencies in Kerala on Monday as voters waded through water-logged roads to exercise their franchise.

While polling was underways, water seeped into some booths as well.

Many areas in Kochi city were declared flood affected by the Ernakulam district administration.

Three camps have been opened in Ernakulam district to relocate the people affected by rains. 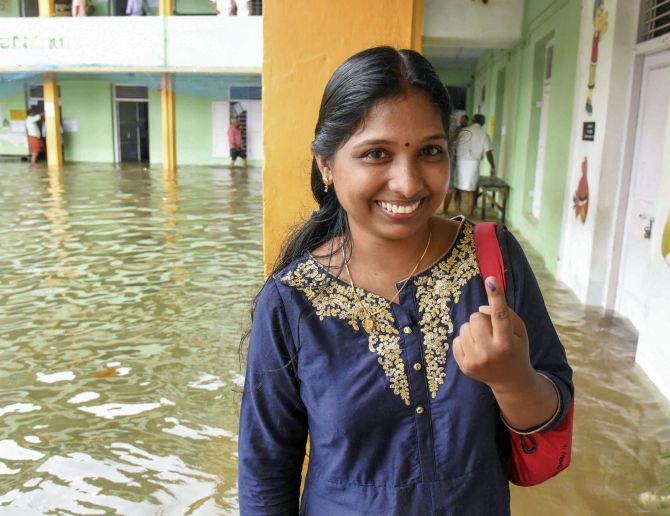 IMAGE: A woman shows her finger marked with indelible ink after casting her vote at a polling station inundated in rain water following heavy rainfall during the bypolls for assembly seats in Ernakulam district. Photograph: PTI Photo

Train services in the state have been affected due to the rains.

Train services via stations in Ernakulam have been affected due to heavy rainfall and waterlogging, Railway officials said here on Monday.

"Ernakulam Junction and Ernakulam Town stations are waterlogged, train services in all directions through these stations will be delayed till water level recedes," a Southern Railway spokesman said.

The situation turned worse as many people were left stranded for several hours at railway stations. 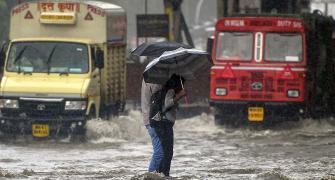