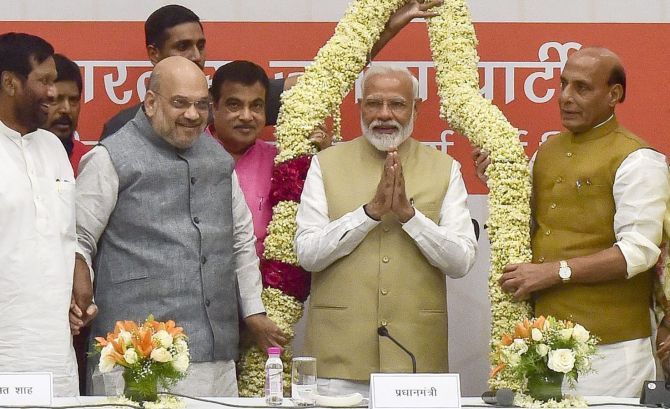 Capping a landslide election victory, Prime Minister Narendra Modi will take oath along with a new council of ministers on Thursday for a second term, as suspense mounted on who will get the Big Four berths -- Home, Finance, Defence and External Affairs.

Top Opposition leaders including Congress president Rahul Gandhi and United Progressive Alliance chairperson Sonia Gandhi, corporate honchos, film stars, chief ministers and a galaxy of leaders from BIMSTEC (Bay of Bengal Initiative for Multi-Sectoral Technical and Economic Cooperation) countries will be on hand to watch President Ram Nath Kovind administer the oath of office and secrecy to 68-year-old Modi and his ministerial colleagues at the forecourt of majestic Rashtrapati Bhavan.

Modi and Bharatiya Janata Party president Amit Shah held a marathon meeting for the second consecutive day on Wednesday during which they are learnt to have finalised the broad contours of the new ministry that is expected to have some new faces besides retaining most of the senior ministers.

Though there is an intense buzz that Shah, credited for crafting the political strategy for the BJP, may be part of the new government and be given a plum portfolio, there was no clarity yet on him making a ministerial debut at the Centre.

There was also speculation that Shah might continue as BJP chief since assembly elections in some key states are due to be held in the next one year.

Many BJP leaders are of the view that most key members of the previous Cabinet could be retained.

Irani, who defeated Rahul Gandhi in his home turf of Amethi in Uttar Pradesh to earn the tag of giant killer, is expected to get a key portfolio.

A day before the swearing-in ceremony, Finance Minister Arun Jaitley wrote to Modi saying he does not want to be a minister in the new government on health grounds.

There have been indications that the new ministry will reflect the BJP's rising strength in states like West Bengal, Odisha and Telangana.

As far as allies are concerned, both the Shiv Sena and the Janata Dal-United are expected to get two berths (one cabinet and one MoS) each, while the Lok Janshakti Party and the Shromani Akali Dal may be given one berth each.

Bihar Chief Minister Nitish Kumar had a meeting with Shah on Wednesday and the two leaders are understood to have discussed the JD-U's representation in the government.

The LJP on Tuesday passed a resolution, recommending its president Ram Vilas Paswan as the party's representative in the Modi government.

The All India Anna Dravida Munnetra Kazhagam, which was also not part of the previous government, won only one seat.

It may be given a ministerial berth as it is in power in Tamil Nadu besides being a key Dravidian ally of the BJP.

Around 8,000 guests are expected to attend the swearing-in ceremony at the forecourt which is generally used for ceremonial reception to visiting heads of state and heads of government.

When Modi is sworn-in at around 7 pm, it will be the second time he takes the oath at the forecourt of Rashtrapati Bhavan.

Modi was sworn in by the then President Pranab Mukherjee in 2014 in the presence of over 3,500 guests including the heads of South Asian Association for Regional Cooperation countries.

Earlier, Chandra Shekhar in 1990 and Atal Bihari Vajpayee in 1999 were sworn in at the sprawling forecourt.

The government has also invited the current chair of Shanghai Cooperation Organisation and Kyrgyz President Sooronbay Jeenbekov, and Mauritius PM Pravind Kumar Jugnauth for the event, and both of them have confirmed their participation.

Though Banerjee had initially said she will attend the event, on Wednesday she announced that she will skip it, taking strong note of the BJP's allegation that 54 of its workers had been killed in political violence in West Bengal.

The invitation to opposition leaders is seen as Modi's move to reach out to them following the fiercely fought election in which the BJP registered a massive victory.

Modi led BJP to a back-to-back majority for a single party in over three decades with the party winning 303 out of 542 seats in the lower house of parliament.

A multi-layered security arrangement will be in place in the national capital on Thursday, with deployment of around 10,000 security personnel from the Delhi police and paramilitary forces.

"Over 10,000 security personnel from Delhi police and paramilitary forces have been deployed on account of the swearing-in-ceremony," the official said.

Another police official said over 2,000 security personnel will also be deployed along the route to be taken by Modi and other foreign dignitaries.

A traffic advisory issued a day ahead of the ceremony said several roads in New Delhi district will be closed for movement of public between 4 pm and 9 pm on Thursday and motorists and public were asked to avoid them.

The advisory further said roads including Rajpath -- from Vijay Chowk to Rashtrapati Bhavan, Vijay Chowk and adjoining areas including North and South fountain, South Avenue, North Avenue, Dara Shikoh Road and Church Road will be closed for public between 4 pm and 9 pm.

Similarly, traffic diversions will be given on Khushak Road, K Kamaraj Marg, Rajaji Marg, Shanti Path, Raisina Road -- beyond Rail Bhawan roundabout towards Parliament House and Moti Lal Nehru Marg (beyond roundabout Udyog Bhawan towards RP Bhawan) which are expected to face congestion due to the ceremony, the traffic official added.

Traffic signages have been provided for the information of invitees and public. All motorists are advised to follow the directions of the traffic police on duty, the advisory added.

Why Modi didn't want Imran at his swearing in
Modi will retire on September 17, 2025
Top 10 winning candidates and highest margins 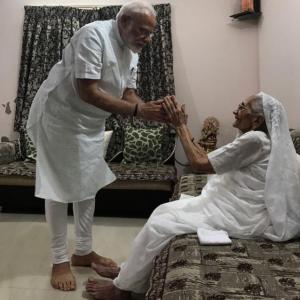