Rajasthan Chief Minister Ashok Gehlot said on Thursday that whatever was the 'misunderstanding' in the Congress party, it should be 'forgiven and forgotten' for moving forward. The Congress crisis in Rajasthan appears to have ended with the intervention of top leaders Sonia Gandhi, Rahul Gandhi and Priyanka Gandhi Vadra who met rebel leader Sachin Pilot earlier this week.

Pilot had openly rebelled against Gehlot last month along with 18 other Congress MLAs. He was then sacked as deputy chief minister and the party's Rajasthan chief.

'We have to put all our energies in this fight to save democracy with the spirit of forgive and forget and move forward,' he wrote on Twitter.

The Rajasthan Chief Minister claimed a 'very dangerous' game to undermine the democracy is going on in the country.

The struggle of the Congress is to save democracy under the leadership of the party president Sonia Gandhi and Rahul Gandhi, he said.

'Save democracy should be our priority with the spirit of forgive and forget. The conspiracy that is going on to topple elected governments one by one in the country, the way governments were toppled in the states of Karnataka, Madhya Pradesh, Arunachal Pradesh and other states.

'How ED, CBI, Income Tax, the judiciary have been misused, it is a very dangerous game that is going on to undermine democracy,' Gehlot said in a series of tweets.

Ahead of the Assembly session beginning Friday, the dissidents MLAs have reached Jaipur following the intervention of the Congress high command on Monday.

The MLAs in the Gehlot camp were on Wednesday flown back to Jaipur from Jaisalmer, where they were together at another hotel.

They were taken straight from the airport to the Fairmont hotel on the outskirts of the city, where they had stayed before being moved to Jaisalmer.

The MLAs -- mostly from the Congress and some allies -- are expected to remain there till the assembly meets on August 14. 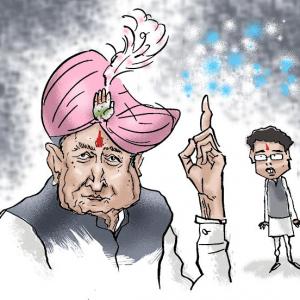