People's Democratic Party president Mehbooba Mufti said on Monday that she will not contest elections until 'both the constitutions' of India and the erstwhile state are made applicable to Jammu and Kashmir. "Personally, it (abrogation of article 370 and 35-A) is a very emotional for me. I contested the first election taking oath under the constitutions of India and state. I took both flags in my hands.

"Until both constitutions will not be (existing) together (in J-K), I have said I will not personally contest elections," the former chief minister told reporters in Jammu.

Replying to a question on contesting elections and becoming a chief minister, she said the PDP has several capable people and not just Mehbooba Mufti alone.

Mufti also criticised the Jammu and Kashmir administration over its decision to sack sons of Hizbul Mujahideen chief Syed Salahuddin from government services, saying 'you can't hold a child responsible for the actions of his father until and unless you have a proof'.

"I have said this again and again, you can capture a man but not an idea. You've to address the idea, as Vajpayee ji did. Witch-hunting, criminalisation of dissent is taking our nation back," she added.

The Jammu and Kashmir administration had sacked 11 of its employees, including sons of the Hizbul Mujahideen chief and two from the police department, for allegedly working as over ground workers for terrorist organisations, officials said on Saturday.

Mufti said that the Gupkar alliance, which was formed on two main issues of abrogation of Article 370 and 35-A, has remained strong and united as aspirations of people of Jammu and Kashmir are attached to it.

"It seems the only motive behind the abrogation was to loot J&K. Let us start from sand mining (by giving contract to outsiders). First Jammu was called city of temples, now they want to make it city of liquor.

"Those contracts too were given to outsiders. People from outside are being given top positions at Chenab Valley Power Projects. Our water and electricity are going outside," she told reporters in Jammu.

Replying to a question about the agenda of the Gupkar alliance, she said, "Gulpkar alliance has remained strong and united as aspirations of people of Jammu and Kashmir are attached to it. The People's Alliance for Gupkar Declaration (PAGD) has nothing to do with any action or statement of any alliance party in individual capacity. The PAGD came into existence on two issues - Article 370 and 35-A." 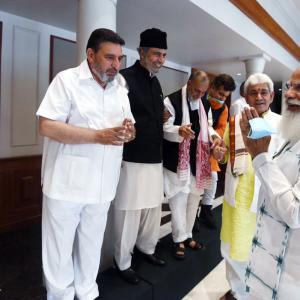