DSP stoned to death by mob outside Srinagar mosque; 2 arrested 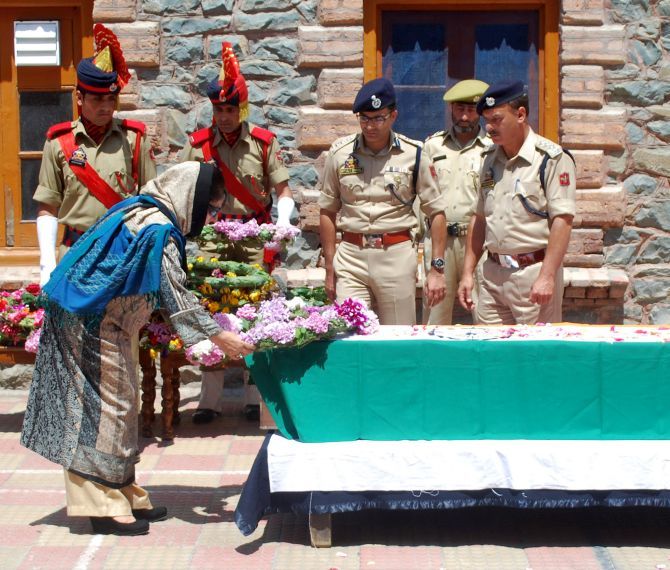 A deputy superintendent of police was stripped naked and stoned to death by a mob outside the historic Jamia Masjid in Srinagar in a bizarre incident which drew all-round condemnation, including from Chief Minister Mehbooba Mufti and separatist Hurriyat leader Mirwaiz Umar Farooq.

Describing the incident as 'shameful', the Chief Minister wondered how long the police would show restraint as she warned that there could be a backlash if the force loses patience.

Mirwaiz, who delivers sermons at the historic mosque in old Srinagar city's Nowhatta area every Friday after prayers, condemned the incident, saying it was 'outside the parameters of our values and religion'.

DSP Mohammad Ayoub Pandith was stripped and stoned to death by the mob at around 12.30 am on Friday when he was caught allegedly clicking pictures of the people coming out of the mosque after 'Shab-e-qadr' prayers, police sources said.

When the mob attacked him, Pandith opened fire from his pistol, injuring three persons.

"The DSP was posted at the access control of the mosque to prevent miscreants from vitiating the atmosphere so that people could offer prayers in peace. But a few among those, for the security of whom he had been deployed there, lynched him," Director General of Police S P Vaid said terming the incident as 'very unfortunate'.

Quoting preliminary investigation, the police chief said the mob attacked the DSP when he was coming out of the mosque after checking the access control.

"When the DSP was coming out after checking the access control of the mosque, some miscreants caught hold of him while raising slogans and started beating him up," he said.

The mob then went on a rampage, targeting empty security pickets in the area. Police reinforcements were rushed to restore normalcy in the area. Vaid said two persons have been arrested so far and a third has been identified.

"Two persons have been arrested so far and a third has been identified. All of them (involved in the lynching) will face the law," the DGP told reporters on the sidelines of the wreath-laying ceremony for the slain officer at district police lines in Srinagar.

The police chief said the line between humanity and inhumanity was fast diminishing and that people needed to distinguish between good and bad.

The investigation of the case is on, he said.

Asked whether the slain officer was there for the security of Mirwaiz Umar Farooq, chairman of moderate Hurriyat Conference, the DGP said, "Mirwaiz does come there. It was a sacred occasion yesterday and thousands of people were expected at the mosque and security was made for them."

Defending the firing by the officer in which three persons were injured, Vaid said, "The DSP was carrying a pistol and he had the right to self-defence."

The incident took place when Muslims across Kashmir were observing 'Shab-e-Qadr' (the night of power) involving night-long prayers and supplications in the mosques and shrines.

The chief minister said the Jammu and Kashmir Police was one of the best police forces in the country and was showing maximum restraint in dealing with law and order situation.

"What can be more shameful than this? I want to say that J-K police is one of the best police forces in the country. They are brave but are showing maximum restraint because they feel that they are dealing with their own people. But for how long? The day their patience wanes, then, I believe, things will be difficult," she said.

Mehbooba was speaking to reporters after attending the wreath-laying ceremony for the slain officer.

"I appeal to the people that there is still time and we should understand. The police force is our own force, they are our children and such a treatment is shameful," she added.

Mehbooba said the officer had not gone to the mosque for personal work but was there to protect the lives of the people and fulfil his duty.

"An SHO along with five cops was killed some days back and now this DSP... I appeal to the people that this is a shameful incident. Those who protect you, show patience while dealing with you...but if you behave like this with them, then if they lose their patience, then God forbid, such a time will come when people have to flee after seeing a (police) gypsy on the road," she said.

In another tweet, he added, 'Mob violence & public lynching is outside the parameters of our values and religion. We cannot allow state brutality to snatch our humanity and values.'

Later, in a statement, he said, 'The incident that happened in Nowhatta outside the historic Jamia Masjid which has always been a centre of spiritual and moral upliftment, is most unfortunate.

'I am deeply disturbed by this brutal act. Mob violence and public lynching is outside the parameters of our values and religion.'

He went on to add, 'it is very important and imperative for us that we do not allow our social fabric to be brutalised and keep our basic values intact.'

Former chief minister and National Conference working president Omar Abdullah, while condemning the killing, said his death was a tragedy and its manner a travesty.

'May the people who lynched DSP Pandith burn in hell for their sins,' he posted on Twitter.

Expressing shock and anguish over the dastardly killing, Omar in a statement said the killing was the height of barbarism and should be condemned unequivocally.

'I'm personally anguished and devastated by this tragedy. That this happened on the most auspicious night and outside Jamia Masjid is shocking.

'Such heinous elements are the enemies of Kashmiriyat and humanity and should be given the sternest possible sentence as per law of the land. We are all duty-bound to stand with the family of the martyred police officer and also the police department in this hour of mourning and grief,' he said.

Omar expressed solidarity with the family and the colleagues of the slain officer and demanded that the culprits be brought to book without any delay and should be given the sternest possible punishment.

He announced a donation of Rs 10 lakh to the police welfare fund on behalf of the party and also a donation of one-month's salary as MLA to the fund as a contribution to support families of such brave martyrs.

Congress vice president Rahul Gandhi termed the lynching incident as 'horrific' and said it marked a new low in the state.

'The brutal lynching of Deputy SP Md Ayub Pandith marks a new low. Pained beyond words at the horrific incident,' tweeted Gandhi, who is on vacations in Italy.

'Heartbreaking to see J&K being pushed back several decades because of the complete failure of the PDP/BJP government,' he tweeted.

Jamia Masjid closed due to restrictions

For the first time, the historic Jamia Masjid here remained closed today on the occasion of 'Jummat-ul-Vida', last Friday of Muslim fasting month of Ramazan, due to strict restrictions imposed by the authorities.

Except for mosques and shrines in seven police station areas of Srinagar, prayers were held in rest of Kashmir to mark Jummat-ul-Vida with religious fervor and gaiety.

The restrictions were imposed in seven police station areas of Srinagar on Friday morning to thwart protests after Friday prayers on the call of separatists against the killing of a civilian on Thursday during a clash between stone-pelters and security forces in the wake of killing of three terrorists in Pulwama district of South Kashmir.

"Friday prayers could not be offered at Jamia Masjid and several other mosques in areas where restrictions were imposed as a precuationary measure to maintain law and order," an official said.

The restrictions around the Jamia Masjid were strengthened in the wake of lynching of Pandith outside the mosque.

There were reports of clashes between stone-pelting mobs and security forces after Friday prayers in some areas of the valley, including Sopore and Hajin in North Kashmir and Anantnag and Pulwama townships in south Kashmir but there was no report of any casualty, officials said.

Criticising restrictions on the movement of people, moderate Hurriyat Chairman Mirwaiz Umar Farooq said, "It is for the first time in the living memory of people that they are being barred from offering 'Juma-tul-vida prayers' at Jamia Masjid by the authorities.

"For the whole year, Muslims of the Valley wait to offer prayers in Jamia Masjid on this most important last Friday of the holiest month of Ramazan to earn reward and seek forgiveness of their almighty. And even that right has been snatched from us."

Mirwaiz, who is the head priest of the Jamia Masjid, delivers sermons at the mosque every Friday after prayers. Hardline Hurriyat Conference chairman Syed Ali Shah

Criticising the state administration for their 'double dealing and fascist mindset', Geelani said, 'on one hand, huge expenses are being incurred and special provisions are being made to facilitate (Amarnath) yatra and on the other, curfew like restrictions are imposed and people bared from offering prayers even on Jummat-ul-vida'.

Image: Jammu-Kashmir Chief Minister Mehbooba Mufti lays a wreath on the coffin of Deputy Superintendent of Police Mohammed Ayoub Pandit who was killed by a mob on Friday. Photograph: Umar Ganie/Rediff.com