West Bengal Chief Minister Mamata Banerjee on Thursday threatened to launch a country-wide agitation if the "anti-farmer" new farm laws were not withdrawn. The Trinamool Congress supremo lashed out at the Bharatiya Janata Party-led government at the Centre over the issue in a series of tweets.

"I am very much concerned about the farmers, their lives and livelihood. GOI must withdraw the anti-farmer bills. If they do not do so immediately, we will agitate throughout the state and the country. From the very start, we have been strongly opposing these anti-farmer bills," she tweeted.

Her statement came ahead of a crucial round of talks scheduled to be held between the Centre and representatives of the agitating farmers during the day.

"We have called a meeting of the All India Trinamool Congress on Friday, December 4. We will discuss how the Essential Commodities Act is impacting common people and resulting in sky rocketing prices. The central government must withdraw this anti-people law," she said in another Twitter post.

"The GOI is selling everything. You cannot sell Railways, Air India, Coal, BSNL, BHEL, banks, defence, etc. Withdraw ill-conceived disinvestment & privatisation policy. We must not allow treasures of our nation to be transformed into BJP party's personal assets," Banerjee added.

Agitating farmers had on Wednesday demanded that the Centre convene a special session of Parliament and repeal the new farm laws as they threatened to block other roads in Delhi and "take more steps" if it failed to do so. 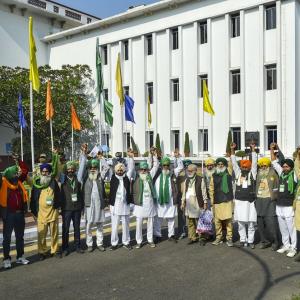