Away from the comfort of their homes and undeterred by the winter chill, farmers camping at Delhi's Singhu border against the Centre's agriculture reform laws say they are prepared for a long haul and will not leave until their demands are met. 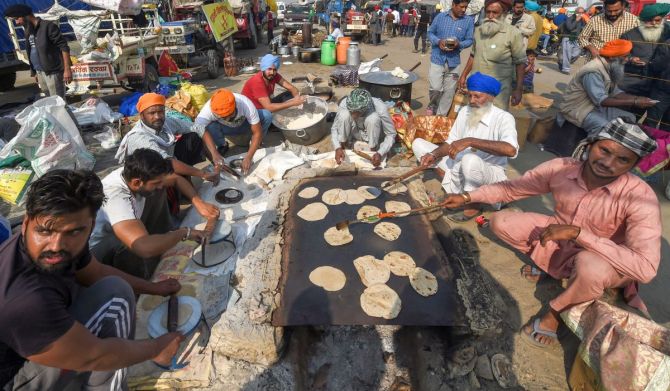 The farmers, who have come from the neighbouring states of Punjab and Haryana, start their day with a bath at petrol pumps, where they also wash their clothes.

They return the favour by cleaning the petrol pumps.

Then they cook on the roadside. Anyone visiting the protest site is also offered a wholesome meal which includes dal, rice, paranthas and kheer on different days.

A continuous supply of tea helps the protesters brave the cold weather conditions. Before they retire for the day, they gather in groups, singing songs and playing drums to keep their spirits high.

A protester, Sonu Kumar, said, "We came here on Tuesday and will stay till our demands are accepted by the central government. We have enough ration to stay here for months."

"Everyone is making their own food and distributing to others. We are Punjabis and know how to stay happy even in difficult situations. We are also getting help from locals. They are providing us water and other necessities," he said.

The protesters start preparing 'langar' every morning and food is distributed throughout the day.

"Different dishes are being made, including dal, paranthas, rice and kheer. Tea is also being served to people," another protester said. 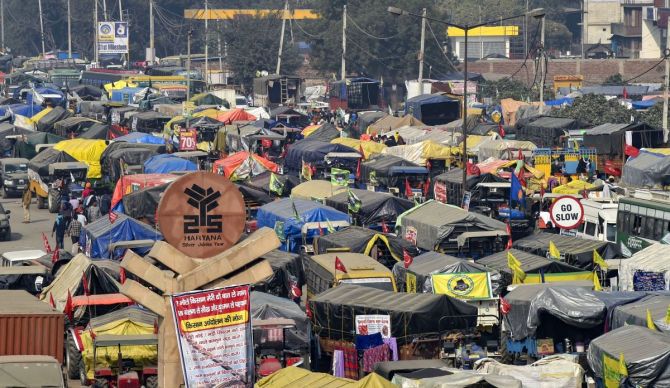 Medical camps have also been set up at Singhu border for protesters who are sleeping on roads under the open sky, in or under their tractors.

Dr. Vimal Sharma said, "As they are walking a lot so they get wounds in their legs. Many have gastric issues. Joint pain is also very common. Those who are sleeping outside their tractors are complaining of fever or cold."

Dr. Sukhwinder Singh Brar from Chandigarh said, "The protesters have different issues. Most of them are suffering from pain in legs due to old age."

The blood pressure of the elderly people is also being monitored.

The number of protesters swelled at Delhi border points on Wednesday. Police stepped up security after thousands blocked key gateways into the national capital for the seventh day on the trot, leaving commuters facing a harrowing time. 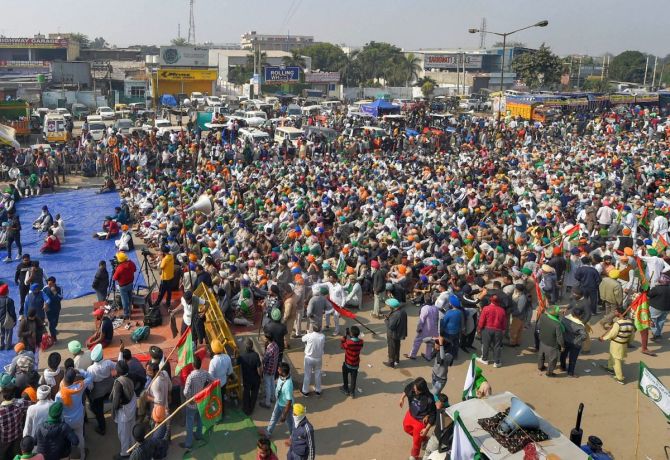 Among the five border points blocked are Singhu, the main access point for those entering Delhi from Punjab, Tikri, Ghazipur and Chilla.

The protest at the Delhi-Uttar Pradesh border in Ghazipur intensified, leading to the closure of a key route connecting the national capital with Uttar Pradesh.

At the Chilla Border, which connects Delhi with Noida, more farmers from Firozabad, Meerut, Noida and Etawah started gathering, prompting the authorities to close the key road stretch for the second consecutive day.

Farmer unions say the three new laws will lead to the dismantling of the minimum support price system, leaving farmers at the mercy of corporate houses.

But the government says the MSP system will continue and the new laws will give farmers more options to sell their crop. 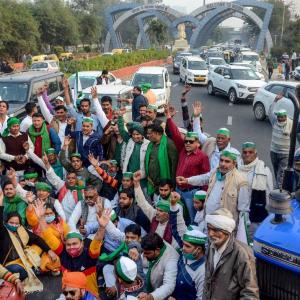