Over a week after the Shiv Sena lawmakers led by Eknath Shinde raised the banner of revolt against the party, Maharashtra Governor Bhagat Singh Koshyari has asked the Uddhav Thackeray-led Maha Vikas Aghadi (MVA) government to take a floor test on Thursday, although the Sena approached the Supreme Court challenging the direction. 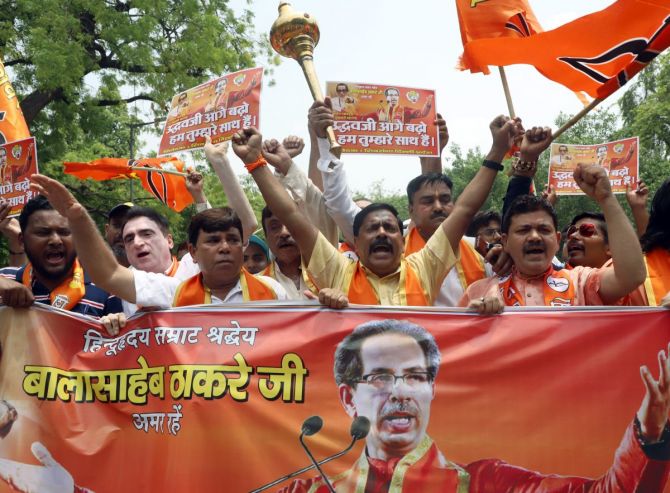 The letter was issued by Koshyari to Maharashtra Legislature's Principal Secretary Rajendra Bhagwat on Tuesday night, after a group of Bharatiya Janata Party leaders, including former chief minister Devendra Fadnavis, met him at the Raj Bhavan and urged him to direct the government to prove its majority in the wake of the Sena MLAs' rebellion.

However, the Shiv Sena on Wednesday approached the Supreme Court against the Governor's direction.

The apex court is set to hear the plea at 5 pm.

In his letter, Koshyari said, 'A special session of the Maharashtra Vidhan Sabha (Legislative Assembly) shall be summoned on June 30 (Thursday) at 11 am with the only agenda of a trust vote against the chief minister, and the proceedings shall be concluded in any case by 5 pm.'

'The proceedings of the House shall be telecast live and appropriate arrangements for the same shall be made,' he said.

In the letter, the governor cited an e-mail sent by seven independent MLAs on Tuesday, in which they said that the Maharashtra chief minister has lost the confidence of the majority on the floor of the House, thereby making it imperative to conduct a floor test at the earliest.

He also asked the Assembly administration to undertake necessary measures to ensure that the floor test is conducted in a transparent manner.

'The floor test shall be conducted by asking members to rise in their seats for the purpose of counting votes. Entire proceedings of the trust vote shall be videographed through an independent agency and shall be submitted to me,' the Governor's letter said.

He also made it clear that the proceedings of the House, including voting, be necessarily concluded on Thursday without adjourning for any reasons.

'The violence in Mumbai and other parts of Maharashtra against some of the 39 MLAs, with instances including breaking their offices, pose a threat to their lives and their family members. It is imperative to ensure that government continues to function with confidence of the house,' Koshyari said.

'I have issued a communication to the chief minister, calling upon to prove his majority on the floor of the house on Thursday,' the letter said.

Koshyari said that considering the provocative statements made by certain leaders, adequate security shall be deployed outside and inside the Vidhan Bhavan to maintain the sanctity of the voting process and also to preempt any law and order situation which may arise.

According to police, as many as 18 districts in Maharashtra, the police have registered cases of vandalism, sloganeering and similar activities against some persons.

The offices of some Shiv Sena MLAs, who were camping in Guwahati with rebel leader Eknath Shinde, were attacked allegedly by Thackeray loyalists.

Shinde on Wednesday said he will reach Mumbai on Thursday for the floor test against the beleaguered Uddhav Thackeray-led Sena-NCP-Congress government in Maharashtra. 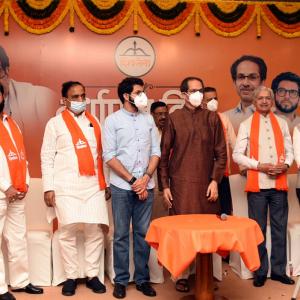