LS proceedings washed out for another day over farmers' stir

Lok Sabha proceedings were a virtual washout on Friday as relentless protest by Opposition members against the Centre's three farm laws continued for the fourth consecutive day, even as signs emerged that normal functioning could resume from Monday. 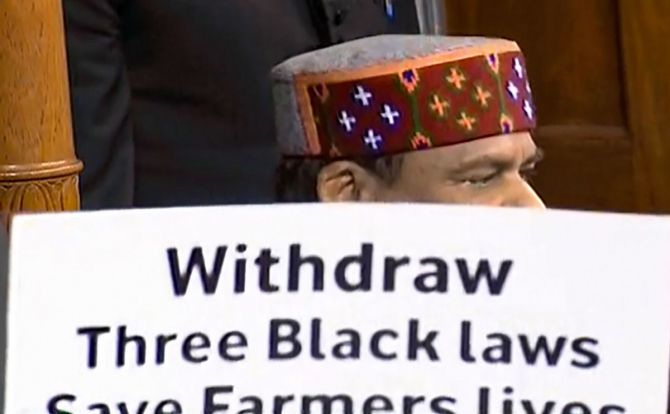 IMAGE: A placard near the chair of Speaker Om Birla in the Lok Sabha during ongoing budget session of Parliament in New Delhi.

The government has always been ready for discussion and we are hopeful that Lok Sabha will function smoothly from Monday, Parliamentary Affairs Minister

On February 3, Locket Chatterjee of the Bharatiya Janata Party had initiated the discussion on the Motion of Thanks but she could not complete her speech due to disruptions.

She has not yet resumed her speech.

On Friday, Lok Sabha was adjourned first till 6 pm after Opposition members disrupted the proceedings demanding repeal of the laws and shouted slogans from the Well of the House.

As soon as the House convened at 4 PM, members from the Congress, Left parties and the Dravida Munnetra Kazhagam rushed to the Well raising slogans against the new agri laws and holding placards.

As Opposition members continued to raise slogans, Birla appealed to them to participate in the Question Hour as an important issue related to vaccination was being discussed.

While Congress, DMK and Left members were in the Well, members from the TMC did not participate in raising slogans. Trinamool Congress members remained seated on their benches.

With no letup in the protests when the House reconvened in the evening, the Speaker adjourned its proceedings till Monday after his plea to opposition members to go back to their seats went unheeded. 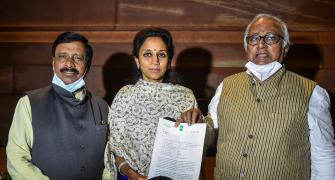 Oppn MPs not allowed to meet farmers; write to Speaker 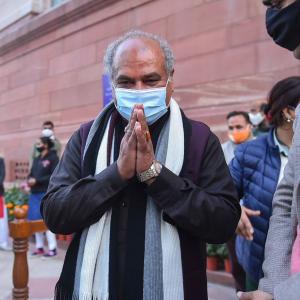