'The role of Parliament is to hold the government of the day, whichever party is in power, accountable for its actions, policies.'
'The amount we are wasting on Parliament is a very miniscule amount. But the cost of delay in policy-making is huge and that affects the entire nation.' 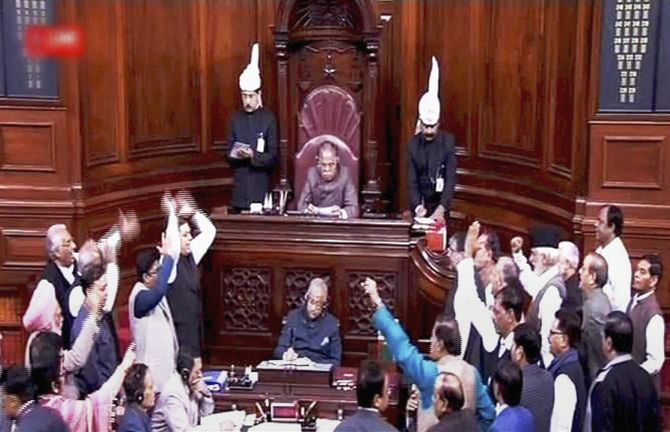 IMAGE: A television grab of members protesting in the Rajya Sabha during the winter session of Parliament.

According to PRS Legislative Research, more than 80% of productive time was washed out because of the demonetisation chaos during the winter session of Parliament.

What is the role of Parliament in a democracy and what do Parliamentary washouts mean for India?

What is Parliament for? Why do we have Parliament?

The core thing about Parliament is its members represent Indian citizens.

On behalf of citizens the MPs have been authorised to discuss, debate bills, etc, that the government (or any private member) introduces, examine it carefully, and reach at the best option available to enact the best laws for the citizens and the country.

There could be contending interests, conflicting objectives, but the role of MPs is to debate these issues and reach at the best possible ways to make laws.

Even more important role of Parliament is to hold the government of the day, whichever party is in power, accountable for its actions, policies, etc.

By asking them questions, seeking answers and putting everything in public domain and Parliamentary records are preserved for posterity.

The whole idea of this process is that you are arguing, trying to convince others about your point of view and if somebody else has a better point of view then they might convince you while you discuss and debate and find a way to enact best laws.

Parliament is a forum for these processes.

At a different level these processes provide legitimacy in the minds of people about democracy and the trust on which it works.

Out of various pillars of the State like judiciary, executive, bureaucracy and legislature, only the legislature is elected directly by the people.

People think that this is a system that is fair, visible, and is very responsive to their needs and demands and that is why any democracy works. This is the core basis of Parliament.

Given a spate of Parliament washouts during UPA II as well as during the 16th Lok Sabha, do you think Parliamentary legitimacy is getting eroded in so far as how Indians have begun looking at it?

If you see the way the judiciary has been acting in many ways lately... for example there is some part of the executive which is not functioning properly.

Let us say, laws on food security. In this case, people go to the judiciary, but this law-making has nothing to do with the judiciary.

It is the duty of the executive to make laws; the judiciary should act only if fundamental rights are at stake or essentially there are issues about Constitutional interpretation of laws.

The role of holding the executive to account for its action or its policies is usually in almost any other country is not the domain of the judiciary. It is the legislature that does that.

They don't petition Parliament; they petition the judges because the public expectation is the judiciary will solve their problems more than the laws of Parliament.

But there is tremendous public faith in this country in electoral politics which can be seen from the voter turnouts during general elections.

On this count we are doing better than mature democracies like the US or Europe where the voter turnout is more or less around 50 per cent.

Is there a way whereby people can make their elected representative accountable to how they act in Parliament especially when Parliament is in session?

It takes away the individual freedom from MPs on any vote. But you (the people) have voted for the MP; that MP is supposed to respond to your needs and also to her/his conscience. Not according to her/his party boss or high commands because s/he is a people's representative.

If you look at the British parliament or the American senate all votes are recorded.

If you saw the presidential debates, Hillary Clinton, who used to be a senator, people ask her why she voted in a particular manner in the senate.

You can't ask that in India because your vote is not recorded; it is done by voice vote.

The media too has a big role to play; I am not blaming the media, because if there is information, the media will put out that information for the benefit of the people.

That will help people assess parliamentary performance of their representatives and put further pressure on their elected MPs and MLAs.

What is the cost to the exchequer when a Parliamentary session is washed out?

(That is) very difficult to estimate. I will not use any number because any number would sound silly and the numbers that people put out in terms of money wasted.

Let us look at it this way.

Let us say there is an important higher education reform pending Parliamentary approval and (because of Parliamentary washouts) that is delayed by a year.

There are two crore (20 million0 careers affected in this country because of this one-year delay.

Like, GST could have been passed four years ago. And if you believe that the passage of GST will have added 1% to India's GDP then in the last four years we have lost 4% of GDP.

If you are not doing judicial reforms through Parliament, then the delivery of justice is getting affected.

How do you estimate this loss in terms of money?

The point is the amount (in money terms) we are wasting on Parliament is a very miniscule amount. But the cost of delay in policy-making is huge and that affects the entire nation.

How many bills couldn't be passed in the winter session of Parliament because it has now turned out to be a washout? 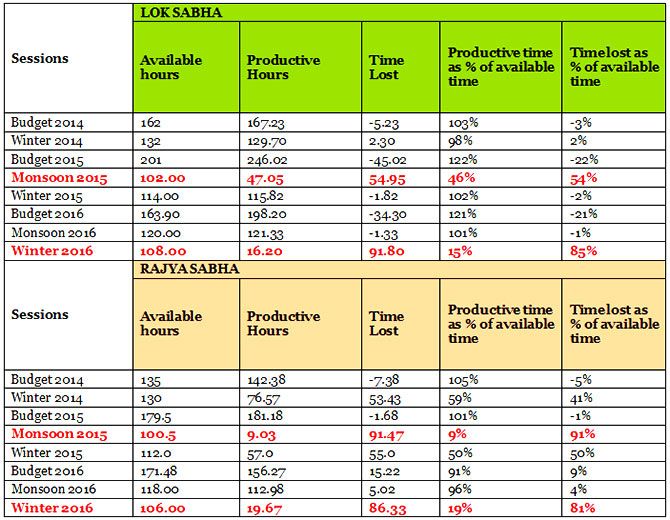 Not too many bills were listed in this session. But take the case of the Disabilities Bill (2014). The Rajya Sabha has passed it and the Lok Sabha will probably pass it too.

Then there was the Income Tax (Amendment) Bill that was passed after the demonetisation move, which was passed by a voice vote amid noise, and you saw there were MPs who wanted to move amendments but were not allowed to do that because the bill was not passed in the most Parliamentary manner.

I think while doing so you need to have discussions because they play an important role.

Let us say somebody files a petition in a court over the Constitutionality of a law. It is the role of the Supreme Court and high courts to interpret the law.

There may be some ambiguity in the way a law is framed. That is when interpretation comes into the picture.

And when one realises that that particular law was passed without much discussion and debate, then it proves to be very harmful for the country.

There were about 10 to 12 bills that were lined up for enactment into laws.

How many Parliamentary sessions have been washed out after Narendra Modi became prime minister?

It depends upon what you mean by washed out.

Like there was no business transacted when the Parliament was in session?

That is zero except the last time in December 2010 (during the UPA II rule) when they (the Opposition) wanted a Joint Parliamentary Committee to probe the 2G spectrum scam, which was possibly the worst session we have had.

After this government came in, the monsoon session (see the table above) last year was a particularly bad session. There were bills passed, but most of the time was lost because there was lot of din over the Vyapam scam and the Lalit Modi issue.

When was the last time that Parliament passed a significant law without much disruption and chaos?

The GST (Constitutional Amendment) Bill comes immediately to my mind.

It is not that there is no serious, intelligent, meaningful debate in our Parliament. But this particular (winter) session was a huge disappointment.

The quality of discussion during the passage of the GST Bill was as good as it gets in terms of the quality of debate and counter debates.

Also, there was detailed debate for Aadhar. There are many more, but these two debates in 2016 come immediately to my mind.