LS adjourns twice after ruckus over decision to extend session 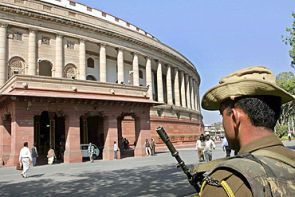 The Lok Sabha was adjourned twice on Friday as a joint opposition took on the government for its decision to extend the session by three days, terming the move ‘authoritarian’.

As soon as the House met for the day, the opposition pointed to the decision to extend the Lok Sabha by three days, protesting that they were not consulted.

Raising slogans such as 'tanashahi nahin chalegi' (authoritarianism will not be tolerated) and 'Modi sarkar jawab do' (Modi govt explain), members from the Congress, the Left and the Trinamool Congress rushed to the Well.

Citing rules, Congress leader Mallikarjun Kharge demanded the intervention of the Speaker. As per the original schedule, the Lok Sabha was to adjourn on Friday. The cabinet committee on parliamentary affairs had on Thursday decided to extend the session by three more days.

In the din, Kirit Somaiya (the Bharatiya Janata Party) referred to Congress Vice President Rahul Gandhi's remarks in the House on Thursday in which he blamed Prime Minister Narendra Modi for a decision not to proceed with a food park plan in his Amethi constituency.

Though not much could be heard in the din, he said the decision not to go ahead with the project was that of the company and not the government. He said he has moved a privilege motion against Rahul for allegedly misleading the House on the food park issue.

Somaiya and some other BJP members raised slogans demanding an apology by Rahul, who was not present. Food Processing Minister Harsimrat Kaur Badal was seen showing some documents to the BJP members.

As the slogans and counter-slogans continued, Speaker Sumitra Mahajan adjourned the House for 15 minutes at 1115 hours when the question hour was underway. Her repeated pleas to members to listen to the Minister in charge of Ministry of Ayurveda, Yoga and Naturopathy, Unani, Siddha and Homoeopathy -- Sripad Naik, on naturopathy went unheeded.

After the House resumed at 11.30 am, opposition members were on their feet again seeking to know whether the House has been extended and around 20 of them trooped into the Well.

In between, two questions were taken up but as the ruckus continued, the House was again adjourned till 1200 pm. Opposition members were heard shouting slogans such as 'Modi sarkar hosh me aao' (Modi government, come to your senses).