14 K'taka rebel MLAs disqualified by speaker ahead of trust vote

With the disqualification of 17 rebel MLAs -- 14 from the Congress and three from JDS -- on Sunday, the effective strength of the 224-member Karnataka assembly excluding the speaker, who has a casting vote in case of a tie, is 207. The magic figure required will be 104. 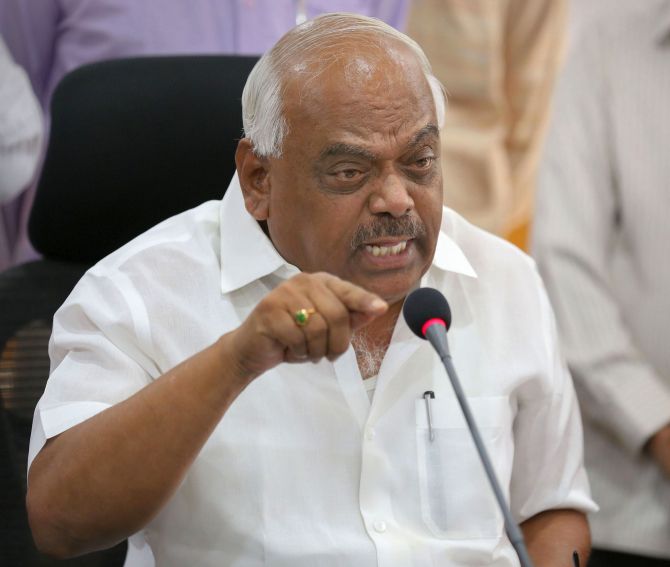 Karnataka assembly speaker K R Ramesh Kumar on Sunday disqualified 14 more rebel MLAs under the anti-defection law, an action that reduces the majority mark in the assembly and paves the way for the newly formed Bharatiya Janata Party government to win the trust vote smoothly on Monday.

Eleven Congress MLAs and three JDS lawmakers faced the axe from the speaker in addition to the three disqualified earlier, bringing down the majority mark to 104, one less than the current strength of 105 of the BJP, which also enjoys the support of an Independent.

Chief Minister B S Yediyurappa, who is set to seek the trust vote in the assembly, struck a confident note, saying "On Monday hundred per cent I will prove the majority."

Kumar pronounced his ruling at a hurriedly called news conference on the eve of the trust vote, two days after Yediyurappa took the oath as chief minister but the rebels said they would challenge it in the Supreme Court.

He rejected the resignations tendered by the MLAs and went on to disqualify them, allowing petitions by the two parties.

With the disqualification of 17 rebel MLAs -- 14 from the Congress and three from the JDS till the end of the current term in 2023 -- on Sunday, the effective strength of the 224-member assembly excluding the speaker who has a casting vote in case of a tie, is 207.

The magic figure required for majority is 104.

The BJP along with the support of one independent has 106 members, the Congress 66 (including nominated), JD-S 34 and one Bahujan Samaj Party member, who has been expelled by the party for not voting for the Kumaraswamy government during the trust vote on July 23.

The absence of 20 MLAS -- 17 rebels, as also one each legislator from the Congress, the BSP and Independent -- during the vote of confidence motion moved by the Congress-JDS coalition government headed by H D Kumaraswamy had led to its collapse.

"I have used my judicial conscience...," said the speaker, justifying his controversial action.

His sudden move also came amid indications from the BJP that it was mulling moving a no-confidence against him if he doesn't voluntarily give up the post when the assembly meets on Monday.

Ahead of the trial of strength, a confident Yediyurappa said the Finance Bill would be passed after winning the trust vote, adding, "I have not even changed a comma or full stop in it. I will be tabling the finance bill prepared by the (previous) Congress-JDS government."

The finance bill (appropriation bill) needs to be passed "urgently", as otherwise "we will not be able to draw funds even to pay salaries (of government employees)," he said.

The speaker said he took action based on the petitions moved by the Congress and JDS to disqualify the rebel MLAs, who had also submitted resignations as assembly members and were absent during the trust vote sought by Kumaraswamy.

Kumar said he had rejected the request by the rebel MLAs to give him four weeks more to appear before him on the issues of their resignations and disqualification plea against them.

The speaker had made it clear when he disqualified three rebel MLAs earlier that a member disqualified under the anti-defection law cannot contest or get elected till the end of the term of the present House, a contention which has been challenged by the BJP, rebel MLAs and several legal experts.

Reading out the names of errant MLAs, the speaker said, "they cease to be MLAs with immediate effect till the expiry of the 15th assembly (in 2023)," adding, "with responsibility and fear I have taken this decision."

"The way I am being pressurised mentally as speaker to deal with all these things, I am pushed into a sea of depression,' said an emotional Kumar.

Other party MLAs Ramesh Jarkiholi, Mahesh Kumatalli and Shankar were disqualified on Thursday.

JD-S members who faced action are: Gopalaiah, A H Vishwanath and Narayana Gowda.

Disqualified rebel MLAs, many of whom are still holed up in Mumbai fearing poaching from the Congress-JDS, said they will challenge the action against them in the Supreme Court.

"Dear voters and my well wishers, Speaker has ordered my disqualification from the assembly.there is no need to panic, we are challenging this in the Supreme Court. I'm confident that we will be victorious in the court," Maski MLA Pratap Gowda Patil said in a video message to voters.

Speaking to a local news channel, another disqualified MLA Munirathana said, they were aware that they will be disqualified as Congress leaders had threatened them about it.

"...our own party leaders had said, we will disqualify if you if go out.we are not small children or we have notgone out without their knowledge," he said, adding they will face it legally.

Alleging that many Congress leaders wanted this coalition ministry to go, Munirathna said leaders within the party did not even cooperate with Kumaraswamy to run the government smoothly.

"They (Congress leaders) are playing a game now, to show that they were loyal to the JD-S. We will reveal everything to people in coming days," he added.

The BJP slammed the speaker's action, calling it "unfair and violative of the law" which, it said, had been taken "yielding to the pressure from a party".

"It is a motivated and defective order," said senior BJP leader Govind Karjol, adding, the rebels would challenge it in the Supreme Court, where they were certain to "get justice."

The MLAs had quit on their own and their resignations should have been accepted, Karjol said.

The Karnataka Congress welcomed the speaker's decision to disqualify the rebel MLAs.

"The court of the public will also give the appropriate punishment to these legislators who have betrayed their parties and people who voted them by joining hands with BJP to bring down the coalition government," the party tweeted.

Congress Legislature Party leader Siddarmaiah, in a tweet, termed the speaker's decision as "a victory for democracy".

The JD-S too, in a tweet, welcoming the speaker's decision, said, "the speaker has sent a strong message to those who tried to uproot democracy by disqualifying legislators who fell for allurements of power and money, disregarded public mandate and violated the party whip."

The speaker justified his pronouncing the order swiftly just a day before the session, saying he had do it in view of the assembly meeting on Monday, where the "specific agenda" was to take up the motion of confidence and pass the crucial appropriation bill.

On the move by the BJP to subject him to the no-confidence motion, the speaker said, "let it come. You will see how I will behave. I will be in the chair...I will discharge my duties...let's see what happens.."

On the disqualification issue, he said, "this cannot be a drama and manipulation" and asserted that he had conducted himself in a "gentlemanly manner" in dealing with the matter.

A bench headed by Chief Justice Ranjan Gogoi in its order had given the assembly speaker the freedom to decide on the resignation of the 15 MLAs within such time-frame as considered appropriate by him after they approached the court.

It had also ruled that the rebel MLAs cannot be compelled to attend the assembly proceedings.

76-year old Yediyurappa was sworn in as chief minister for a fourth time on Friday in a sudden twist to the protracted high voltage political drama with a big challenge to manage numbers staring him in the face.

Shortly after taking the oath, Yediyurappa had said he would move a motion of confidence in the assembly on July 29 to prove his majority.

He took the oath, two days after the Congress-JDS coalition government crumbled under the weight of a rebellion its MLAs, 20 of whom were absent for the voting that led to the defeat of its trust vote by 99-105. 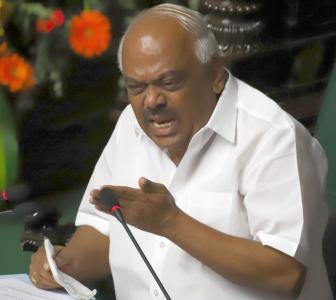 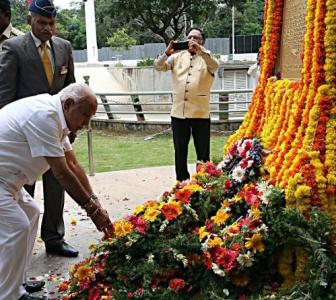