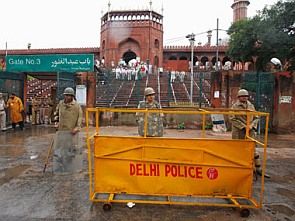 Indian Mujahideen terrorist Ejaz Sheikh, wanted in several cases including a terror strike in Jama Masjid in Delhi, was arrested on Friday night from Saharanpur area of western Uttar Pradesh by the Special Cell of Delhi Police.

Sheikh is a resident of Pune. He is considered a "technical expert" and a key member of Indian Mujahideen. He had been absconding since long and was apprehended by team of Special Cell last night following a specific tip off.

The arrest of Sheikh is yet another major setback to IM in the last two years.

In March this year, Tehseen Akhtar alias Monu, the India operations chief of Indian Mujahideen (IM) was arrested from Indo-Nepal border by the Special Cell.

His arrest had come days after the same unit of Delhi Police had nabbed another top IM operative Zia Ur Rehman alias Waqas from Ajmer in Rajasthan along with three of his associates.

One of the most wanted terrorist of the country, Ahmad Siddhibappa Zarar alias Yasin Bhatkal and his key associate Asadullah Akhtar alias Haddi were arrested from Indo-Nepal border last year.