In an apparent bid to reach out to Dalit voters, Aam Aadmi Party national convener Arvind Kejriwal on Friday urged people to remember Dr Bhim Rao Ambedkar while voting in next month's assembly polls and said he "worships" the leader. 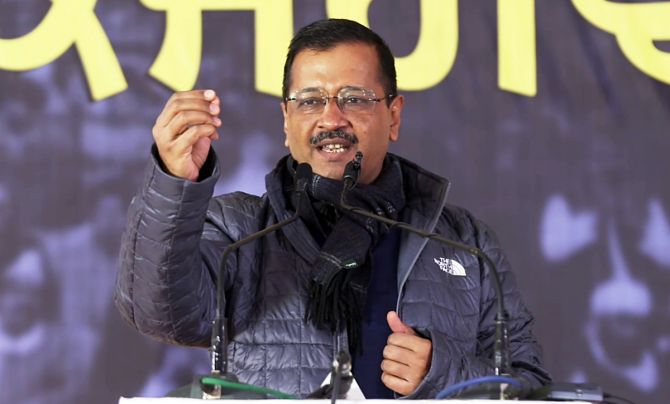 Addressing a public meeting in Phillaur, he urged the people to choose an honest government while accusing both the Shiromani Akali Dal and the Congress of looting the state turn-by-turn in the past.

Phillaur is part of the Doaba region, having a sizeable population of the Scheduled Caste community.

Kejriwal also promised to fulfil the Dalit icon's dream of providing quality education to children if his party is voted to power in the February 20 Punjab assembly polls.

"I am a big fan, a big follower of Babasaheb B R Ambedkar. I worship him. Coming generations will not believe that such a great person was born on this planet," he said, adding that he has recently announced that Bhimrao Ambedkar and Bhagat Singh's portraits be kept in all Delhi government offices.

He called upon the people to visualise the Dalit icon while going to polling booths to cast their vote.

"Ask yourself if Babasaheb was alive, then what would have he done while voting," said Kejriwal.

"Ask yourself what would Babasaheb have done in such a situation. He would have definitely voted for an honest candidate. Bring the picture of Babasaheb in your mind and vote for the honest candidate," Kejriwal said.

He told people that they had given 26 years to the Congress and 19 years to the Badal family-led Shiromani Akali Dal in Punjab.

"Both parties have looted Punjab. Now give just five years to the Kejriwal-Mann pair and we will usher in prosperity in Punjab," he said.

Claiming that the next month's polls are not ordinary elections, Kejriwal said earlier there used to be no alternative but now people have an ”honest” party.

"This turn-by-turn loot continued for years. Now, vote for AAP and its CM face. Mann is a kattar imaandar aadmi (die-hard honest man), who has not got even a penny from anyone in his life," the Delhi CM added.

Kejriwal said people of Delhi gave them a chance and they shaped the city as per "dreams of Babasaheb by doing good work on education, health and other areas".

"Now give just one chance to us in Punjab for five years and we will bail out the state from its current morass," he promised.

Kejriwal said, "We have given tickets to honest people and an honest government will come to power."

Seeking to stress upon the clean image of AAP's CM face Bhagwant Mann, Kejriwal said the Sangrur MP has been parliamentarian for the past seven years.

If anyone becomes an MLA in Punjab, in five years, you will see him acquiring property, cars and other assets, he said.

"For seven years Mann has been an MP and he still lives in a rented house. Punjab's biggest need today is to have a staunch honest person as CM and an honest government," he said.

He referred to the recent Enforcement Directorate raids in the state and said crores of rupees were recovered from the Punjab chief minister's relative.

He asked people to listen to their conscience.