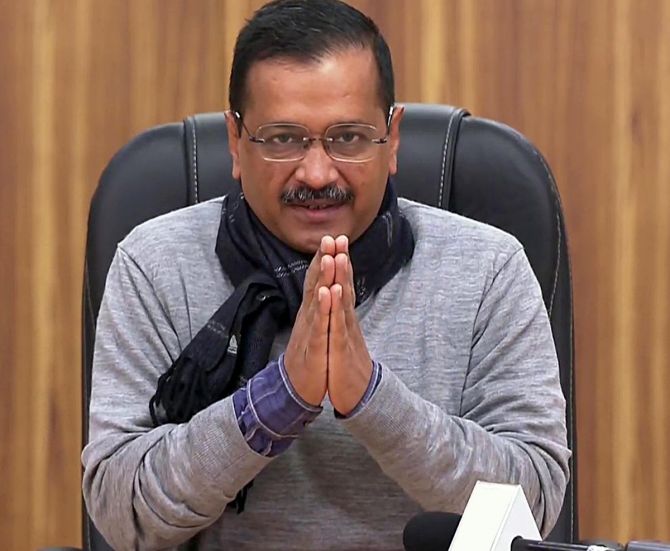 The Delhi chief minister said his government has done a number of good works such as providing free electricity and water, and urged Delhiites to also share their videos personally with their acquaintances in Punjab, Uttar Pradesh, Goa and Uttarakhand, and appealed to voters in the poll-bound states to give the AAP a chance.

Launching the 'Ek Mauka Kejriwal Ko' (one chance to Kejriwal) campaign, he also asked the AAP volunteers to ensure maximum sharing of such videos and 'make them viral' on social media platforms.

Kejriwal promised to meet and dine with the creators of top 50 videos after the elections.

The AAP is contesting on all seats in the Assembly polls to be held in Punjab, Uttar Pradesh, Goa and Uttarakhand.

"Make videos on good works of Delhi government telling how you benefitted, and share them on Twitter, Instagram Facebook, Whatsapp, etc., appealing to people to give one chance to Kejriwal if they want similar good works in their states too," the AAP national convenor said.

"Also, WhatsApp your videos to people known to you in these states appealing them to give a chance to Kejriwal," he said.

"After elections, I will meet and have dinner with the creators of such top 50 videos."

Urging Delhiites to help drive his party's campaign in the poll-bound states, Kejriwal said he does not have 'crores of money' to spend on elections as he has worked 'very honestly' while being at the helm of affairs in the Delhi government.

"I have worked very honestly. That's why I do not have crores of money to spend on elections. My biggest asset is you. There is so much power in your voice. If you spend some time, people of other states will listen (to you) and it will go a long way," he said.

Kejriwal said the AAP government has done 'wonderful work' in Delhi in the past seven years.

"These works are today discussed all over the world. People from the United Nations came here to see Delhi's Mohalla clinic. The US President's wife came to see (government) schools in Delhi. All these good works we could do because you people of Delhi gave us a chance," he said.

People of Delhi gave a huge mandate to the AAP in the Assembly polls twice after they saw the work of the party's 49-day government in 2015, Kejriwal said.

"You are electing us again and again because you are very happy with us. Schools, hospitals, electricity, water, roads, we have given a lot of facilities to people of Delhi, fulfilled all of the promises that we made," he said.

Kejriwal assured similar works in other parts of the country if people give the AAP a chance. AAP offers free pilgrimage if it forms govt in Goa