A day after the resignation of over a dozen ruling Congress-Janata Dal Seular MLAs rocked the ruling coalition in Karnataka and plunged the state into a political crisis, both parties have gone into a huddle to discuss the next course of action to save the government. 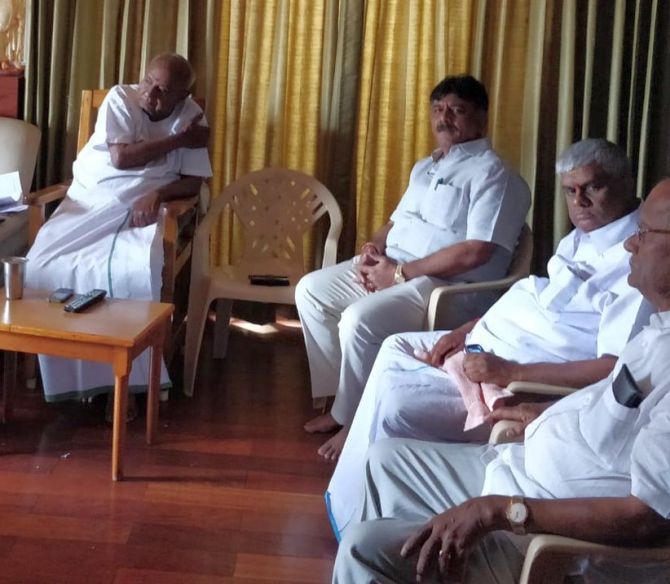 This comes even as opposition Bharatiya Janata Party said it is keeping a watch on the ongoing developments and indicated that the party was looking at options to form the government.

Rocked by the resignations of 10 of its MLAs, Congress Legislature Party leader Siddaramaiah has convened a meeting on Tuesday to discuss the ongoing political developments and the assembly session, starting from July 12.

In an intimation to Congress MLAs, he has warned that their absence would be viewed seriously.

The meeting gains significance amid reports that more legislators are likely to resign in the next couple of days.

Congress leaders, including All India Congress Committee general secretary K C Venugopal who has camped in Bengaluru, have been holding a series of meetings on Sunday and strategising the plan of action in a last ditch effort to save the government.

They are also trying to reach out to party MLAs who have resigned and trying to pacify them, sources said, adding that attempts are also being made to contact those whom they suspect are "vulnerable" and may resign.

Speaking to reporters, Shivakumar said meetings are going on and "we are trying find a medicine and solution" to the current crisis.

"I hope that everything will be resolved soon and am ready for any sacrifices to save the government and party."

Khandre said attempts are on to pacify MLAs and solve the issues that they have.

"We are trying to reach out to MLAs directly...there are some minor differences, which are normal. The leadership is trying to sort out them. Everything will be all right, wait and watch," he said.

The Congress' high command is said to have questioned state unit leaders about how they had allowed such a large number of them to happen, party sources said.

Meetings are also on in JD-S circles, at the residence of party patriarch Deve Gowda. "During the meeting at the JD-S supremos residence, the current political developments in the state were discussed... attempts are on to pacify and get three party MLAs to withdraw their resignations," he said.

Shivakumar,considered the Congress troubleshooter, met Gowda at his home and and discussed the ongoing developments.

The Congress-JDS government has plunged into a crisis, with 13 MLAs of the alliance submitting their resignation to the Speaker, 12 of them on Saturday.

Nine MLAs of the Congress and three of JD-S reached the speaker's office to put in their papers on Saturday and later met governor Vajubhai Vala at the Raj Bhavan.

Another Congress MLA, Anand Singh, submitted his resignation on July 1.

The ruling coalition, which has a strength of 118 in the 224-member assembly, faces the risk of losing its majority if the resignations are accepted.

Ten of the MLAs are now camping at a hotel in Mumbai.

The Congress has alleged that the BJP was facilitating their stay there in a bid to destabilize the government in Karnataka.

The Maharashtra BJP claimed on Sunday it was not aware of the presence of the MLAs in Mumbai, even as a saffron party leader was spotted at a hotel where the legislators are put up.

In Karnataka, Congress sources said a final shape to the party's plan of action was likely to be finalised once they meet the chief minister, including a cabinet reshuffle to make way for disgruntled MLAs by asking some loyalists of both parties to resign from the ministry.

Amid reports of talks about a change of guard as an option to save the government by making veteran Congress leader Mallikarjun Kharge the chief minister, Kharge himself ruled it out, saying "false" and "flimsy" information was being spread through the media ust to divide the party.

"I dont know about it. I want this alliance government to continue and go smoothly," he said, adding he would also talk to the MLAs to withdraw their resignations,

He charged the BJP with trying to destabilise the "non BJP" elected governments across the country.

Stating that attempts are on pacify the MLAs, Siddaramaiah alleged that BJP was behind all these, using power and money as allurements to lure the disgruntled MLAs.

However, seven time Congress MLA Ramalinga Reddy, who has resigned, said both Kumaraswamy and Venugopal spoke to him and he told them of the circumstances leading to his resignation.

"I was kind of pushed (by circumstances in the party) to resign....I have resigned as MLA, but not from Congress," he told reporters.

BJP state unit chief B S Yeddyurappa said the party was watching the political developments and that those in the party are not "sanyasis" to rule out the possibility of forming the government.

Ruling out the possibility of any mid-term polls, he said "it has been just 13 months after the assembly election. We will not allow election to happen.

"Let them (Congress-JDS) give good administration.If they can't, we are there with 105 MLAs strength...we will not meet the Governor or go to Delhi... we are watching developments," he said.

The JDS-Congress coalition's total strength, including those who have put in their papers, is 118 (Congress-78, JDS-37, BSP-1 and Independents-2), besides the speaker.

If the resignations are accepted, the coalition's tally will reduce to 105.

The speaker also has a vote. 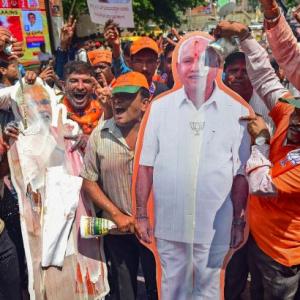