News
Business
Movies
Sports
Cricket
Get Ahead
Money Tips
Shopping
Sign in  |  Create a Rediffmail account
Rediff.com  » News » 'Karnataka will have a re-election within a year'

'The Congress must honour the mandate. The mandate is clearly for the BJP.' 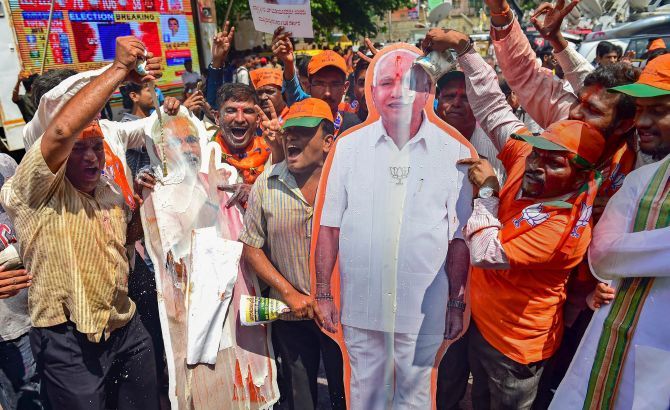 As Karnataka throws up a fractured mandate, the governor's role becomes crucial.

With both the Bharatiya Janata Party and the Janata Dal-Secular -- the latter party with Congress support -- staking a claim to form the government in Bengaluru, it remains to be seen whom Governor Vajubhai Rudabhai Vala will invite first to prove a majority in the 224-member assembly.

What must the governor do in Karnataka?

I feel the Congress must honour the mandate. The mandate is clearly for the BJP.

Constitutionally speaking, the governor has options.

If you see the recent past, the governor did not invite the single largest party in Manipur, Goa and Meghalaya (to form the government).

Now if he does not do that in Karnataka and calls the BJP to form the government, it will be called double standards.

Vajubhai Vala, Karnataka's governor, has been through and through a BJP person. He was with Narendra D Modi for many years in Gujarat.

If we have to consider the impartiality of the office of governor where there is an alliance of a majority (the Congress and JD-S) then the governor will have to go with that.

But I would still say the Congress and the JD-S are not doing great service to democracy (by staking a claim to form the government).

The Congress had criticised what happened in Goa, Manipur and Meghalaya. In an ideal situation they should not repeat those mistakes.

The BJP is short of a majority by eight seats.

What is the principle! A group which has a majority has to be invited.

If these two parties (the Congress and JD-S) have the numbers, then the governor will have a limited choice.

And if he delays it, the way the Tamil Nadu governor did not allow (V K) Sasikala to be sworn in, it will show a partisan attitude on the governor's behalf.

Politically speaking, this alliance of the Congress and JD-S does not show Indian democracy in good taste.

Both parties were fighting against each other. And just to exclude the BJP they formed an alliance.

It will not be considered a holy alliance.

I think it is not right because clearly the people of Karnataka want a BJP government.

But in the system we have, seats count and not vote share.

Technically speaking, the governor has a limited option.

If two parties together have crossed the half way mark, then he has to invite (them).

The Congress should also be criticised for stitching such an alliance.

Now, we are fighting in politics like we do in a war.

Let them form an alliance, but I am disappointed with it.

What does the Constitution say? Who should the governor invite to form the government?

The Constitution does not say who will be appointed prime minister or chief minister.

Even about the PM it is not written clearly in Articles 73 or 74, which say the PM will be appointed by the President and the governor will appoint the CM.

And we follow convention, which is if there is a clear majority for one party, then there is no discretion.

Even post-poll alliances can be taken into account. There has been all kinds of good traditions.

This kind of high moral ground is to be taken and such traditions must be followed by the Congress.

But then there have been instances of parties coming together to form a majority after the election and go to the governor.

They say, well, we have the numbers, invite us.

But what does the Constitution say? Does it say that the single largest party which is short of a majority must be given a chance to form the government?

The Constitution does not say anything like that. It does not say that the leader of the majority party will be invited.

It leaves it to the discretion of the governor to appoint the chief minister.

And the convention is that the governor asks the chief minister to prove his majority in the House.

If it is a clear simple majority, then there is no hurry, but in a tight situation like this, the governor may say okay, I give you one week or four days to prove your majority.

The Constitution does not mention even words like 'majority' or 'single largest party'. These words were not there in the Constitution.

In fact, the word 'party' came into the Constitution only in 1985 with (the anti-) defection law. That was the 52nd Amendment.

British parliamentary convention says the governor should appoint a person who has a clear majority.

If there is no clear majority, then maybe the single largest party or a group of people (different parties) who have come to form the majority.

Why did we not mention such things in our Constitution like the British did?

In the Constituent Assembly, it was suggested that the chief minister and prime minister should be elected by the newly elected House.

The governors and the President of India will have no say in it.

Let the new assembly meet after oath taking. The first agenda should be to elect the leader of the House. That would have been best.

Initially, the Constitution provided for an elected governor and now we have nominated governors who work largely as agents of the central government.

Congress governors were puppets and BJP governors are worse than those of the Congress.

As a student of the Constitution, I feel disappointed as whatever bad things the Congress was doing, the BJP has started doing the same.

The BJP stooped low in recent elections in Goa, Meghalaya and Manipur.

The Congress, rather than taking a position based on values by respecting the mandate, is coming up with this unholy alliance.

How will the BJP form a government? They don't have the numbers.

That is okay. They don't have the numbers, but what is happening now is that the Congress and the JD-S have come together to stake a claim.

The governor did not meet the JD-S leaders when they wanted to meet him.

That is what I am saying. The governor's office under the BJP has become a BJP party office, which is sad. This was our criticism about Congress governors. They were taking diktats from the Centre.

Now if the BJP behaves the same way, they are not a party with a difference.

Ideally, the governor must show courtesy and meet the leaders of the newly elected party.

If he does not invite them and gives a chance to the BJP and allows defections, sale and purchase of MLAs and some MLAs resign, then that will be a further onslaught on the Constitution.

Ideally, the single largest party should be allowed to form the government. These people should not have formed this alliance.

Still, they have formed an alliance and have the numbers. The governor should invite them.

If the Congress and JD-S had a pre-poll alliance, should the governor have invited them to form the government?

Then it would have been easier. I think it was (then President Dr) Shankar Dayal Sharma who said I will take a pre-poll alliance into account and not a post-poll alliance.

So you have all kind of contradictory precedents.

Once the number is there, whether it is a pre-poll or post-poll alliance, you don't have much of a choice because you cannot prevent a legislature from voting this way or that way in favour or against the government.

Any government that enjoys a majority has to be sworn in.

My expectation is that Karnataka will have elections within a year again.

Whichever government is formed, it will not survive for long.

Along with the Lok Sabha elections of 2019, you will see Karnataka assembly elections too.

Is democracy all about grabbing power?

The way we are polarising elections by bringing in religion and caste to elections, it is weakening Indian democracy.

(Look at) the way we are bringing the Indian Army into elections. Reference to the armed forces must not come in election campaigns. 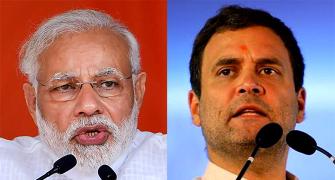 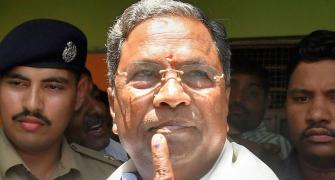