News
Business
Movies
Sports
Cricket
Get Ahead
Money Tips
Shopping
Sign in  |  Create a Rediffmail account
Rediff.com  » News » JD-U to go solo in UP polls after no response from BJP

With the Bharatiya Janata Party cold to its alliance proposal for the Uttar Pradesh assembly polls, the Janata Dal-United on Saturday announced a list of 26 seats from where it will contest and said the party will field its candidates in at least 51 constituencies. Addressing a press conference, JD-U president Lalan Singh lamented that his party would have fought the Uttar Pradesh polls with more strength and on more seats if it had not waited so long after Union Minister R C P Singh, the regional party's nominee in the central government, had initially conveyed that the BJP was agreeable to an alliance.

He repeatedly mentioned that it was R C P Singh who was authorised by the JD-U leadership to speak to BJP leaders, and any other person was not part of it.

Lalan Singh said that his party waited for so long at the instance of the Union minister, and it was now going ahead with the decision to fight the polls independently after BJP president J P Nadda said publicly that his party's allies in Uttar Pradesh are Apna Dal and Nishad Party and made no mention of the JD-U.

R C P Singh was considered a close confidant of Bihar Chief Minister Nitish Kumar, the preeminent JD-U leader, but speculation has been rife about his falling stock in the party after he became the lone party member to be given a place in the Modi government.

He was then JD-U president and made way for Lalan Singh after becoming a Union minister.

Lalan Singh said his party has authorised its Uttar Pradesh chief Anoop Patel to name candidates and fight on more than 51 seats if he seems fit.

The list of Uttar Pradesh seats issued by Lalan Singh include Rohaniya, which falls in the Varanasi Lok Sabha seat represented by Prime Minister Narendra Modi.

The JD-U president, however, insisted that his party's decision to fight the polls independently will have no impact on its ties with the BJP in Bihar.

The JD-U has fought separately in several state polls without allying with the BJP.

Lalan Singh said his party had won seven seats in Arunachal Pradesh in the last assembly polls and noted that the BJP wooed six of them into its fold later. 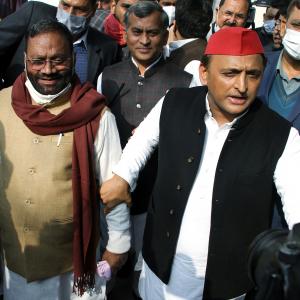