As Rajasthan waits for December 8 when counting of votes will take place to decide the fate of its Chief Minister Ashok Gehlot and his bete noire Bharatiya Janata Party's Vasundhra Raje among others, PB Chandra tries to gauge the mood in both the parties, especially after the exit poll results were announced. 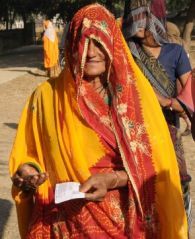 Exit polls that showed the Bharatiya Janata Party ahead of the Congress and heading for a clear majority should have warmed the hearts of the saffron party cadres.

But despite the exit poll’s favourable verdict, the predictions of soothsayers, the feedback given by the candidates and the opinion polls, there is an uneasy calm in the BJP headquarters at Jaipur’s Sardar Patel Road.

Since Monday candidates have been coming to Jaipur with their assessments wearing a broad smile. They all feel the record polling will be in their favour.

Speculators are doing brisk business based on the exit poll results and have put their money on the BJP forming the next government. There is more than Rs 200 crore involved in the satta (betting) market.

But the party’s leadership does not trust the exit poll fully. They feel the results on December 8 may paint a different picture. The 2007 exit polls in Uttar Pradesh is a classic example when predictions went wrong. Mayawati was given 140 odd seats in the exit polls but the Bahujan Samaj Party ended up with a simple majority.

Exit polls have predicted the Congress losing the electoral battle to the BJP. This was enough for the Congress leadership to issue a statement stating exit polls should not be trusted. The party on the other hand said that the verdict would be reversed in favour of the Congress on December 8.

Both the parties called their candidates for a review and there was more gloom in the Congress camp than in the BJP’s.

Congress candidates blamed the infighting and rebels as they came armed with documentary proof of how the party’s own cadre damaged their prospects. But they were all praise for the minority community that came in large numbers to vote. That was the only positive feedback.

Some BJP leaders were not fully convinced by the exit poll. They were in touch with likely Independents and rebel winners in case of a hung Assembly. The BJP is leaving nothing to chance and have reached out to all rebels and Independents who are likely to win.

They have already started an exercise to form the government with the help of the Independents and smaller parties.

The BSP has already indicated that it would not support the BJP in case of a hung Assembly and the party falls short of the magic figure of 101.

Polling in 199 constituencies was held but was adjourned in Churu constituency to December 13 following the death of BSP candidate Jagdish Meghwal.

Chief Minister Ashok Gehlot has rubbished all the exit polls and said the party was going to get a majority on its own.

Meanwhile, soothsayers are making a fast buck as candidates line up with horoscopes to know their fate.

“I have been saying for the past three months that the BJP is going to get 115-120 seats. My prediction will come true and Vasundhara Raje’s coronation for the second time is a certainty. I stick to my figures. The Congress will not be able to cross more than 62 seats,” said Akhilesh Sharma a noted astrologer.

Sharma had successfully predicted that Pratibha Patil would become the president of the country when she was the governor of Rajasthan.

Party cadres in both Congress and BJP offices discuss the other party’s poll strategies and also talk about their star campaigners. The Congress cadres while sipping tea outside the party’s office candidly admit that Rahul Gandhi is miles behind in oratory in comparison to Modi.

“Modi is like a political crusader who came and won the electoral battle for the BJP. What’s noticeable was in an Assembly election when local issues take precedence over national issues, Modi used the platform to attack the UPA government on its failure. He reminded people about inflation and price rise,” said Ashfaque Jaipuri, a Congress worker.

“The Congress government excelled with its social security schemes, free medicine, free diagnostic tests, pensions etc. but Modi was able to drive home the point that what the Congress gave the poor with its right hand it took back its benefits with its left due to price rise,” Jaipuri added.

“It is amazing that two days before the poll there was an increase of 50 paise in diesel. This could have been deferred. It seems the UPA government has gone mentally bankrupt,” he said.

The Congress, which bagged 97 seats in a House of 200 in 2008 while the BJP mustered 79 seats, was able to form the government because of the Independents and the BSP that lent support.

The chief minister is looking at a situation where he still can work some magic if he gets about 90 seats.

More than 50 rebels from both the Congress and the BJP, as well as candidates from about 10 smaller parties are on Gehlot’s radar in case there is a hung Assembly.

Gehlot feels that in at least 70 seats the contest is three-cornered. He is also keeping an eye on the Kirori Lal Meena party winners. The NPP’s patron, Kirori Lal Meena, is a sworn detractor of BJP state president Vasundhara Raje. Meena came into the election fray with the sole objective of defeating Vasundhara Raje and keeping her out of power.

But Meena may support the BJP in forming the government provided somebody else became chief minister.

Although he has been critical of both Gehlot and Raje in his election campaign, he would not oppose Gehlot. This is Gehlot’s only hope -- a hung Assembly. But if the Congress does not get 85-87 seats, a Congress led coalition government would become a distant dream.

“We are already on a strong footing. The exit poll figures may vary a little but it can’t put us on a mark that is below hundred. We are already 100 plus and the party will form the government,” said Jyoti Kiran, BJP spokesperson. 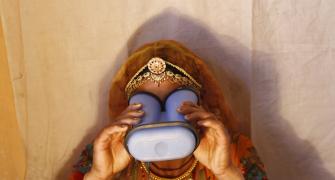 Modi mania or Gehlot's gifts: What will Rajasthan choose? 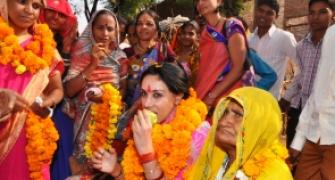 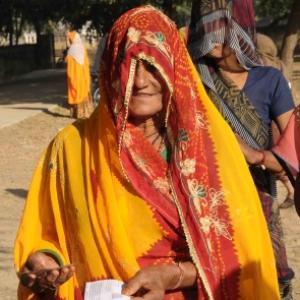 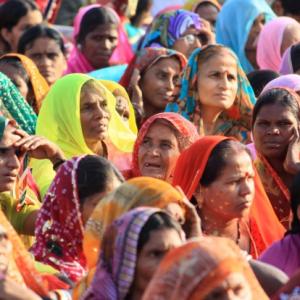 111 criminals and 346 crorepatis in Rajasthan polls