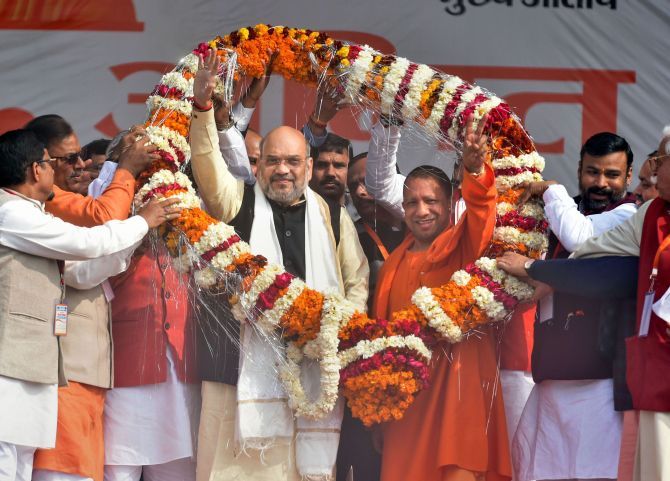 IMAGE: Union Home Minister Amit Shah and UP CM Yogi Adityanath being garlanded during a rally in support of CAA, in Lucknow, on Tuesday. Photograph: Nand Kumar/PTI Photo

Union Home Minister Amit Shah on Tuesday emphatically said the Citizenship Amendment Act (CAA) will not be withdrawn and those protesting can continue to do so even as he challenged opposition leaders for a public debate on the contentious law.

Addressing a rally in Lucknow in support of the CAA, Shah also declared that the construction of a Ram temple 'touching the skies' in Ayodhya will begin within three months.

At the same meeting, Uttar Pradesh Chief Minister Yogi Adityanath alleged that the Congress is shelling out money for 'arson' and protests over the CAA.

Shah accused the Congress of not implementing the suggestions that came from its own leaders in the past on granting citizenship to minority Hindus in Pakistan, Bangladesh (then East Pakistan) and Afghanistan after Partition.

Shah said there is no provision in the amended law for taking anyone's citizenship away.

"A canard is being spread against the CAA by the Congress, SP, BSP, and Trinamool Congress."

The CAA is a law to grant citizenship, he added.

"I want to say that irrespective of the protests it will not be withdrawn," he said, adding, "Whoever has to oppose can oppose the Act, it is not going to be revoked."

Stating that a myth is being spread in the country about the CAA, Shah alleged that riots and arson are being induced and that the SP, BSP, Congress and the TMC are fomenting the protests.

"If any clause of the CAA takes away the citizenship of anyone, including Muslims, they can tell me. The agitations and sit-ins, which are being organised in the country against it, are wrong," he said.

"The Congress has become blind due to vote bank politics," he said, and also blamed the party for Partition.

Reacting to the assertions by Shah, Akhilesh Yadav said they reflected intolerance as the Bharatiya Janata Party 'wants to crush people with the road roller of its majority'.

Lashing out at the BJP, the former chief minister alleged that the saffron party is making 'intolerance' as its identity.

'Playing with basic principles of the democracy, the BJP is going ahead with making intolerance its identity. Shah's statement that he would implement the CAA at any cost shows that the government wants to crush people with the road roller of its majority,' Yadav said in a statement.

The Uttar Pradesh unit of the Congress accused Shah of 'speaking the language of a dictator'.

'Virtually soaked in pride of being in power, the country's home minister is speaking the language of a dictator....' UP Congress chief Ajay Kumar Lallu said in a statement.

Shah asked opposition parties where they were when 'crores of people were killed' in Pakistan, Afghanistan and Bangladesh on the basis of religion.

He said five lakh Pandits were displaced from Kashmir, 'but these parties did not utter a word'.

"Now, because of PM Modi, a new chapter has begun in the lives of these people," he said.

Shah referred to the recent Supreme Court verdict that allows the construction of a Ram temple at the disputed Ayodhya site. The crowd cheered when he said the construction will begin in three months.

Accusing the opposition of speaking the language of Pakistan prime minister Imran Khan, the BJP leader said, "I don't know what relation they have with Khan."

On Mamata Banerjee, he charged, "She was demanding citizenship for Dalit Bengalis. Now when the citizenship is being given to them, she has problems."

Shah claimed that during the Rajasthan assembly elections, the Congress had advocated citizenship to Hindus from Pakistan. 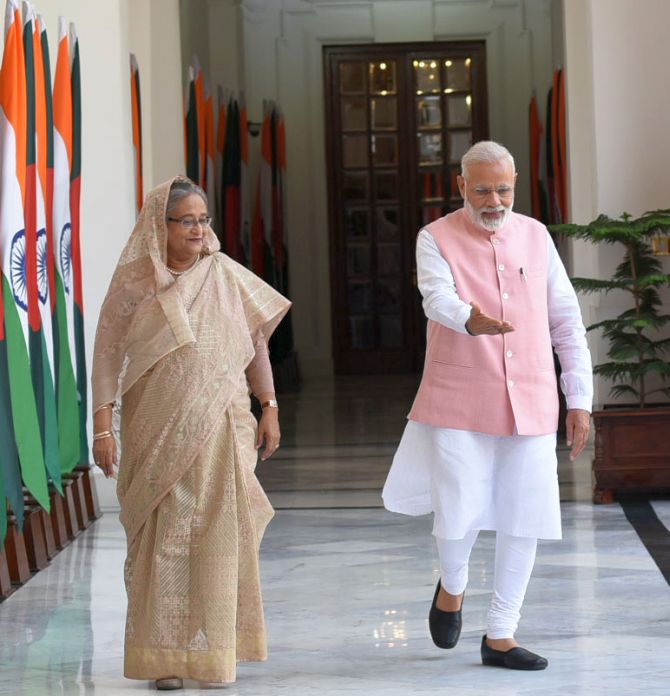