Prime Minister Narendra Modi on Friday accused the previous Congress government of failing to act after terror attacks in Mumbai, but said such a situation does not persist now as perpetrators now know they will be punished.

Addressing his last campaign rally for the October 21 Maharashtra assembly election, Modi also spoke of the economic reforms ushered in by the Bharatiya Janata Party-led Central and Maharashtra governments, which he said had no 'stain of corruption' on them.

Modi said during the Congress-led regimes, terror attacks and bomb blasts would take place in Mumbai 'any time' and its coastline had become 'entry point' for terrorists.

"That is not the situation now. Why? Because those who nurture terrorism now know they will be punished," Modi said.

He also referred to the surgical strike and Balakot air strike post terror attacks in Uri and Pulwama respectively as 'not mere words, but the policy of the BJP and its allies'.

"When evidence with probe agencies after the terror attacks pointed out to masterminds across the border, Congress leaders instead said the attacks were the handiwork of those in India," he said.

Attacking the Opposition, Modi said they 'nurtured' for decades Article 370, which gave a special status to Jammu and Kashmir.

He accused the Congress and its allies of playing politics of self-interest even as terrorism spread in Kashmir valley and people were deprived of their rights.

The prime minister also asked why it was so that when it came to giving justice to the victims of such violence, the Congress 'defended' terrorists.

Recalling the 1993 Mumbai blasts, Modi alleged the governments then did not do justice to the victims. Describing Mumbai as 'city of opportunities', Modi said Maharashtra Chief Minister Devendra Fadnavis has provided a stable government in the state unlike the previous Congress-NCP regime, which saw chief ministers often getting replaced.

Modi said the Fadnavis government focused on the city's growth unlike the previous 'corrupt' Congress-NCP governments.

"There is not even a single stain of corruption on our government. We are trying to fulfill dreams of all, from farmers to those launching start-ups. Most of the services have gone online, reducing corruption," Modi said.

The previous governments, Modi alleged, tried to fulfill dreams of the corrupt.

"On the other hand, the Fadnavis government is fast-tracking Maharashtra's development," Modi said and also rued only 11 km-long metro services were provided by the Congress-led governments in 16 years till 2014.

He also said those who ruined India's economy and banking system are in jail now.

"The cleanliness campaign has begun just now. More work will follow," he added.

Before reaching the rally, Modi tweeted the photograph of a saffron-coloured sky with the caption: Here's a photo of the spectacular sky while on the way to Mumbai. 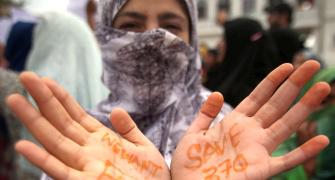