Internet shut in 10 districts of Assam for 24 hrs 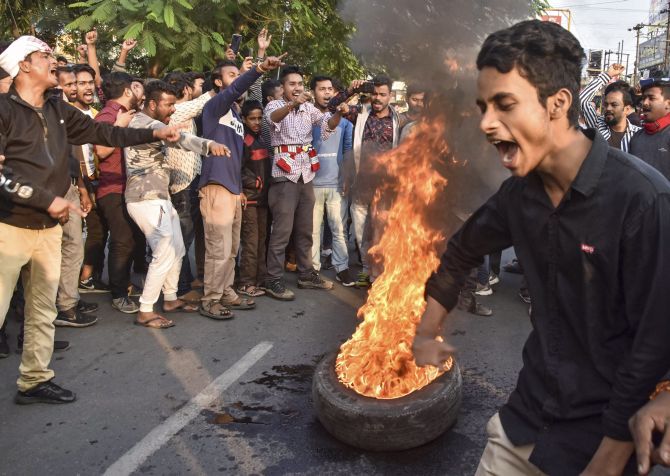 IMAGE: Demonstrators burn tyres during a strike called by All Assam Students' Union (AASU) and the North East Students' Organisation (NESO) in protest against the Citizenship Amendment Bill, in Guwahati, on Tuesday. Photograph: PTI Photo

Internet services will be suspended in 10 districts of Assam for 24 hours, beginning 7 pm on Wednesday, state government officials said, amid massive protests over the Citizenship (Amendment) Bill.

They said internet services will be suspended to prevent misuse of social media in disturbing peace and tranquility, and to maintain law and order.

Internet will be suspended as 'social media platforms like Facebook, Whatsapp, Twitter and You Tube etc are likely to be used for spreading of rumours and also for transmission of information like pictures, videos and texts that have the potential to inflame passions and does exacerbate the law and order situation', the notification said.

It further stated that there have been protests in different parts of the state and there are probabilities of intensifying such protests which may adversely affect the law and order situation.

There are reports in the electronic media that protesters are involved in vandalism which is likely to 'spread serious law and order situation' in the state, it added.

Tens of thousands of protesters against the CAB descended on the streets of Assam, clashing with police and plunging the state into chaos of a magnitude unseen since the violent six-year movement by students that ended with the signing of the Assam accord.

Though no party or student body has called a shutdown, protesters, a majority of them students, fought pitched battles with security forces in the restive state, including in front of the secretariat, the seat of the Bharatiya Janata Party government.

Assam smouldered with protests rocking several parts of the state on the day the Citizenship (Amendment) Bill is being hotly debated in the Rajya Sabha after its passage by the Lok Sabha.

The Citizenship (Amendment) Bill, 2019, which has already been approved by Lok Sabha, proposes to give citizenship to Hindus, Christians, Parsis, Jains, Budhists and
Sikhs facing religion persecution in Pakistan, Bangladesh and Afghanistan.