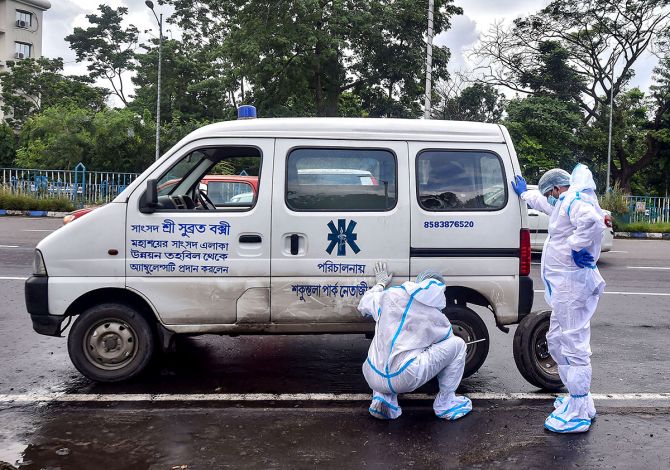 IMAGE: Health workers change a flattened tyre of an ambulance as they transport a COVID-19 patient to a hospital in Kolkata. Photograph: Swapan Mahapatra/PTI Photo

The COVID-19 case fatality rate due to the coronavirus infection has further dropped to 1.64 per cent.

According to the Indian Council of Medical Research, a cumulative total of 5,72,39,428 samples have been tested up to September 13 with 9,78,500 samples being tested on Sunday. 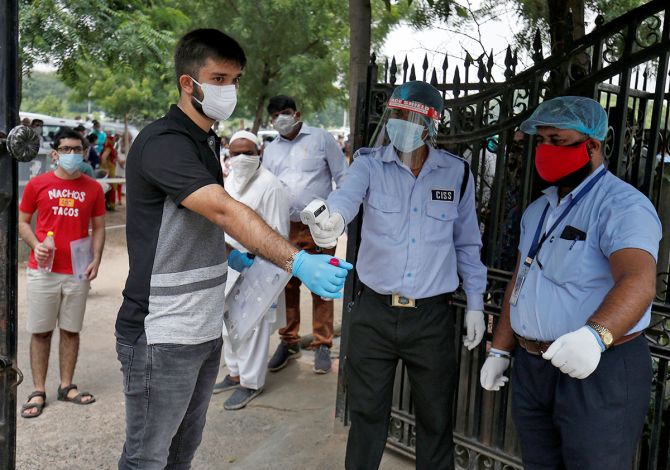 IMAGE: A student wearing a protective face mask gets his temperature measured as he arrives at an examination centre for NEET, in Ahmedabad. Photograph: Amit Dave/Reuters

Of the 1,136 fresh deaths, 416 were reported from Maharashtra, 104 from Karnataka, 80 from Uttar Pradesh, 74 from Tamil Nadu, 68 from Punjab, 66 from Andhra Pradesh, 58 from West Bengal, 34 from Madhya Pradesh, 29 from Delhi, 19 from Haryana, 16 each from Assam and Chhattisgarh, 15 each from Puducherry, Rajasthan and Gujarat, 14 each from Kerala, Bihar and Jammu and Kashmir and 13 each from Jharkhand and Telangana

Twelve fatalities were reported from Uttarakhand, 10 from Odisha, six from Tripura, four each from Goa and Himachal Pradesh, three from Sikkim while Chandigarh, Ladakh, Manipur and Meghalaya have registered one fatality each.

IMAGE: Students wait outside an exam centre as they arrive to appear for the NEET exam in Chennai. Photograph: Anantha Krishnan/ANI Photo

The health ministry said more than 70 per cent of the deaths occurred due to comorbidities.