MEA asks Indians not to undertake non-essential travel to Lanka India on Saturday issued an advisory asking citizens not to undertake non-essential travel to Sri Lanka in view of the recent wave of bombings in which over 250 people were killed.

In the advisory, the Ministry of External Affairs (MEA) said those requiring to undertake emergency travels can contact the High Commission of India in Colombo, the Assistant High Commission in Kandy as well as Consulates in Hambantota and Jaffna for any assistance.

"In view of the prevailing security situation in Sri Lanka in the aftermath of terror attacks on April 21, Indian nationals intending to travel to Sri Lanka are advised not to undertake non-essential travel," it said.

"In case of those undertaking essential/emergency travels, they can contact the High Commission of India in Colombo or the Assistant High Commission in Kandy / Consulates in Hambantota and Jaffna in case of requirement of any assistance," the MEA added.

The MEA said Sri Lanka has beefed up security in the country but a nation-wide emergency including night time curfew has been in place which may affect travel within Sri Lanka.

Sri Lankan security forces are continuing their hunt for members of the NTJ.

On Friday night, six children and three women were among 15 people killed when militants linked to the bombings opened fire and blew themselves up during a fierce gun battle with security forces in Sri Lanka's Eastern province. 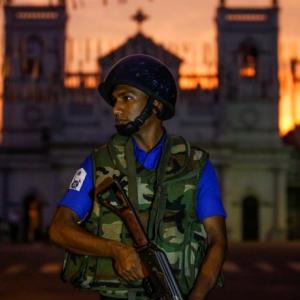