Jaya Bachchan bats for Bollywood in RS; toasted for her speech

Batting for Bollywood on the floor of the Rajya Sabha, MP and veteran actor Jaya Bachchan on Tuesday argued for government support to the entertainment industry and slammed those tarnishing its image. 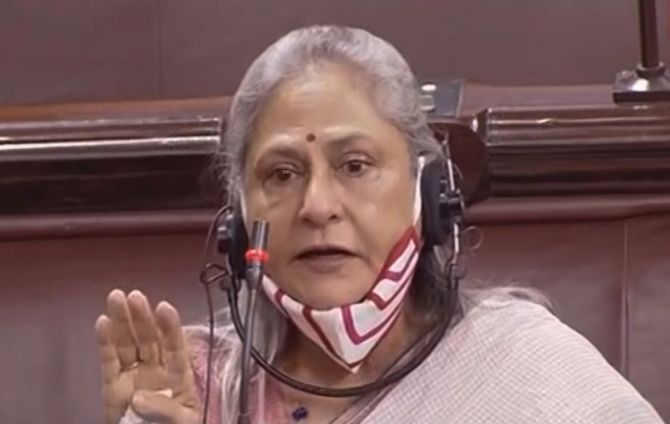 Bachchan's speech, in which she used a Hindi proverb to say those defaming the industry were biting the hands that fed them, earned her fulsome praise from many of her colleagues in Bollywood that has been under a cloud since the death of actor Sushant Singh Rajput in June.

Though Bachchan did not take any names, her speech came a day after Bharatiya Janata Party's Lok Sabha MP and Bhojpuri actor Ravi Kishan said there was a problem of drug addiction in the film industry.

She also said she completely disagrees with those who term the entertainment industry a "gutter", a term used by actor Kangana Ranaut to describe Bollywood in a tweet last month.

Through a Zero Hour mention in Rajya Sabha, Bachchan said the entertainment industry was being flogged by social media and asked the government to protect and support it.

"People who have made a name in this industry have called it a gutter. I completely disagree," she said in a speech that not just made her the toast of Bollywood but was also trending on Twitter for much of the day.

"I was really embarrassed and ashamed that yesterday (September 14) one of our members in the Lok Sabha, who is from the industry, spoke. I am not taking names. It is a shame," Bachchan said in a clear reference to Kishan's statement on the alleged Bollywood drug cartel.

"I think it is very, very important that the government supports this industry and not kill it. Just because there are few people, you cannot tarnish the image of the entire industry," Bachchan said.

"At a time when the financial situation is in a depressing state and employment rate at the worst levels, in order to divert the attention of people, we are being flogged by social media," Bachchan said, adding that there is no support from the government.

The government, she said, must stand by the entertainment industry because it always comes forward to help in times of crisis.

"If there is a national calamity, they come forward, they give money and their services," Bachchan said.

The issue of the alleged nexus between people in the film industry and drug traffickers came up in the Lok Sabha too.

Replying to a question in the Lok Sabha, Union Minister of State for Home G Kishan Reddy said in a written answer that the Narcotics Control Bureau carries out searches, seizures, arrests and investigations continuously throughout the year on actionable inputs developed on its own or received from other sources.

Bachchan's speech trended on social media with many within the industry tweeting and retweeting it and praising the actor for speaking up against the negativity surrounding the film industry since Rajput's death.

The Producers Guild of India, which had come out with a statement to criticise the singling out of the industry as a drug den recently, tweeted Bachchan's speech with the hashtag 'Respect'.

"The Producers Guild of India applauds Jaya ji for standing up for our industry #Respect," it said on Twitter.

The hashtag was used repeatedly.

Ranaut, in the news for her provocative comments, has claimed the movie mafia is behind actor Sushan Singh Rajput's death.

Sharing Bachchan's speech, Sinha wrote on Twitter, "I send my greetings to Jaya ji. For those who don't know, please see this. This is how spine looks like."

Kapoor said, "I want to be her when I grow up."

Pannu said she agreed with Bachchan that the industry has always extended a helping hand in times of crisis and it was now 'payback' time.

"For we have always stood by the initiatives, causes and awareness campaigns. It's time for payback. Hitting the nail on its head and how! Yet again a woman from the industry spoke up #Respect," the actor tweeted.

Other Bollywood celebrities such as filmmaker Zoya Akhtar and actor-producer Nikhill Diwedi also came out in support of Bachchan.

"And yet another woman stands up," Akhtar wrote on Instagram.

Actor-director Farhan Akhtar wrote, "Respect. She has always stood up to be counted when it mattered. #Jaya Bachchan."

Diwedi said a 'false narrative' was being projected about the film industry.

"Jaya Bachchan is right. A false narrative that a certain malaise infects the entire film industry is being created by few to look good in these times...," Diwedi tweeted.

Ranaut, however, struck quite a different tune and asked the 72-year-old actor to be more sensitive to others. She also brought in Bachchan's two children.

On August 26, she wrote, "If Narcotics Control Bureau enters Bullywood, many A listers will be behind bars, if blood tests are conducted many shocking revelations will happen. Hope @PMOIndia under swatchh Bharat mission cleanses the gutter called Bullywood," she had tweeted. Court finds no grounds to not link Rhea to drug case