A special court in Mumbai, in its order on bail plea of actress Rhea Chakraborty, has said at present stage there are no 'reasonable grounds' for not connecting her to the case that relates to drug angle in death of actor Sushant Singh Rajput three months ago. 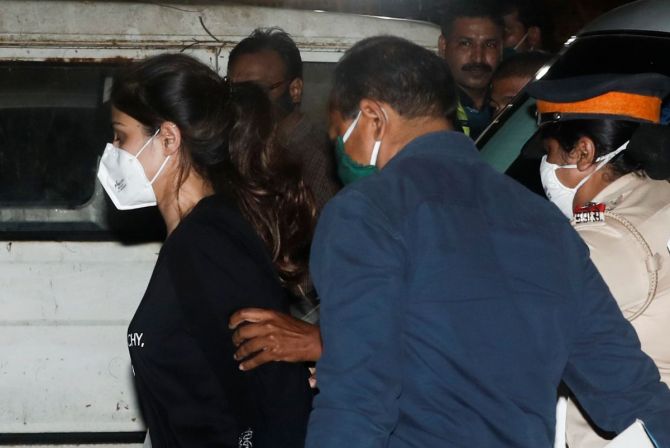 IMAGE: Bollywood actor Rhea Chakraborty at the Narcotics Control Bureau office in Mumbai, after she was arrested. Photograph: Francis Mascarenhas/Reuters

Rhea, 28, her brother Showik and several other persons have been arrested by the Narcotics Control Bureau (NCB) in probe related to drug angle in the Sushant death case.

Special Judge G B Gurao had on Friday rejected the bail pleas of Showik, Rhea Chakraborty and four other accused.

The detailed court order was made available on Monday.

The court stated while deciding a bail plea, it has to record finding that there are reasonable grounds to believe that an accused is not guilty of the offence.

'But it is also to be kept in mind that court does not (have) to consider the material as if it is pronouncing the judgment of acquittal or recording finding of not guilty,' the order said.

It is alleged (by the NCB) that the accused (Rhea) used to procure drug for Rajput.

The accused had asked her brother Showik to arrange for drug from two other accused, Zaid Vilatra and Abdel Basit, the agency had claimed.

Based on material on record, the NCB had recovered WhatsApp chats and other electronic evidence.

Some amount was also transferred via credit card of the accused (Rhea), the central agency had said.

Further, in the present case, commercial quantity contraband (LSD) has been recovered from one of the prime accused, Anuj Keshwani, the NCB had said.

'The investigation is at preliminary stage, therefore, from the available record, it can not be said that there are no reasonable grounds to connect the accused (Rhea) (to the case),' the court observed.

The court also said there is possibility of the accused tampering with evidence if released on bail.

Among other grounds, Rhea's lawyer Satish Maneshinde had submitted that no contraband has been seized from the accused and rejected allegations she procured drug for Rajput.

Allegations, if any, would pertain strictly to small quantities of drug, Maneshinde had said.

The quantity of the said drug (ganja) was small and at the most, the accused can be convicted for one year and thus, the offence is bailable, he had added.

However, according to the prosecution, the accused was involved in illicit trafficking of drug.

She financed drug for Rajput, her boyfriend, and therefore, committed an offence punishable under section 27-A of the Narcotic Drugs and Psychotropic Substances Act (NDPS Act), the prosecution had told the court.

The judge observed that there are specific allegations that she was involved in crime punishable under section 27(A) of the NDPS Act and therefore, the offence is non-bailable.

'It is pertinent to note that in section 27(A) of the NDPS Act, no particular quantity of the drug is required to prove the offence,' the judge added.

The court made almost similar observations while rejecting the bail plea of Showik.

The court also refused to consider Rhea lawyer's argument that her statement was recorded forcibly and no lady officer was present when she was being interrogated.

'At this stage, when the investigation is at preliminary stage, it can not be said that the said statement of the accused was forcefully recorded and (was thus) inadmissible as evidence,' the court added.

Meanwhile, Maneshinde said he would study the order before deciding on moving the Bombay high court for bail.

'We will study the order, its implications and developments in the case at the NCB-level and then decide (on moving the HC),' the lawyer added.

Earlier, the NCB had said although the quantity of banned drugs seized in the case was small, it was still of commercial quantity and worth Rs 1,85,200.

'Rhea Chakraborty and Showik Chakraborty financed and arranged drugs for Sushant Singh Rajput and at his instructions,' the NCB had said in its affidavit filed in the court in response to their bail pleas.

The central agency had said as per a statement given by co-accused and Rajput's domestic help Dipesh Sawant, he used to procure drugs from other accused in the case on instructions of the late actor and Rhea.

'Financial transactions were handled by Rhea and sometimes Rajput. Dipesh Sawant used to procure drugs along with co-accused Samuel Miranda (former house manager of Rajput) for Sushant Singh Rajput's consumption,' it had said.

The NCB had further said if the accused are released on bail, they may tamper with evidence and try to intimidate key witnesses in the case.

The NCB began its investigation after the Enforcement Directorate (ED), which was probing money laundering charges linked to the case, shared social media chats retrieved from Rhea's mobile phone, hinting at use of banned drugs.

Rajput was found hanging in his flat in suburban Bandra on June 14.

The Central Bureau of Investigation (CBI) is separately probing a case against Rhea and others for allegedly abetting the 34-year-old actor's suicide. 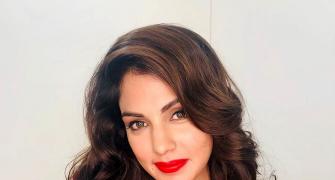