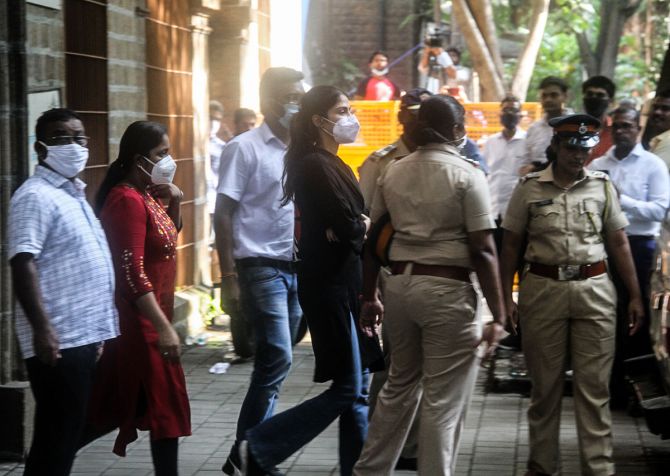 Supreme Court lawyer Sanjay Hegde feels Rhea's arrest in a drug case by the NCB is weak and will not stand in a court of law.

"I am sure the prosecution will fail in this matter against Rhea. At best, the consumption of a small quantity will not involve any prison sentence," Hegde tells Syed Firdaus Ashraf/Rediff.com.

Your first reaction to Rhea's arrest?

It does appear that three agencies probing various aspects have a mandate to see that this lady is arrested.

The drug case does not seem to be directly proximate to any of the events that led to the death of Sushant Singh Rajput because she had left their house on June 8 and the death occurred on June 14.

This is what I am reminded of for Rhea.

When she left on June 8 after some kind of fight or break-up she did not think Sushant would die.

She did not think his family after his death would level such horrible accusations against her.

She did not think three agencies would be tasked to prove her to a bad woman.

Did the Mumbai police do a bad job in its probe?

All it said was since the Bihar police is also involved and there appears to be some political problem, so it is better for the case to be sent to the Central Bureau of Investigation.

Do you think Sushant's family should have gone to the Bombay high court rather than the Patna police as this gave a political turn to the case, and it became the Bihar government versus the Maharashtra government?

That is for the family to decide. They sat quiet for 40 days and they are perfectly entitled to file an FIR near their house, but no police force has the right to intrude into another state.

Politicisation of one side was matched with politicisation of the other side and therefore the Supreme Court of India said let us send the case to a third, seemingly apoliticised, organisation.

Rhea's lawyer Satish Maneshinde called it a travesty of justice.

He is fighting for his client and he has the right to say that.

It looks like many wanted Rhea to go to jail and they have already decided she was guilty.

There was a selective bloodlust that was unleashed on Rhea, the film industry and the Mumbai police.

Bloodlust sometimes demands a show which has been today provided.

The question of Sushant's homicide or murder, nobody seems to be asking that question and it looks like that has gone out of the window.

For the moment this question has gone out of the window. The issue has not been closed and the issue won't be closed until the medical team says something conclusive.

What is the next step for Rhea?

She will apply for bail and she will get a period of time or it may get delayed.

I am sure the prosecution will fail in this matter against Rhea. At best the consumption of a small quantity will not involve any prison sentence. 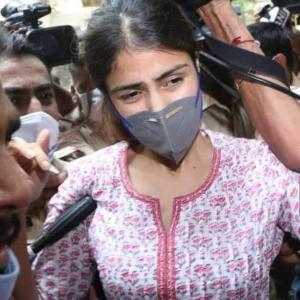