Chairman of All Parties Hurriyat Conference Syed Ali Shah Geelani on Saturday condemned the hanging of Afzal Guru, saying the latter was not involved in the 2001 Parliament attack and was also not given a chance to defend himself in connection with this case.

Geelani said Guru's hanging at the Tihar Jail on Saturday morning is a matter of sorrow and pain for the people of Jammu and Kashmir.

"After Maqbool Bhat (Kashmiri nationalist) ‘Sahab’ was hanged in the same manner on February 11, 1984 in Tihar Jail, it is the second big blow for the people of Jammu and Kashmir. We declare it as an injustice because our stand on Afzal Guru Sahab is that he was not involved in the Parliament attack. Personally, he was not involved in the attack. He was not given the chance to defend himself in the trial court," said Geelani.

"On the basis of that, I can say that the punishment given to him is an injustice and I condemn this. Even his wife, son and relatives were not informed about the execution. His family members should have been given a chance to meet him prior to the execution," he added.

Geelani also condemned the curfew that has been imposed in Kashmir Valley after Guru's hanging.

Disapproving the government's decision, the separatist leader further said that he has given a three-day strike call in the Kashmir Valley in this regard.

"We have also given a three-day strike call in Kashmir Valley. The strike will go on till Afzal Guru's body and his other valuables are handed over to his family members," said Geelani.

Meanwhile, Hilal Ahmad War of the hard-line faction of the All Parties Hurriyat Conference criticised the hanging of Afzal Guru and warned of revengeful action.

"We will give a response to this to India. We will take revenge. We condemn this action of India. India wants war. This is a provocation. We will call for a strike and will respond to India on this. The situation will go back to that of 1990s, and the condition of Kashmir will be spoilt," he said.

Curfew has been imposed in all ten districts of Kashmir Valley as a precautionary measure.

Scores of personnel of the Central Reserve Police Force and the state police have been deployed in Srinagar and other sensitive parts of the valley.

According to reports, the people residing in majority areas in the Kashmir Valley, including Srinagar, Baramulla, Sopore, Anantnag and Pattan, have been issued directions to remain at home.

Sensitive areas of the state have been sealed and the army is also on high alert. 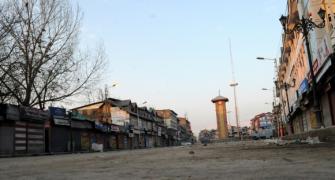