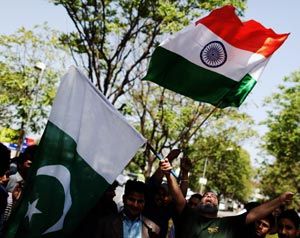 Pakistan's Interior Minister on Monday alleged that Hindu "extremist groups" like the Rashtriya Swayamsevak Sangh and the Shiv Sena are the "biggest hurdle" to normalisation of Indo-Pak ties as he asked External Affairs Minister Sushma Swaraj to name the "forces" which she said are against good bilateral relations.

"If the Indian foreign minister is serious and determined for (good) ties with Pakistan, then she should not talk through riddles or try for political point scoring. In fact, she should clarify and point out which forces in her opinion were against good ties between Pakistan and India," Interior Minister Nisar Ali Khan said.

Khan was reacting to Swaraj's remarks that there are forces which do not want good relations between the prime ministers of the two countries and better ties between the two neighbours.

The Pakistani minister said in his opinion "extremist groups like the RSS, the Shiv Sena and the Abhinav Bharat were the biggest hurdle in the way of normalisation of ties as such groups have influence over the Indian government."

"If the Indian government was serious in normalisation of ties, then why it has closed doors for talks," Khan said.

He also criticised Prime Minister Narendra Modi's speech in the United States Congress, sarcastically saying that "each word used by him showed his friendship policy" for Pakistan.

Khan said Sharif's relations with any world leader were above his personal relations and Indian foreign minister should not try to portray Sharif-Modi relations as personal.

Swaraj on Sunday said Pakistan has not refused to allow an National Investigation Agency team to visit that country to probe the Pathankot airbase attack case and just sought "more time".

She had said the "warmth and ease" in relationship between Modi and Sharif can help resolve complex issues between the two neighbours.