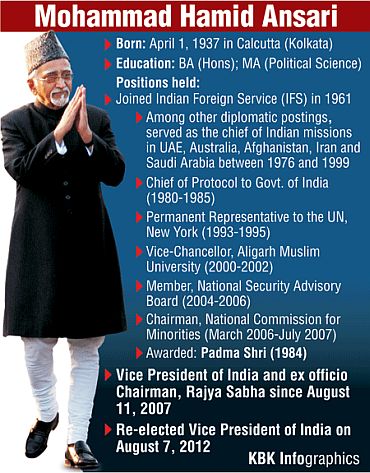 United Progressive Alliance candidate Hamid Ansari was on Tuesday re-elected as Vice President, becoming the second person to get the second consecutive term as he defeated National Democratic Alliance nominee Jaswant Singh by a large margin of 252 votes.

75-year-old Ansari, a former IFS officer, got 490 votes against 238 bagged by Singh out of 736 votes polled earlier in the day.

Altogether 787 Members of Rajya Sabha and Lok Sabha were eligible to vote but 47 MPs did not cast their votes, who include ailing Union Minister Vilasrao Deshmukh who is admitted in a Chennai Hospital.

Ansari is the second Vice President to be re-elected after S Radhakrishnan who was the first to get two terms from 1952 to 1962.

An affable and well-read person, Ansari was the second choice of Congress President Sonia Gandhi for the President's post and lost out to Pranab Mukherjee due to some brinkmanship by TMC leader Mamata Banerjee and SP leader Mulayam Singh Yadav.

Formerly the Vice Chancellor of Aligarh Muslim University, Ansari's name came as a surprise in 2007 election when the Left parties, supporting the UPA-I from outside, proposed him and the Congress-led alliance accepted it.

The Left parties, which faced divisions on the Presidential poll, however, had no problems in supporting Ansari for a second time.

Parliamentary Affairs Minister Pawan Kumar Bansal said 21 members from BJD, 11 from TDP, 6 from Congress and supporting parties and two nominated members did not cast their votes.

Others who did not vote include 2 each from BJP, AGP, RSP and TRS and Y S Jaganmohan Reddy, one of the two members of YSR Congress.

BJP members who did not vote were Shatrughan Sinha, who is was sick, and Dilip Singh Judev, whose mother was not well.

Out of the total 790 members of both Lok Sabha and Rajya Sabha that form the electoral college for Vice Presidential poll, 3 are vacant with Pranab Mukherjee becoming President, Vijay Bahuguna Chief Minister of Uttarakhand and the election of BJP MP J Shanta having been set aside by a high court.

A Padma Shree awardee, Ansari became Vice-Chancellor of the Aligarh Muslim University in May, 2000 and held the post till March, 2002.

In the last five years, the Rajya Sabha Chairman carried himself well but he courted controversy after abruptly adjourning the House on the last day of the last Winter session when a debate was underway on the Lokpal Bill and voting was expected to take place.

BJP was critical of the adjournment decision alleging it was done to rescue the government from a possible embarrassing defeat. The main opposition party cited it as one of the reasons for putting up a candidate against him in the current election.

Ansari also tried to innovate in the House proceedings when he shifted the Question Hour to post-lunch session to avoid loss of opportunity for members to question the government on account of routine disruptions in the morning.

The move was given up after just a session when he found the members themselves being absent from the House when their questions were taken up and the government also not very enthusiastic about the move.