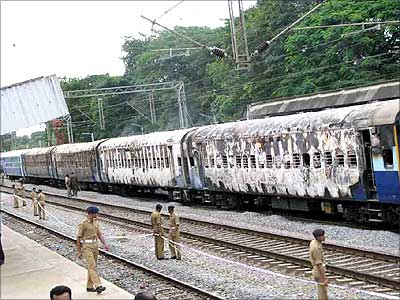 Two coaches of the Gautami Express were gutted in a massive fire in Warangal district in the wee hours of Friday, killing at least 32 passengers, the police said. The train was traveling from Secunderabad to Kakinada.

Warangal District Superintendent of Police VC Sajjanar said that the fire broke out in coach S-10 at around 1 am and spread to four other bogies. The accident occurred soon after the train had crossed K Samudram station on the Warangal-Khammam section.

"The passengers pulled the chain to stop the train immediately and people started jumping out of the train," he said.

The passengers were fast asleep when the fire broke out. The victims included three handicapped persons and a pregnant woman.

Soon after the fire broke out, the crew of the train acted quickly and separated the engine and 8 other bogies from the burning coaches.

The cause of the fire is yet to be established. But Sajjanar said that a short circuit could have caused the fire, which destroyed five bogies.

A special relief train was sent from Secunderabad with medical staff and it has reached the accident site.

As the train had stopped at a spot that is not accessible by the road, it was difficult to conduct relief and rescue operations.

"We have to walk for two kms to reach the scene of the accident, which is about five kms from K Samudram station," Sajjanar said.

The seriously injured victims were first taken to nearby Mypadu hospital and later shifted to Warangal.

As the parallel line was open for the traffic, a special train was being arranged to take the stranded passengers to their destinations.

The accident has brought train services to a halt on the Warangal-Khammam section and many long distance trains have been diverted or stopped. The Delhi-Visakhapatnam Hazrat Nizamuddin Express was stopped at Warangal. The Nizamabad-Tirupati Express and many other trains have been cancelled.

State Minister for Animal Husbandry G Surya Rao was one of the passengers of the train but he escaped unhurt. Rao said that the fire broke out when the train was passing through a dense forest. "While the fire was raging on one side, there was complete darkness on the other. Except the railway line, there is no other way to access this place", he said.

According to officials in charge of the rescue operations, several badly charred bodies were found in both the compartments.

"We can count the bodies only with the help of the skulls. Otherwise, the bodies are charred beyond recognition," said Janardhan Reddy, district collector of Warangal.

Some of the eyewitnesses said that due to the intensity of the blaze, the doors of compartment S 10 got jammed and the people inside could not escape. "Those who could move, rushed towards S-9 coach but the others were caught in the fire. I saw one person screaming and crying for help," said one of the passengers.

The survivors recounted horrifying moments after the fire broke out. "I saw flames every where and the smoke was suffocating me. I could come out with a great difficulty," said a young girl while she was being taken to the hospital.

Only two of the victims could be identified as Bhagya Lakshmi Rajahmundry and Dr Sarita from Amalapuram.

Chief Minister Y S Rajasekhara Reddy, who was on his way to the accident site, said that the railway officials were looking in to the cause of the fire.

Expressed his shock and grief over the accident, Reddy said, "The railway officials need to be more alert."

A team of Forensic officials is on its way to the accident site to determine the cause of the fire.