News
Business
Movies
Sports
Cricket
Get Ahead
Money Tips
Shopping
Sign in  |  Create a Rediffmail account
Rediff.com  » News » BJP in Bihar hitting out at LJP due to Nitish: Chirag Paswan

BJP in Bihar hitting out at LJP due to Nitish: Chirag Paswan

A day after Union Home Minister Amit Shah asserted that the National Democratic Alliance in Bihar constitutes just four parties and the Lok Janshakti Party was its contender, the regional outfit's president Chirag Paswan said on Sunday that the saffron camp leaders were hitting out at him under pressure from Janata Dal-United boss and Chief Minister Nitish Kumar. 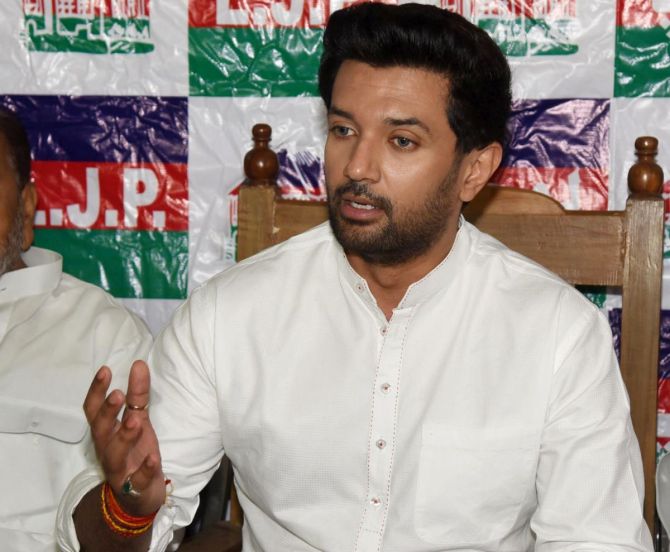 Paswan also said that BJP leaders were free to throw barbs at the LJP, as part of their "coalition dharma", but he would always hold Prime Minister Narendra Modi in high regard.

"Amit Shah was right. We have decided to fight Bihar elections on our own and not as part of the NDA. But that doesn't mean one has to sever personal ties.

"I will continue to respect Prime Minister Narendra Modi, who stood by my family when my father and LJP founder Ram Vilas Paswan was undergoing treatment in Delhi," he said.

The LJP founder and minister for consumer affairs, food and public distribution died on October 8 at the age of 74. He was one of the country's prominent Dalit leaders.

"Modi ji would call me daily when my father was in the hospital and give me hope that things would be better. He stood by my family. Chief Minister Nitish Kumar, however, had no concern for us," the LJP chief told reporters at Janardan Ghat on the banks of river Ganga, where he had gone to perform rituals for the peace of his deceased father's soul.

Asked about Shah's contention that the NDA would form the next government in Bihar with a comfortable margin, Paswan said, "it is welcome to do so if it gets the numbers".

"If it falls short, however, the LJP might support the coalition, provided Nitish Kumar is not placed at the helm. He can be adjusted somewhere at the Centre.

"Some BJP leaders are speaking against the LJP because pressure was being exerted on them by Kumar. They are free to speak against us in conformity with their coalition dharma," he maintained.

The BJP, on its part, has clearly stated that it had nothing to do with Paswan's party, which has dissociated itself from the NDA.

Shah had said in an interview to CNN News18 on Saturday that Nitish Kumar will be the next chief minister of Bihar, even if the BJP gets more seats that ally JD-U.

On LJP breaking away from the ruling alliance in Bihar, Shah had said the party was offered an adequate number of seats but it chose to walk away.

"It was their (LJP) decision, not ours," the Union home minister had added.

The LJP which initially said it would go all out against the JD-U, headed by Kumar, has pitted nearly half-a-dozen nominees against the BJP, too.

The party which enjoys considerable support among the Dalits, particularly the Paswans, has announced the names of 95 candidates so far in two lists. Paswans constitute four to five per cent of the total voters in the state.

The regional party has fielded its candidate against Satish Kumar of the BJP in Raghopur. RJD's Tejashwi Yadav is also a contender for the seat.

The Paswan-led party, however, refrained from nominating anyone in Jamui, where the saffron camp has named Commonwealth gold medallist shooter Shreyasi Singh as its candidate. The LJP president, who is also the Lok Sabha representative from Jamui, has, however, pledged support for Rashtriya Janata Dal's nominee from the seat, Vijay Prakash.

The party, which has a bungalow for a symbol, is currently giving shelter to JD-U and saffron camp deserters, who left after being denied a ticket for the polls.

Although the LJP had been making tall claims that it would emerge as the "kingmaker" in the state polls, the party has to bear in mind that its performance in 2015, when it tied up with the BJP to fight against the Grand Alliance -- then consisting of the JD-U, the RJD and the Congress -- was not very impressive.

The party managed to bag just two of the 41 seats it had contested. Notably, Pashupati Kumar Paras, younger brother of Ram Vilas Paswan, who is currently the Lok Sabha MP from family pocket borough Hajipur, had lost the election from Alauli (reserved seat) in Khagaria.

Asked to comment on Amit Shah's assertions, RJD leader Tejashwi Yadav said he has not seen the interview.

His party spokesman Mrityunjay Tiwari said, "The BJP would carry Nitish Kumar (on its shoulders) only till the results are out. After November 10, it will dump him."

Congress leader Prem Chandra Mishra claimed "nobody is ready to believe that the BJP has broken off ties with the LJP". 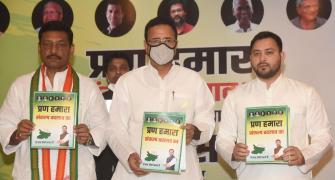 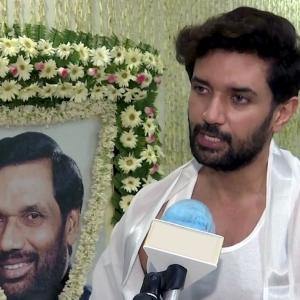