The Rashtriya Janata Dal-led Grand Alliance (GA) on Saturday released its joint manifesto for the upcoming Bihar assembly elections, promising to offer jobs to 10 lakh youngsters and repealing the new farm laws recently enacted by the central government if they are voted to power. 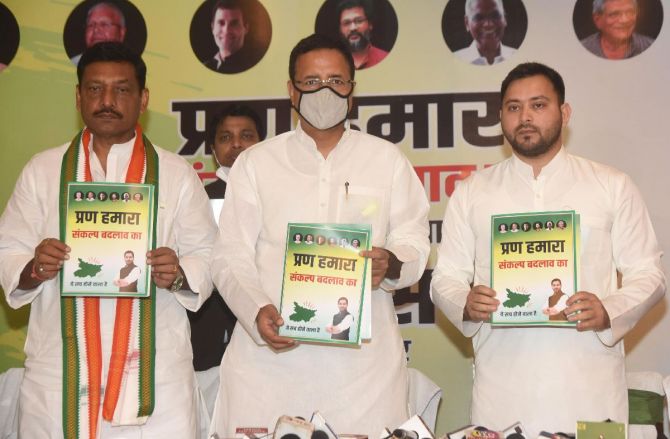 Releasing the manifesto titled 'Badlav Ka Sankalp' (commitment to change) in the presence of All India Congress Committee (AICC) general secretary Randeep Singh Surjewala and other Mahagathbandhan leaders, Tejashwi Yadav said their government, if elected, would first approve the process for appointments on about 10 lakh jobs in the government.

"Contractual teachers would be entitled for same pay for same work, for which they have been agitating for long," said Yadav, who is the opposition chief ministerial candidate.

Assuring the people that the coalition will stand by its commitments, Yadav said that they were not leaders who conveniently forget their promises and that the state has still not been accorded a special status -- a demand echoed for years by political parties in Bihar.

"(Donald) Trump will not come to accord special status to Bihar, which was once promised by the Prime Minister," said Yadav, in an apparent reference to Prime Minister Narendra Modi's ties with the United States President.

Kumar has raised the issue of granting special status to the land-locked Bihar several times, both during the Congress-led United Progressive Alliance and the Bharatiya Janata Party-helmed National Democratic Alliance -- which could bring investment into the state by providing concessions in taxes to prospective industries.

Surjewala said that the first assembly sitting of the GA government would see annulment of the three controversial farm acts that, he alleged, defeat the objectives of green revolution in the state.

Nitish Kumar government was the first in the country to do away with the APMC (Agriculture Produce Market Committee) Act in 2006.

"If we form the government, under the leadership of Tejashwi Yadav, we will pass a Bill in the first Vidhan Sabha session to scrap the three anti-farm laws.

"Can PM Modi and Nitish tell us that if all mandis are destroyed then how will the farmers get MSP," Surjewala asked.

Identifying unemployment as a big issue, Tejashwi Yadav reiterated 'we will approve 10 lakh jobs in the state government in the very first cabinet of the alliance government if voted to power'.

Focusing on crimes against women and children in the state, the GA leaders said many perpetrators of gang rape against minors at Muzaffarpur shelter home were still at large.

Waiver of fee for competitive examination for jobs and helpline for migrant workers were also been promised in the manifesto.

Countering charges of 'inexperience', Yadav said that the vision for development did not necessarily come with age.

Kumar without naming Yadav has been speaking about 'inexperience' of the young leadership of the opponents who he said don't know how to work or get the work done from others.

"As the deputy CM, we have laid the foundation of development with great vision. I was a minister of road construction department, proposed development of dedicated expressway to connect the Bihta airport. Many state highways were converted as the national highways (NHs), said Lalu Prasd's younger son who was the deputy CM before Janata Dal-United left Mahagathbandhan.

Yadav further alleged that more than 60 scams have taken place under chief minister Nitish Kumar's government in Bihar and that the Janata Dal (United)-BJP combine had stabbed the states people on their backs.

Surjewala accused Bihar chief minister of 'cheating the people of Bihar' by walking out of the grand alliance in whose favour they had voted in 2015, and said the election is meant to give a new direction to the state which is suffering from 'misrule'.

Taking a swipe at the BJP, the Congress leader said, the saffron party is part of three alliances in the current Bihar polls -- one with the JD-U, another with Lok Janshakti Party and third one with All India Majlis-e-Ittehadul Muslimeen (of Hyderabad MP Asaduddin Owaisi).