Five security forces personnel, including two officers, went missing during an anti-militancy operation in Kupwara district of Jammu and Kashmir on Saturday, even as two unidentified terrorists were killed in another encounter in Pulwama, officials said. 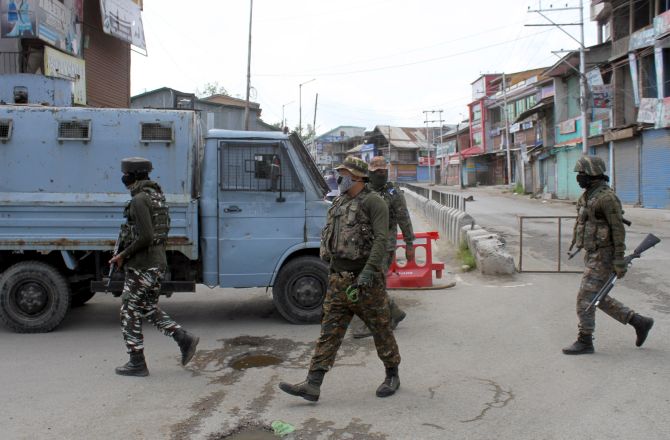 IMAGE: Security personnel in action during an encounter in Pulwama on Saturday. Photograph: Umar Ganie for Rediff.com

Security forces launched a cordon and search operation in Chanjmulla area of Handwara in the north Kashmir's Kupwara district on Friday following inputs about the presence of terrorists there, a police official said.

He said the security forces maintained a tight cordon and conducted searches in the area.

However, contact with terrorists was established on Saturday evening and an encounter ensued, the official said.

While the official gave no further details, Army sources said five security forces personnel have gone missing as contact has been lost with them.

The Army sources said the five personnel include two officers.

According to the sources, a hunt has been launched to trace the missing personnel, while the operation to neutralise the terrorists was also on.

The security forces launched a cordon and search operation in Dangerpora area of the district in the wee hours of Saturday following specific information about the presence of militants in the area, the police official said.

He said as the forces were conducting searches in the area, terrorists fired upon them.

The forces retaliated, ensuing an encounter in which two terrorists were killed, the official said.

He said the identity and group affiliation of the slain ultras was being ascertained.

The security forces recovered arms and ammunition from the encounter site, he added.